CIAN urges Nigerians to strategise ahead of 2023 for right leadership 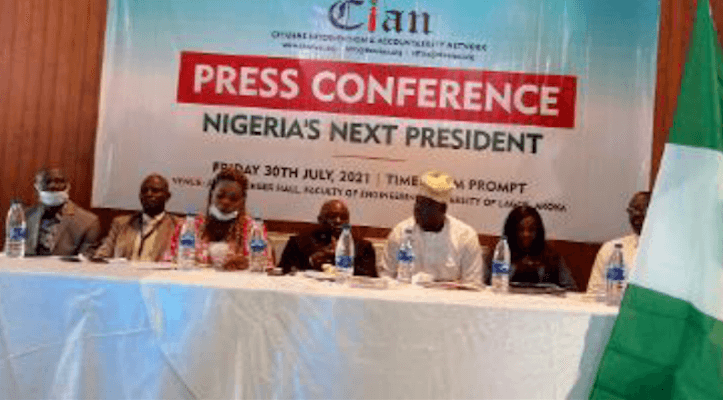 Citizens Intervention and Accountability Network (CIAN), a non profit-making organisation, has urged Nigerians to strategise ahead of 2023 for purpose-driven and charismatic leadership across all elective positions in the general elections.

The NGO with a vision to provoke fresh thinking, made the urge at a press conference held recently at the University of Lagos, where it reminded the citizens that it is time to take destiny in the hands, and start now to strategise rather than waiting for 2023.

Also concerned with the state of the nation and need to use the votes rightly to change poor leadership come 2023, CIAN called on the need to start now to set an agenda for the president, and sensitization of the masses on the need to vote into elective positions, the kind of leaders that will move the country to greater heights.

Speaking at the press conference, Olawunmi Olaniyan, committee chair of the forum, explained that the purpose of the gathering was to point to the people of Nigeria the way to get the right-minded leadership that will inspire positive changes in the nation.

“The focus of today’s press conference is to inform Nigerians about its intervention and resolve to lend a helping hand and be a part of the solution to addressing the country’s recruitment process”, he said.

Following the recent rumblings in the National Assembly over Section (2) of the Electoral Amendment Bill 2021, Olaniyan challenged the citizens not to fold their arms and watch the country drift to a one-party system. He described what happened in both chambers of the National Assembly as a disgrace and a complete betrayal of the public trust.

“Going forward, as a people-oriented organisation, we would not fold our arms, and leave this parliamentary coup unchallenged, especially at a time when the power sector has repeatedly become a graveyard of failed promises, at a time when emerging trends about those who assume power in Nigeria suggest accident of history, at a time when religion is seemingly becoming our nemesis.”

Olaniyan established Nigeria’s next president as a civic empowerment project, designed to ignite a departure from the failed social contract between the ruling elite and the Nigerian peoples, including fostering eternal vigilance, inspiring civic responsibility, and stirring civic activism that will challenge convention and demand accountability from elected officials.

To widen the empowerment resource-materials so as to get to a larger audience and have greater impact on the general voting public, the majority of whom are unlettered in the English Language, CIAN has embarked on the first phase of its national project with its translation into Efik, Hause, Igbo, Yoruba, and Pidgin English while planning local language translations in subsequent phases.

In a keynote address Candy Fidel Onwurah Okoye, committee director of information and strategy, CIAN, wondered why Nigeria is abundantly endowed with human and material resources but lacks the leadership capacity to actualise its potentials.

Onwuraokoye argued that fairness in politics cannot be entrenched into the Nigerian system with the concept of power zoning, power shift, power rotation or national unity through an illegality because such ideas are not only alien but also breeds laziness in creativity and innovation.

He stressed that the next Nigerian president could emerge from any region of the country provided that the leadership met the yearnings and aspirations of the people.

“It does not matter if Nigeria’s next president is from the north or south. What matters is good governance. The population needs jobs, education, good roads, pipe-borne water supply, 24-hour electric supply, clean environment, health services among others. The electorates should be allowed to elect the best candidates in a free and fair election”, he said.

On the controversial Electoral Act, the CIAN director of information and strategy alarmed that it portends serious implications for the country as it is replete with insights into a subject-matter about which the people must remain vigilant.

For Rev. Tonia Omonze, deputy director of strategy, CIAN, the question of where the next Nigeria president comes from, age-bracket, among others lie in the fact that there is no perfect president or leader in the entire universe and Nigerians should accept that.

Omonze challenges Nigerians to look for a man who has a heart to lead the people as president that can always defend, protect, seek the progress of, create opportunities for greatness, and most of all, serve the people.

In a Book Summary titled: The Nigeria’s Next President: The Basis, The Issues and The Expectations, by Move O. Jeje, president of CIAN, he noted that the failure of the Nigerian State to do the needful in governance resulted in economic stagnation with attendant despair and lack of trust in the system on the part of the people.

Jeje lamented that the failure of the Nigeria government to demonstrate leadership capacity emboldened the non-state actors to step up their criminal activities.

“With the uprising of the terrorist group Boko Haram, who has killed tens of thousands of people, and displaced more than 2.7 million from their homes in frequent attacks, a new chapter was opened in Nigerian history”, he said.

The university challenged the Nigerian electorates to engage constructively in righting the faulty leadership recruitment process by ensuring that they do not only vote for the right leaders but also insist on accountability.

At the conference, CIAN announced that it would launch the book Nigeria’s Next President on December 23, 2021. The launch will feature an essay competition themed: Who Do You Think Is Ideal Nigerian President? The winner will be presented with a cash award and other incentives.

High cost of elections and the Nigerian economy