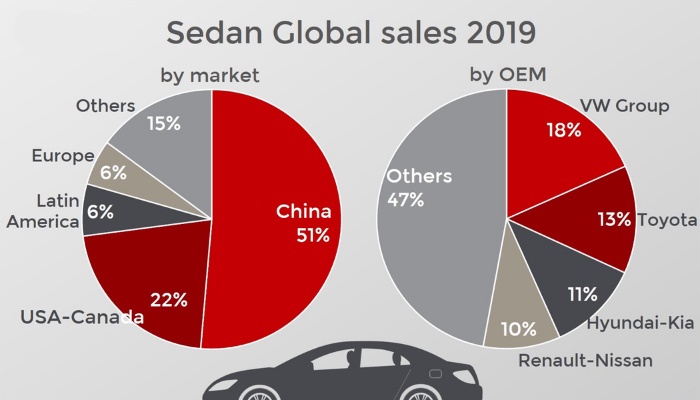 When it comes to cars, it does not take much to know which brand is superior in terms of fame in the automobile market. Various vehicle platforms have established Toyota’s dominance in the global automobile industry.

Also, it has been the most valuable automaker in the world for many years before being overtaken by Tesla, Toyota, a Japanese automaker, had the best-selling vehicle in 41 countries out of the 104 countries tallied, according to VisualCapitalist, an online data-driven platform.

The company also had the world’s best-selling vehicle in 2019, the Toyota Corolla, one of its sedans which took the top spot in five countries.

BusinessDay had recently published a story about the popularity of the sedan in Nigeria, especially in the northern region where more people in the region are searching for it. 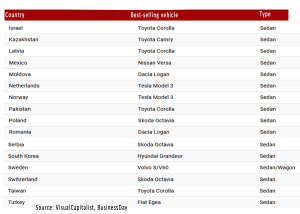 But generally, sedans—four-door cars—are the second most popular car types around the world. Even though sport utility vehicles (SUVs) are strong competitors in terms of popularity, forcing some automakers such as Ford to focus production primarily towards SUVs, sedans are still a viable option for many drivers globally.

In 2019, global vehicle production reached around 92 million units. Sedans accounted for approximately 19 million of those vehicles. With roughly one in five vehicles being a sedan, the demand is still prominent.

The Toyota Avalon Toyota Corolla, Toyota Camry are some of sedans from the Japanese manufacturer, as found by BusinessDay, the Corolla and Camry sedans are also highly demanded across the world, particularly in countries like Ireland, Israel, Kazakhstan, Latvia, Pakistan, and Taiwan.

Despite the competition Sedans are witnessing from SUVs, better fuel economy, like the Corolla, is a factor that is still keeping sedans in the market, as some sedans and SUVs share the same engine BusinessDay learnt. 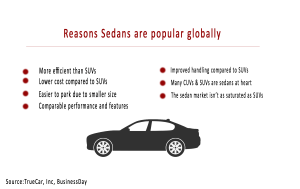 TrueCar, Inc, an automotive pricing and information website, believes that sedans will continue to be in demand because of its cost-saving tendency compared to SUVs. With smaller components, drivers can spend less money on basic maintenance such as replacing tires and brake pads. According to them, even a car wash can cost less, since a sedan takes less effort to clean.

The organisation also highlighted ‘improved handling’ as a major competitive edge that sedans have over other car types. They said sedans are designed with an inherent advantage when it comes to superior handling.

“They’re lighter, lower to the ground and easier to drive. Many sport sedans also feature rear-wheel drive, which can make twisty roads a thrilling experience,” the website wrote.

But it is not all saccharine for the sedans. While their sales totalled 18.85 million units, equating, their volume fell by 6.8 percent and total market posted a 4 percent decline.

JATO Dynamics Limited explained that the decline in sales was largely because over half of the vehicles sold globally were in China.

It said that Chinese consumers had favoured compact sedans, but the arrival of new and more appealing SUVs combined with the plummet of the economy has dramatically changed the outlook for manufacturers.

A similar shift occurred in the USA which previously experienced large levels of consumer demand for sedans. According to JATO Dynamics Limited, in 2009 the sales of sedans accounted for 39 percent of total market. Moreso, in 2019, Asian brands controlled 67 percent of the sedan segment in the USA. JATO’s data shows that the market share for sedans dropped significantly to just 22 percent.

Nonetheless, the sedan is not dead.