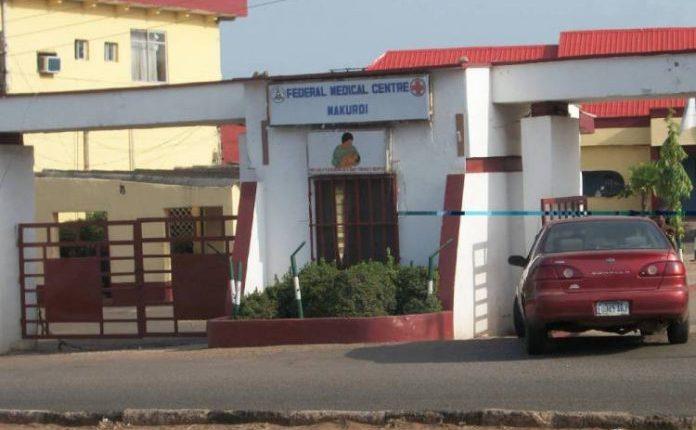 Federal Medical Center, Makurdi, Benue state under the leadership of the current Medical director, Dr Inunduh Peteru has achieved alot in diverse sphere both in fighting the world pandemic and normal operatives which are that of saving lives and sensitising the public on deadly diseases among many others.

The outbreak of the deadly novel coronavirus otherwise known as Covid-19 last December 2019 in Wuhan City, Hubei province of China, the world has been transformed and affected in ways never before imagined. Social activities have been restricted and, in some cases, suspended, economic impact of the dreaded disease has been notably felt in the aviation, tourism, manufacturing, export and import sectors among others with tens of billions of dollars lost in revenue with the attendant job losses as well as closure of industrial plants in the most affected countries.

The administration of Inunduh Peteru had been monitoring the global trends occasioned by the destructive outbreak of the virus and taken steps to prepare for any eventuality in the State by creating a standard isolation unit for Corona virus victims at apir in Makurdi Benue state capital.

The Managing director secondly sensitised the people of the state that about the deadly diseases saying, “coronavirus disease (COVID-19) is an infectious disease caused by a new virus.
The disease causes respiratory illness (like the flu) with symptoms such as a cough, fever, and in more severe cases, difficulty in breathing. You can protect yourself by washing your hands frequently, avoiding touching your face, and avoiding close contact (1 meter or 3 feet) with people who are unwell.

Coronavirus disease spreads primarily through contact with an infected person when they cough or sneeze. It also spreads when a person touches a surface or object that has the virus on it, then touches their eyes, nose, or mouth.

There’s currently no vaccine to prevent coronavirus disease (COVID-19).
You can protect yourself and help prevent spreading the virus to others if you:

Wash your hands regularly for 20 seconds, with soap and water or alcohol-based hand rub
Cover your nose and mouth with a disposable tissue or flexed elbow when you cough or sneeze
Avoid close contact (1 meter or 3 feet) with people who are unwell
Stay home and self-isolate from others in the household if you feel unwell.”

Federal Medical Centre battle for the world pandemic started real on the 4th May 2020 when they admitted, managed and successfully discharged her first case of covid-19 (index case) on the 5th May 2020 at the Isolation center Apir whose name was made known as Mr. Edward Faasema Manger.

Again on the 15 may 2020 the FMC discharged the 2nd case of the virus in the state, Edward Manger from the same Quarantine Centre located at the Federal Medical Centre (FMC), Makurdi.

The 3rd and 4th case being the minor was in high spirits and responding well to treatment on the same day that the 2nd case was discharged with the possibility that they could be discharged in due course if their subsequent tests come through as Negative.

Nevertheless, as part of the fight against covid19, the Medical Director, Federal Medical Centre Dr. Peteru Inunduh procured Toyota hiace 2020 model ambulance to ease and their response to covid19 patients.

Moreso, the MD is currently Renovating Amenity ward at the main campus of the hospital located at wadata in Makurdi as part of the fight against the pandemic which work is at 90% Completion.

As a professional and expert, the Chief Medical Director, (CMD) of Federal Medical Centre, Makurdi, Dr. Peteru Innuduh before now that cases of the pandemic in Benue State has increased to one hundred and twenty one (121) cautioned against any early reopening of public places shut down on the wake of outbreak of Coronavirus, named as COVID-19.

He warned that hasty decision by the government to reopen the places could be risky and counterproductive to achieving the desired goal for securing lives of the people. He also acknowledged that the devastating effects of the disease on lives and economies of the world, Benue State inclusive is great but called however for patience members of the public urging government to reopen public places to resume life’s activities need to exercise.

He said, to enable government double the efforts and eliminate COVID-19, the general public must be patient as required and observe all established rules, cooperate with the authorities to reverse the ugly trend. On account of this position, the CMD expressed concern why some state governments breached the protocol established by the federal government on patronizing markets, churches and mosques in the country.

The Chief Medical Director expressed worry further that the consequence of the breach has potential for destroying gains already made on war against the pandemic because, those who have the virus but go about unknowingly could get the disease multiplied! On this point, he made historical analysis of the past outbreaks of viral diseases which had devastating effects on the world and cited countries including the Spanish authorities who underestimated the problem and threw open hastily public gates and caused sufferings double by the infections!

Innuduh expressed dissatisfaction on the current agitation by Benue people that government should lift the ban on public gatherings and said, the situation could make transmission of the disease out of proportion the administration must resist the temptation which would lead to repeat of the mistake Spanish authorities and other governments made in the past.
As member of the state action committee on COVID-19, the CMD said, he appreciated efforts of both federal and state authorities for ensuring adequate management of the disease, but called for more interventions with establishment of a testing center in Makurdi to fast track treatment of patients.
Before the out break of the world pandemic, Inunduh was Head bent on taking FMC to world standard. He started with training and Retraining of over three hundred (300) staff of FMC for optimal performance and at the same time established a Benue Bio- medical journals to improve on research and training, as well acquired C.T scan and is running un- interrupted.

The MD Purchased Endoscopical equipments and commenced full Dialysis unit at the hospital. I as well built massive structures at the Theatre unit of the hospital which make it one of the best in the country.

Purchase and installation of 500 KV Generator to effectively improve on the power supply was also done by me, Nutrition and dental unit has been completed and a modern mortuary has been built and is operational at the FMC Permanent site Apir under reign.

Time may not permit me to state all my achievements but worth knowing also are; Massive rehabilitation of Medical Equipments and purchasing of new once, engagement of over 50 Medical consultants in the hospital. Moreso, I successfully carried out a total knee replacement ,and many other projects are on going in the hospital under my leadership. Even equipment of FMC Laboratory which is rated one of the highest in the country with over two thousand (2000) specimens among many others are my stewardship.

The hospital under his management continued to train and retrain her staff as well lobby for more funds to effectively take the hospital to a world best standard in 2020. I will also expand her scope of operations within the state.

FMC under the watch of Inunduh would have achieved more if not because of challenges such as Lack of adequate funds that will enable us to set standard that will save more lives which is the primary aim. Patients are being referred here on daily basis by Benue State University Teaching Hospital Makurdi and many other hospitals for better treatment, we at times also refer them to other hospitals due to lack of some necessary equipment. If we have enough funds, we will make all equipments available to avoid referring patients to other hospitals who at times die on the way based on the delay.