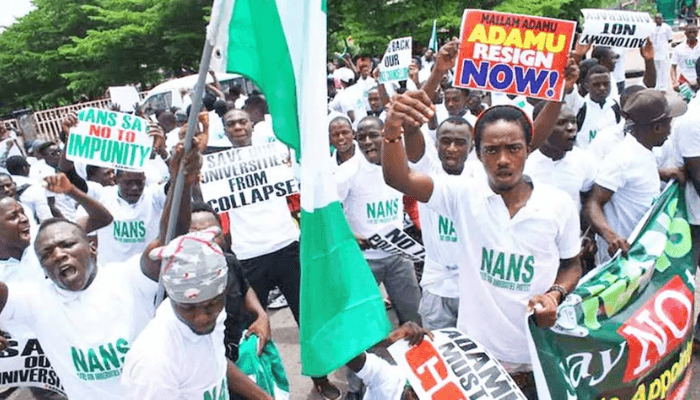 The National Association of Nigerian Students (NANS) is set to storm the Apapa Port barely 24 hours after blocking the International Airport road in a demonstration against the lingering Academic Staff Union of Universities (ASUU) strike.

Adegboye Olatunji, the southwest coordinator for NANS disclosed this to newsmen when he said that the students have plans to take their protest to the sea port in Apapa in protest of the prolonged ASUU strike.

“We will be moving to Apapa seaports if the federal government refuses to do the needful. Students are tired of staying at home,” he said.

Recall the Nigerian students on Monday, September 19, 2022 took their protest to the Murtala Muhammed International Airport in Lagos State and the domestic wing of the airport which left many travelers stranded, and forced several airline operators to reschedule their flights as the roads to the terminals were blocked by the angry students.

The southwest president of NANS in his speech explained that the move to lay siege on government facility is aimed at pushing the federal government to restrategise and bring an end to the lingering ASUU strike.

Earlier on, the students had blocked the Lagos – Ibadan Expressway venting their anger on motorists and commuters on one of the busiest interstate highways in the country over the failure of the federal government to resolve the impasse between it and ASUU which has kept the public universities under lock and keys for more than seven months.

Meanwhile, leaders of the Federal House of Representatives met with ASUU on Tuesday, September 20 in order to resolve the impasse and the students made to return to classrooms.

ASUU has been on strike since February 14, wasting students’ academic session, yet there seem to be no signs of ending the strike except President Muhammadu Buhari is willing to reconsider his decisions and address the demands of the striking lecturers.