As insecurity worsens in Lagos, these are practical ways to protect yourself

The rising spate of violent crimes including armed robberies and kidnapping amidst the seeming helplessness of the state government calls for people to accept responsibility for their own safety.

We analysed dozens of victim accounts shared on social media to distill practical ways you can protect yourself.

The EndSARs protests in October last year did a number on the psyche of the average Nigerian policeman. It forcefully brought him their dysfunction while exposing their vulnerability. Those who are not still seething about it are showing a total apathy for the security of lives and property of fellow Nigerians.

This is in addition to the perennial poor remuneration and working conditions of the police, the absurd structure where a commissioner of Lagos, often doesn’t speak the predominant language of the state he presides and where the governor has no control over the police formation in his state.

So the presence of police stations in any location in the state does little to assuage the threat of insecurity.

Read Also: Why Lagos needs to do more on roads infrastructure

Analysis shows that these are some of the hottest spots in Lagos currently with Surulere being the worst affected.

Right now, it doesn’t matter whether you are walking or driving, you are at risks on the streets of Lagos but it is worse if you are walking, alone and at night.

Most robberies and muggings reported in Lagos occur at night and the victims are often people returning home from work or from their businesses. Cut out visits to friends or other social activities at night if you are not driving or taking taxi. Mid day robberies are frequent too.

Be wary in traffic

Traffic congestion remains the biggest shame of a supposedly mega city, now it is a fertile ground for crime. If you are in a bus, keep phones and wallets inside a bag. Resist the urge to sleep.

If you are driving, keep your phones and wallet away and lock your bag inside the car boot. Roll up your car windows and lock the doors. Keep some cash on you. In the event that you encounter them, It may be the difference between life and death. Money and phones can be recovered. Your attackers have nothing to lose.

Do not quickly get out of your car if another car bumps into yours, study the environment and possibly ignore it. It could be a ploy to lure you out so you can be robbed. Do not be unfortunate.

If you are unsure about a route, take a taxi.

You can leave work early or late at night to avoid getting caught in rush-hour traffic.

Be mindful of broken traffic lights and people loitering around street corners.

Be wary of your surroundings when waiting for public transport. It is always better to board a bus at a park and if its late, it is safer to board a taxi. 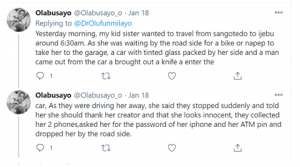 Avoid jogging during early hours of the morning

Take steps to protect yourself, if possible 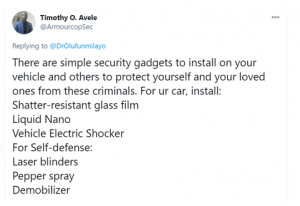 Keep your bank accounts safe – your bank will not help you

Many people now no longer enable USSD codes for money transfer on their phones or ATM cards for their major bank accounts. It may be not wise to keep bank apps on a phone that can easily be stolen. 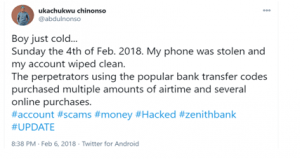 Enable a two-step verification process to access your bank information as well as a consider enabling SIM lock on your phone.

Save your phone’s International Mobile Equipment Identity (IMEI) number in your email.

Lastly, be mindful of making phone calls at a bus stop or on a busy street as many have reported having their phones snatched even during the day.

Fertility treatments to try when you need help conceiving

Lagos has ‘enough’ COVID vaccines but turnout is low – Mustafa