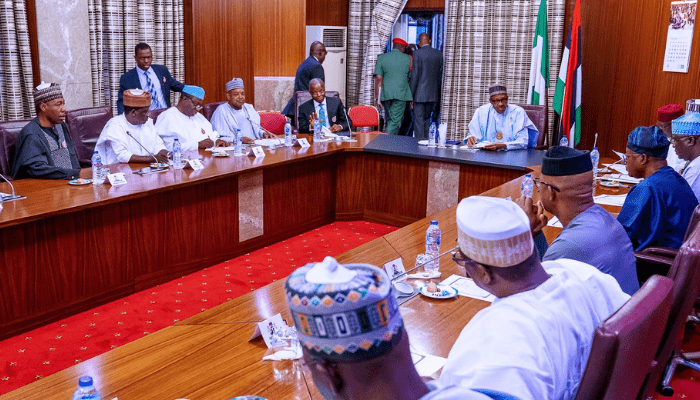 The All Progressives Congress (APC) Governors and the National Working Committee (NWC) are in a crucial meeting to fine tune the list of the party’s Presidential Campaign Council (PCC) and the plan to kick-off its campaign for the 2023 general election.

Others are governors Sani Bello of Niger state, Rotimi Akeredolu of Ondo state, Umar-Usman Kadafur, the deputy governor of Borno state while Adams Oshiomhole and Hadiza Bala, deputy directors-general of the APC presidential Campaign Council are attending the meeting.

James Faleke, secretary of the APC presidential campaign council two weeks ago released a 422-member council which has President Muhamadu
Buhari as chairman, Bola Tinubu, the presidential candidate and Abdullahi Adamu, the national chairman of the party as deputy chairmen while Simon Lalong, the governor of Plateau state is the director-general.

But Abdullahi Adamu, the APC National Chairman Adamu had in a leaked letter to Tinubu said, the NWC received with astonishment and regret, the press release by the council in which a purported list of appointees was announced, which effectively served as the approved roster of participants in the Party’s Presidential Campaign Council.

This was just as the Campaign Council had postponed indefinitely, the kick-off of its campaign activities earlier fixed for last Wednesday.

Lalong, the director-general of the APC Presidential Campaign Council in a statement he personally signed said, the adjustment of the timetable and schedule of activities is to accommodate growing interests showing by various political tendencies in being party of the campaign council.

It is against this backdrop that the APC Governors under the auspices of the Progressive Governors Forum, most of who are members of the Presidential Campaign Council are meeting with the NWC.

Speaking before the meeting went into close door, Lalong who spoke on behalf of the PGF chairman and governor of Kebbi state, Atiku Bagudu said the meeting was for a proper briefing of the forum and the campaign council with the NWC.

On his part, Adamu said the meeting was aimed at synergising with the governors who are the field commanders of the party in their various states for the party’s victory in the 2023 general election.

The APC national chairman said: “Essentially we want to interact with our governors who are the custodians of the faith of APC in their various states that they are previlige by God to lead at this point in time of Nigeria’s democratic dispensation.

“We can not make meaningful progress in the affairs of these states, particularly in an election year that is approaching. We can not plan without the buy-in of our governors so that we can stand together, believing that we share same aspirations.

“We will plan together to see how best we can deliver the interest of the party and ensure that victory is ours in 2023 general election that is by the corner. That is the essence of this meeting.”