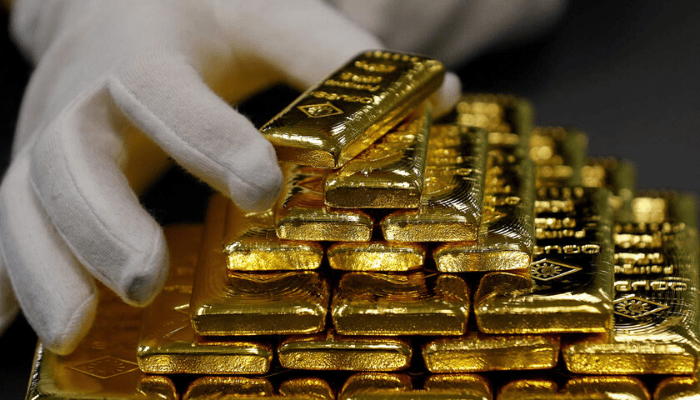 Gold’s role as a haven or a hedge amid uncertainties was further tested Monday as the price of the bullion continued its descent after its worst week in four decades.

Investors are selling down gold to generate liquidity and to offset losses in other markets, an analyst at Germany-based Heraeus told Bloomberg.
“In some cases, investors also sell their gold holdings in order to keep the value of the precious metal constant in their overall portfolio. Due to the lower value of the equity share, gold would otherwise take up a larger share in terms of value,” the analyst said.

The bullion has fallen from as high as $1680 per ounce since Monday, when the oil price crashed by the most since 1991, to as low as $1453 in intra-day trade Monday.

Gold is usually seen as a safe store of value during periods of uncertainty.
The precious metal gained 18.9 percent in 2019, which was characterized by geopolitical uncertainties and the US-China trade war, to record its performance in nine years.

At the start of 2020, the crisis in the Middle East stoked price of gold near a seven-year high as news of escalating conflict between the United States and Iran fuelled investors demand for havens.

But the outbreak of the Coronavirus has proven to defy market rules sending gold to a loss of 8.6 percent last week, the biggest since 1983.
The Coronavirus blues also hit the cryptocurrency market last week, cutting the price of bellwether Bitcoin by at least $2,000.

Bitcoin, once-suggested a haven now trades at its weakest levels since the start of 2019 even though halving of the crypto is only a few weeks away.

Again defiant, US Stocks on Monday failed to rally after US Federal Reserve announced a rate cut to almost zero and a stimulus package of $700bn.

If there is any support coming into the [stock] market, there might be a bid [in gold]. But right now, people are running scared, so they’re afraid to step in,” Phil Flynn, a senior market analyst with at Price Futures Group, told Kitco News on Monday.