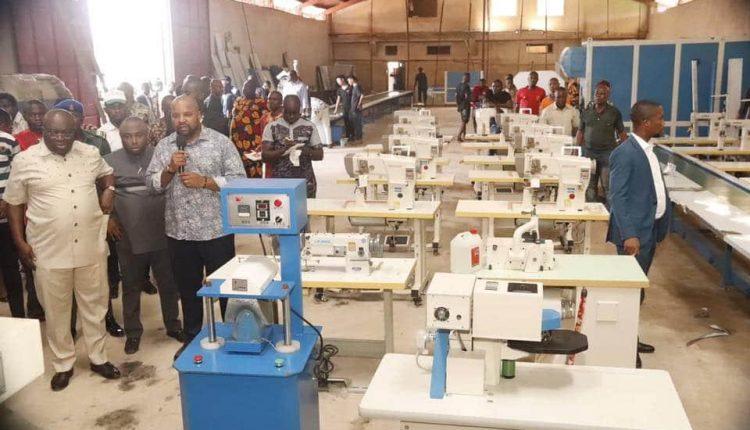 Abia state government has confirmed that the Abia automated shoe factory, located in Aba, the commercial hub of the state, will commence operation in September 2020, after previous attempts failed.

Governor Okezie Ikpeazu made this known Thursday while inaugurating the management board of the factory, at the Banquet Hall of Government House, Umuahia, the state capital.

He charged the board members to operate as a commercial outfit and not like a parastatal of government, to consolidate the position of Aba and Abia State, as a global hub for shoe and other finished leather products.

According to Ikpeazu, “the first-ever Enyimba shoe factory is the signpost of a culmination of efforts to mainstream the Abia in the competitive global shoe market”.

He charged Kito Dominic, managing director of the factory, and other board members to bring to bear their wealth of experience in developing a brand that will compete favourably in the global market.

Members of the Board include Mark Atasie, chairman and Kito Dominic, managing director.

Meanwhile, Osaro Ekonweren, a technical partner, Aba Automated Shoe factory, described the Aba factory as currently having the most updated shoe producing machines in the country.

Ekonweren in an interview, immediately after the inauguration of the Board of the Company, by Governor Ikpeazu, said, “we were amazed and impressed by what we saw on the ground.

“Our group has been into shoe production in Nigeria for over a decade now and I must confess that the machines we saw there when we went on inspection cannot be found anywhere in the country.

“We use machines in our own company, but what we have is nowhere near what is at the Aba Shoe Factory”.

He stated that at present, the factory has an installed capacity for the production of 5,000 pairs of shoes every day, which translates to about 2-million pairs of shoes annually, with facilities for expansion and assured that they plan to actually expand this capacity within the next one year.

He applauded the foresight of Governor Ikpeazu and confirmed that the factory will change the face of shoe production in Nigeria.

He explained that his organisation was selected as technical partners for the factory, based on proven and verifiable track record of quality automated shoe production, spanning over 10-years.

He stated further that they make shoes for companies like PEP of South Africa and several others, assuring that the products from the Aba factory, would be well received, by the markets.

According to him, products from this factory will not just be for the local market here but will be sold across West Africa and beyond.

He assured that the factory will be run as a professional and commercial outfit with clear opportunities for value addition and job creation.

He made it clear that by December this year, shoes from the factory would have gained ground in the local and international markets, noting also that the factory would also produce other leather works, like bags, belts, wallets, among other products.

Chinenye Nwaogu, executive director, operations of the factory, observed that with the new management structure in place that Ikpeazu has sent a clear message that the factory will be run solely on a basis of professionalism, inspired by commercial expediency.

He explained that shoemakers from Aba, who were sent to China, by the Governor for training on the use of machines in shoe production would form the initial technical staff of the factory, while there will be a huge emphasis on training for more operators.

Nwaogu stated that the apparent delay in the start of production at the factory, was because the Governor insisted that a professional organization must be found to run the place and the process took some time, coupled with the COVID-19 pandemic, which shut down the country for about three months.