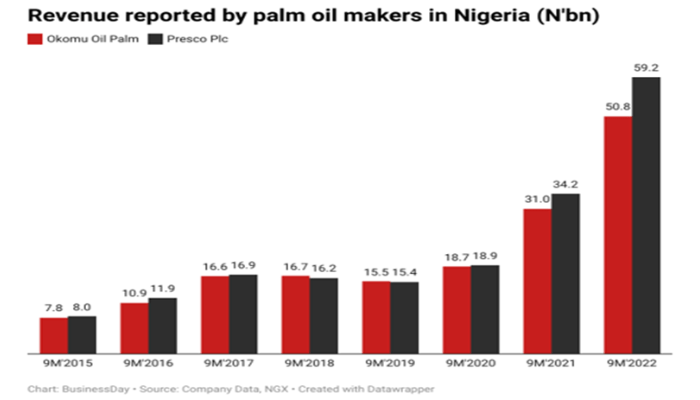 Palm oil prices hit an all-time high in 2022, partly due to export limitations put in place by the Indonesian government and the disruption the Russia-Ukraine war generated in the market for sunflower oil.

Nigeria is the world’s fifth-largest palm oil producer, yet it still imports more vegetable fat than it exports. And the reason for this is that the current local production cannot keep up with domestic demand. Nigeria currently produces 1.4 million metric tons of crude palm oil as against 1.7 million metric tons it consumes.

KayodeEseyin, a research analyst at Lagos-based CardinalStone Partners, said the palm oil industry in Nigeria is unable to meet local demand because of reliance on subsistent or inefficient farming, insecurity, and inadequate access to credit.

Eseyin explained that the Nigerian palm oil industry is very fragmented and dominated by numerous small-scale farmers, who account for 80 percent of local production and most of these farmers are not attuned to modern farming practices, meaning their yields and output are way lower than it could otherwise be.

However, since palm oil is widely used in cooking and manufacturing consumer food products in Nigeria, high prices have stoked consumer inflation and pushed the government to encourage local producers to meet the supply gap.

While most of the palm oil is sourced from small farmers supplying it to the local market, large producers, such as Presco and Okomu, are well placed to benefit from government support, strong international demand, and high prices.

Okomu follows a dual-product strategy, with 85 percent of its revenue derived from palm oil products and 15 percent from rubber products. The plantation area included about 19,000 hectares (ha) of oil palm and about 7,300ha of rubber at end-2021. These effectively make Okomu’s dual-product strategy to provide it with steady growth.

However, analysts from Lagos-based CSL Stockbrokers Limited believe that a global slowdown could impact demand and pricing.

Okomu Oil Palm saw its revenue surge by 63.63 percent in the nine-month (9M’2022) period that ended September 2022 to N50.79 billion from N31.04 billion in the corresponding period of 2021. Further analysis shows that the palm oil company generated N46.29 billion from local sales and N3.89 billion from export sales.

Consequently, profits grew by 55.60 percent to N18.1 billion in the nine-month period that ended September 2022 from N11.6 billion in the same period last year.

Shrinking profit margin on elevated input costs
BusinessDay analysis of the nine-month financial results of the palm oil manufacturers showed that their profit margins, the amount by which revenue from sales exceeds costs in a business, shrank on rising input costs.

Soaring inflation has led to elevated input costs for these palm oil producers, as the cost of sales reported by them increases year on year. Data from the Central Bank of Nigeria shows that inflation in Nigeria, as of September 2022 rose to 20.77 percent from 20.52 as of August 2022.

Okomu’s cost of sales increased by 356 percent to N14.4 billion in the nine-month period that ended September 2022 from N3.16 billion in the corresponding period of 2021.

According to the movement of its cash and cash equivalents reported in the company’s cash flow statement, the palm oil maker generated N22.78 billion from its key operations during the period.

Further analysis shows that Okomu Oil Palm reported a negative net cash flow from investing activities to the tune of N7.94 billion in 9M’2022, due to property, plant, and equipment acquired during the period totalling N7.58 billion, and pre-cropping expenditure the firm incurred during the period which amounted to N365 million.

According to analysts at CSL Stockbrokers Limited, the company has benefited from recent high palm oil prices. “In our view, the company should be able to meet its long-term debt obligations through regular cash flow. Expansion plans include adding milling capacity and sourcing FFBs from small farmers to enhance its CPO plantation base.” 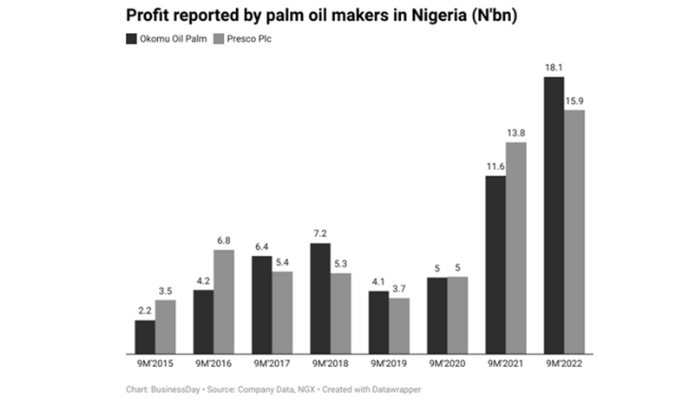 Presco Plc, on the other hand, saw its cash and cash equivalents decline by 25.35 percent to N9.60 billion in the nine-month period that ended September 2022 from N12.86 in the corresponding period of 2021.

The firm’s cash flow from operations improved during the period (9M’2022) amounting to N876 million from negative N6.43 billion reported in 9M’2021.

As part of investing activities, the palm oil producer also acquired property, plant, and equipment worth N7.59 billion during the period.

Presco obtained a loan amounting to N38.79 billion during the nine-month period that ended in September 2022.

“Presco’s leverage more than doubled to 4.7x in 2021 from 2.1x in 2017, increasing the company’s exposure to market risks amid growing inflation and higher benchmark interest rates.

“We believe management needs to raise additional capital through a rights issue or from majority shareholder, SIAT SA, to reduce debt levels,” CSL Stockbrokers Limited, stated in a note to investors.

Market value
The share prices of both companies combined are up 26.5 percent, taking their market capitalisation to N282 billion as of November 11, compared to N223 billion at the beginning of the year.