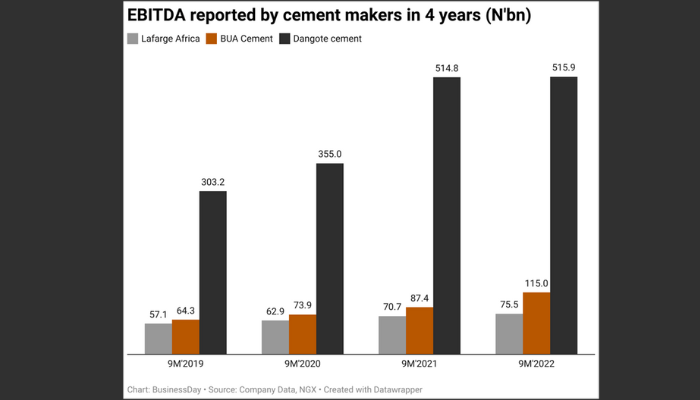 Data gleaned from the NGX showed that aggregate earnings before interest, taxes, depreciation and amortizations (EBITDA) reported by these firms grew marginally by 4.96 percent in the nine-month (9M’2022) period that ended in September 2022 to N706.34 billion from N672.94 billion in the corresponding period of 2021.
As prices increase, volumes decline due to severe gas shortages and heavy rainfall in the third quarter of the year,as a result, the combined revenue reported by the dominant players grew by 19.70 percent to N1.71 trillion in the nine-month period that ended in September 2022 from N1.43 trillion in the corresponding period of 2022.
However, as the cumulative cost of production claimed 47.64 percent of their aggregate revenue, the country’s present high level of inflation, elevated interest rates, and foreign exchange devaluation, the operating expenses, finance costs, and foreign exchange losses reported by the cement manufacturers surged by 43.80 percent, 152.71 percent, and 669.36 percent respectively in the period under review.
Consequently, the aggregate EBITDA margin for the cement makers declined by 580 basis points to 41.31 percent in 9M’2022 from 47.11 percent in 9M’2021. 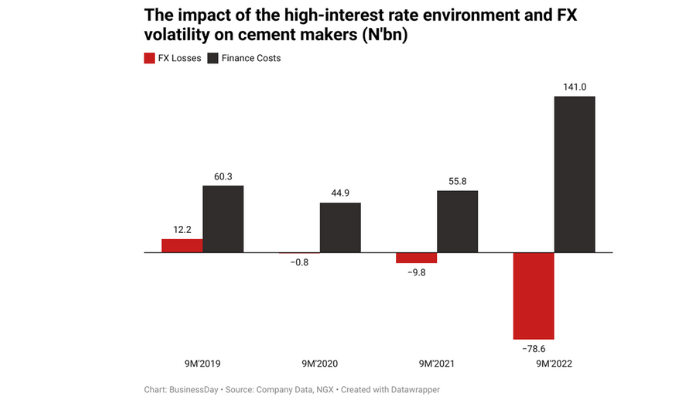 According to management, its national consumer promotion “Bag of Goodies – Season 3” improved market share during the third quarter and cushioned the impact of continued disruptions in energy supply as witnessed in the second quarter (Q2) of 2022, the rising inflation, and the effects of unusually heavy rainfall and flooding on cement demand.
However, its EBITDA margin declined by 654 basis points to 43.82 percent in 9M’2022 from 50.36 percent in 9M’2021, on account of pressure from rising energy costs, and FX losses.

DanCem management also highlighted substantial freight costs in Cameroon, Ghana, and Sierra Leone, causing volatility in the landing cost of cement and clinker. In addition, there was an unusual rise in advertisements and promotions, by 181 percent year on year, owing to the 3rd season of the company’s National Consumer Promotion “Bag of Goodies 3” in efforts to drive consumer engagement.

“Nonetheless, in management’s efforts to combat the menace of ever-rising energy costs, the company renewed its efforts to ramp up the usage of alternative fuels, co-processing 101,553 tonnes of waste representing a 77 percent increase over 9M’2021. Elsewhere, the company is also ramping up investment in Compressed Natural Gas (CNG) to offset AGO usage, having commissioned a power plant at its Okpella plant,” Coronation Research stated.

Furthermore, the group recorded a finance cost of N126.56 billion, up 159.93 percent year on year in 9M’2022. The company also incurred a significant N72.39 billion foreign exchange losses due in part to the FX crisis impacting imported input components as well as depreciation in some Pan-African currencies such as CFA and Ghanaian Cedi, severely eroding the group’s bottom line.

Consequently, the EBITDA margin declined by 300 basis points to 43.78 percent in 9M’2022 from 46.78 percent in 9M’2021. Selling, distribution, and administrative costs increased to N5 billion from N 4.8 billion. Some of the factors accounting for the increase were distribution costs, led by increased volume dispatched, AGO prices, CSR activities, other administrative expenses and depreciation charges.

Read also: Prices of maize, rice, sorghum, others to jump in December 2022 – report

According to the company, energy cost per ton increased by 36.6 percent to N13,978/ton in 9M’2022 from N10,230/ton during the corresponding period ended 9M’2021. This resulted from changes in the market prices of energy products, while selling, distribution, and administration costs per ton increased by 54.4 percent to N4,413/ton in 9 months ended 2022 from N2,859/ton for the 9 months ended 2021; resulting from distribution costs, depreciation charges, CSR expenses, and other administrative expenses.

“While the company tries to mitigate the impact of rising energy costs by consuming locally-sourced Liquefied Natural Gas (LNG) to diversify its energy mix and reduce its reliance on imported coal, Low Pour Fuel Oil (LPFO), and AGO, it would appear there are sustained disruptions in its LNG supply. This has forced the company to remain reliant on diesel and imported coal for production and distribution,” Coronation Research noted.

“Nonetheless, recall that the company signed an agreement with Wartsila OY of Finland to construct a 70-megawatt dual-fuel power plant for its Obu Line 3 project in Edo State and a 48-megawatt power plant for Sokoto Cement Line 3 in its effort to complement its capacity expansion with efficient power supply and improved energy utilization.

“We expect that as the company transitions to gas-powered plants, its energy bill will be lowered in the long term. However, in the short term, these costs are likely to persist as the company remains reliant on existing fuel sources for energy and on diesel for its distribution trucks,” Coronation Research stated.

The company recorded finance costs of N11.44 billion in 9M’2022 from N1.49 billion in 9M’2021, following its policy to discontinue capitalisation of bond and loan interest on its Sokoto line 4 plant.

Like its peers, analysts have attributed the volume decline to the torrential rainfall and the flooding that characterised most of the quarter. In addition, high inflation continued to tighten customers’ wallets.

“Given the company’s strategy to focus on driving capacity utilization via debottlenecking exercises in its Ashaka and Ewekoro plants rather than investing in additional capacity, we expect the firm to ramp up its output towards the end of the year as building projects are rounded off, barring any significant climate-related challenges,” according to Coronation Research analysts.

EBITDA grew marginally by 6.79 percent in the nine-month period of 2022 to N75.51 billion from N70.71 billion in the corresponding period of 2021 as the growth in operating expenses and finance costs weighed down earnings.

The 42.88 percent rise in operating expenses was sufficient to erode the EBITDA margin by 428 basis points. The cause across the industry at large was the cost of selling and distribution, which was up 54 percent year on year.

“While the company remains committed to its sustainability ambitions by utilizing affordable clean energy in its operations and optimizing its green logistics strategy, it would seem there are sustained disruptions in its gas supply.This has forced the company to be more reliant on diesel for distribution than it earlier planned,” analysts at Coronation Research said.

In addition, advertising expenses were up 184 percent, and that contributed to the overall EBITDA erosion. 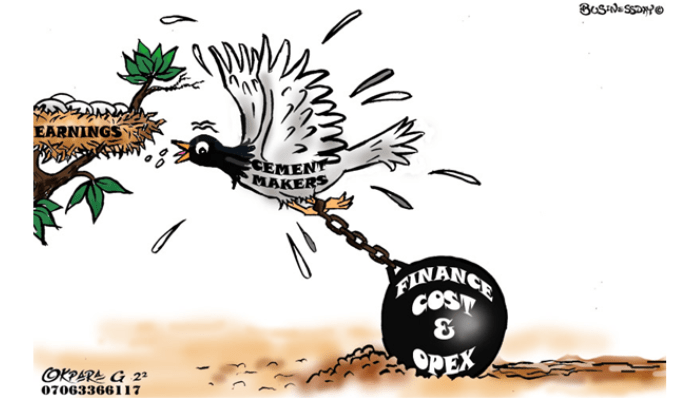