Data shows that the sector’s decline began amidst the oil boom of the 1970s when less funding was given to farmers, producers, and researchers.

However, things are changing.

Nigeria’s biggest palm oil producers have been experiencing high patronage for their products as a ban on importers from accessing foreign exchange for certain products and the devaluation of naira reduced imports and bolstered demand for domestic goods.

The above development allows Palm Oil producers like Okomu Oil Palm Plc and Presco Plc to record strong margins, higher returns on investment, and strong sales, a development that is pushing significant upticks in both top-line and bottom-line figures.

With strong patronage from manufacturers like PZ Cussons Plc, Dangote Industries Ltd. and May & Baker Nigeria Plc, and the ban on CPO imports at the interbank market, the two companies boast of enviable financial strength as evidenced by good working capital conditions and a cash position that makes it easy for them to pay dividends.

The company’s revenue jumped by 97.5 percent to N47.2 billion in the period under review compared to N23.9 billion recorded in 2020.

Although the profit recorded in the year 2021 is the highest in the past four years, it is 25.98 percent lower than N25.4 billion recorded in 2017, the highest as far back on the Nigerian exchange.

The following year, the company recorded a profit after tax of N4.28 billion, 83.15 percent lower than the surge in profit recorded the previous year.

In 2019, the company’s profit after tax further decreased by 11 percent to N3.8 billion, nevertheless, there was a 36.84 increase to N5.2 billion the following year.

The company’s cost of sales climbed by 103.8 per cent from N7.8 billion in the previous year to N15.9 billion. Cost of sales is commonly referred to as cost of goods sold (COGS), it measures the total amount it takes to manufacture, create and sell a product.

Net cash flow from financing activities is a section of a company’s cash flow statement, which shows the net flows of cash that are used to fund the company rose to N14.2 billion compared to N8.1 billion in the previous year. 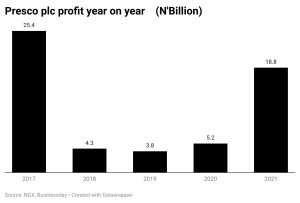 Net cash from investing activities, a segment that explains how much cash has been generated or spent from various investment-related activities in a specific period recorded a year on year loss to N27.1 billion from N6.3 billion in the preceding year.

There was an increase in Presco’s earnings per share on a year on year basis to N1887 from N516.

Okomu oil’s profit grew by 55.5 percent in the last nine years to N14 billion from N9 Billion in 2012. This is the highest profit after tax ever recorded based on the publicly reported financials published on the Nigerian stock exchange.

The profit was hinged on the 60 percent increase in revenue to N37.5 billion in the financial year ended December 2021 from N23.4 billion in the comparable period of 2020.

The revenue was on the back of 85 percent local sales while only 14.9 percent was from exports. Local sales reported N31.9 billion while export sales yielded N5.6 billion.

The company recorded a profit after tax of N8.5 billion in 2018, 6.6 percent higher than N9.1 percent profit recorded the previous year.

Further analysis by BusinessDay shows the company made a profit margin of 37.5 percent in 2021, showing how efficient the company is at managing its cost relative to its revenue.

Okomu oil also recorded a 5234.5 percent spurt in its finance income which gave a boost to its income and consequently, the performance in the period.

Finance income increased to N380 million in 2021 from N7 million in the previous year. This consists of N331 million from exchange gain and other income of N48.9 million.

However, finance cost also increased by 174 percent to N192.8 million from N70 million in the comparable period of 2020 consisting of N113.4 million from exchange cost and N78.9 million from interest on long term loans.

The increase in profit was despite the 51.4 percent increase in the cost of sales to N11.7 billion in the year ended 2021 compared to N7.7 billion incurred in the comparable period of 2020.

The cost of sales in the year ended 2021 consists of N9.8 billion from sales of oil palm and N1.9 billion from the sales of rubber.

There was an increase in the palm oil company’s earnings per share ratio to N14.72 from N8.2.