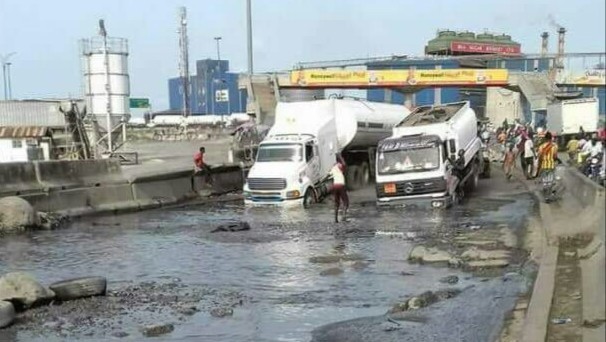 Non-release of funds by the Federal Government has slowed down the completion of the ongoing construction works on the Tin-Can Island Port axis of the Apapa-Oshodi Expressway, according to an investigation by SHIPS & PORTS.

Consequently, a section of the road leading to the Tin-Can Island Port have been under construction for close to a year, resulting in difficulty in cargo evacuation and delayed turnaround time of vessels, thereby affecting port operations generally.

With the slow pace of repair work along the busy highway linking the second busiest seaport in Nigeria, gridlock on the port access road has been compounded following the long queue of container carrying trucks struggling to gain access into the port on a daily basis.

“When you give a job to a contractor and you are paying, he has no reason to delay the job because he wants to make profit as well. But when there is no payment, it will affect the contract. No contractor will want to delay any project when he has funds. I know the contractor is working but lack of funds is a major reason for the delay,” Olukayode Popoola, Federal Controller of Works in Lagos, told SHIPS & PORTS.

Continuing he said: “We will soon open the road. We are trying to complete the Tin-Can section, once we complete it, we will open the road. You know it is concrete pavement that we are using and when you pour concrete, you need to leave it for some days before you can allow it to carry load.”

The construction works carried out by Hitech Construction Company, has completely dis-organised movement of trucks as well as cargo evacuation from Tin-Can Port, and security operatives are now riding on the abnormal situation to squeeze money out of cargo owners and their agents.

It was discovered that security operatives including soldiers and police officers mount road blocks at the Liverpool Junction of the Tin-Can Bridge and very close to the popular Abuja truck park, where civilians were deployed to collect money from truckers before given them access into the port.