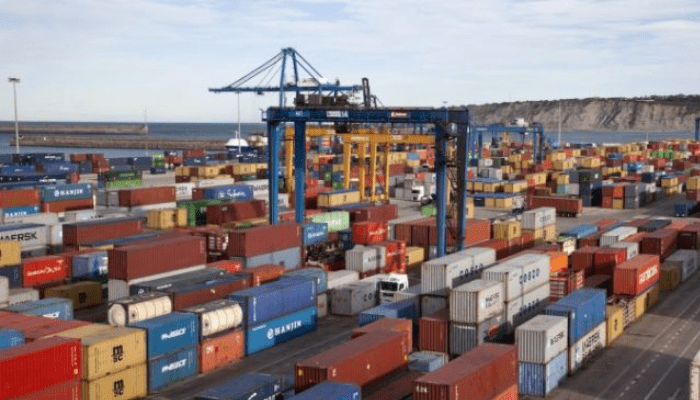 Nigeria’s premier port in Apapa recently lost its status as the leading port in West Africa by capacity and annual throughput, due to chronic congestion and poor-quality services to shippers.

As a result, the Port of Lomé overtook the Lagos Port Complex to become West Africa’s leading port, with a capacity of 1.1 million twenty-foot containers (TEU). This is largely due to modernisation reforms, embarked on to enable Port of Lomé to triple its capacity from 311,500 containers in 2013 to 1.1 million in 2017, according to a West Africa Brief report – tagged ‘Togo’s Port of Lomé becomes regional transit hub.’

Nigeria’s Apapa Port in Lagos, which now handles about 1 million TEU annually, lost 30 percent of its container traffic over five years due to several factors bedevilling its ability to deliver efficient services to cargo owners. These five reasons explain why Nigerian ports remained inefficient over the years:

Nigeria’s major seaports in Lagos do not have deeper draughts to enable them handle bigger vessels with economy of scale. While modern seaports such as the Port of Lomé has a depth of 16.60 meters, and capacity to accommodate third generation ships, Apapa port operates with 13.5 meters draught that can only allow vessels with about 4,000 TEUs of containers to call the port.

Presently, Port of Lome, has become a tranship hub as mother vessels bringing petroleum products into West African ports, now anchor in Lome while smaller vessels are used to lighter their products to the destination ports. This was why port users have been clamouring for the take-off of Lekki Deep Seaport, Nigeria’s first deep seaport.

Cargo inspection by the Nigeria Customs Service (NCS) has been 100 percent manual, due to lack of automated scanning machines and a Single Window platform.

This means that hundreds of thousands of containers that come to the nation’s seaports annually are positioned daily for Customs and other agencies to open and carry out physical inspection, which comes with attendant delays, said Hadiza Bala Usman, managing director of the Nigerian Ports Authority (NPA).

This ends up resulting in delay of cargo clearance and its attendant demurrage, and rent costs, said Lucky Amiwero, national president of National Council of Managing Director of Licensed Customs Agents (NCMDLCA).

In addition, Customs has several units involved in cargo clearing at the port such that documents for clearing a container must pass through their tables before the container would be released. Their involvement causes delay in cargo clearing and additional payment of charges by cargo owners.

The mode of cargo evacuation in Nigerian ports has remained poor and inefficient due to over reliance on one transport mode – road, and analysts believe a port cannot function well, if 90 percent of its import and export cargoes are moved by road.

For this reason, a reasonable percentage of Nigerian cargoes must be off the road by the use of intermodal transport systems in evacuating goods.

Bala Usman on her part insisted that about 30 percent of cargoes that come into Nigeria must be moved through alternative transport systems such as inland waterways using barges and railway.

“If all port locations would have intermodal transport system -rail connection, utilisation of inland waterways and road connection, there would be significant improvement in the congestion around the port corridor,” she said.

According to her, almost all the containers, dry and bulk cargoes that comes into Lagos Ports go through the road, leading to serious congestion as currently experienced.

The Lagos logistics ring (Apapa-Iganmu-Orile-Mile 2-TinCan-Apapa), houses the two Lagos ports, about 27 tank farms, several off-dock terminals, manufacturing and logistics facilities. This logistics ring has capacity to handle only 2,400 trucks and tankers daily, whereas over 7,000 transverse this ring daily.

This causes congestion within the port corridor leading to major cost elements including statutory payments to terminal operators, shipping line, duties and taxes, and accumulated delays, which constitute about 40 percent of the total cost borne at the port.

Presently, terminals within Lagos ports are experiencing close to 90 percent yard occupancy, which shows that there is congestion and longer dwell time for imports. This has also affected waiting time of vessels as ships now spend longer days on Nigerian waters before being able to enter the port to berth.

BusinessDay check shows that due to challenges in accessing the port to lift cleared cargoes, the cost of transporting containers from the ports in Lagos to importers’ warehouses has continued to increase.

For instance, shippers pay close to N1.5 million to transport one unit of 20-foot Equivalent Unit of container from Tin-Can Port to warehouses in Lagos.

Apapa gridlock has also triggered an element of rent-seeking around the port corridor where truckers are mandated to pay money before given access into the port.

The Nigerian territorial waters and the entire Gulf of Guinea region has been tagged as hotspot for piracy and sea robbery attacks following repeated incidents of attacks recorded in recent time within the region.

According to an International Maritime Bureau (IMB) report, Gulf of Guinea, which houses Nigerian waters recorded the highest ever number of crew kidnapped in 2020. Three vessels were hijacked and nine vessels fired upon in 2020 while crew kidnappings were reported in 25 percent of vessel attacks in the Gulf of Guinea – more than any other region in the world.

Due to this, foreign ships coming to Nigeria charge high insurance premium on cargoes. Meanwhile, Nigerian government, the Navy and Nigerian Maritime Administration and Safety Agency (NIMASA) have claimed that they have been investing hundreds of millions of dollars in acquiring platforms for securing and patrolling the country’s territorial waters, but the efforts are yet to yield tangible results.