Here’s How the Oil Crash Is Hitting African Currencies 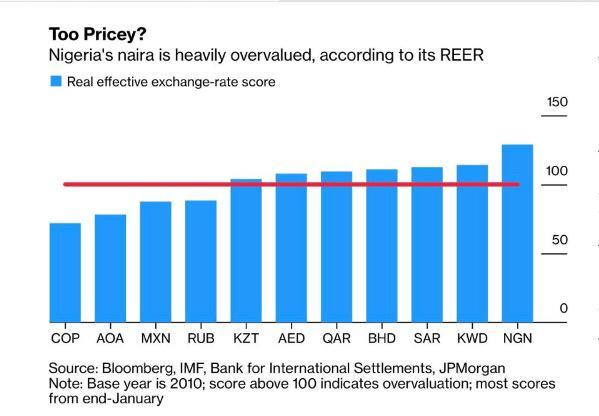 Oil’s plunge has stung currencies in Nigeria and across other African markets, and there’s probably worse to come with oil price tanking.

For oil and gas exporters especially Nigeria the impact has been immediate. Even Gulf states with long-standing pegs to the dollar, such as Saudi Arabia, are coming under increasing pressure.

Crude importers like South Africa and Turkey, whose currencies are close to record lows, haven’t been spared either.

Brent crude prices have crashed almost 55% this year to below $30 a barrel — within touching distance of their low during the last major slump from 2014-16 — as the coronavirus curbs global demand for energy.

The rout accelerated this month when Saudi Arabia triggered a price war after failing to convince Russia to accept coordinated production cuts.

And many expect more pressure will build.

Nigeria, Africa’s biggest oil producer, is reacting to the latest crisis in a similar fashion to that of 2014 — by trying to stop the naira from weakening and tightening capital controls.

The central bank, which has kept the naira in a quasi-peg since mid-2017, said last week it has no plans for a devaluation and threatened to investigate any local currency dealers suggesting otherwise.

Analysts say it might only be a matter of time before it has to give up, however.

Its foreign reserves have fallen by 20% since July to $36.1 billion and the naira is the most overvalued of the major oil currencies, according to the International Monetary Fund’s real effective exchange rate score, REER.

Goldman Sachs Group Inc. says it would take an exchange rate of 600 naira per dollar for Nigeria to generate a healthy current-account surplus with today’s oil prices. That’s almost 40% weaker than the naira’s current rate of 365.

Angola is another country at risk because Like Nigeria, crude oil accounts for almost all its exports. It did ease some earlier pressure, however, by ending the kwanza’s peg two years ago, since when it’s fallen 67% against the dollar.

Still, the country’s foreign-currency shortages triggered by the 2014 crash never completely went away, and last month, the kwanza was trading almost 20% weaker than its official price on the streets of Luanda, the capital.

Such has been the panic in global markets that even the currencies of net oil importers have tanked. South Africa’s rand has fallen 16% this year, with foreign investors pulling more than $4 billion out its stock and local-currency bond markets.

The rand’s risk reversals have soared to around 18-month highs in a signal of more pain to come, with investors concerned about South Africa potentially being downgraded to junk by Moody’s Investors Service. Analysts expect the central bank to cut rates on March 19, which could cause more bond outflows.

NYSC closes down all orientation camps over fear of coronavirus