Some officers of the Nigeria Customs Service (NCS), Nigeria Police, and the Nigerian Army have been at the centre of extortion suffered by some local farmers to an estimated N1.33 billion, facilitated through what has now been established to be a fake document by the agency whose identity has been used to scam helpless farmers for up to five months.

“The supposed receipt used as a cover for the extortion has nothing to do with NAQS,” read a statement sent to BusinessDay by Chigozie Nwodo, head, media, communication and strategies unit, Nigeria Agricultural Quarantine Service.

This was part of findings in a probe said to have been launched by the agency, following a two-part investigation published by BusinessDay this month, on the extortion of local farmers after the border closure in August 2019.

Vincent Isegbe, director-general of NAQS “flew into Lagos on the next available flight,” according to the statement, “for an-on-the spot assessment of the situation at Imeko, Iwoye-Ketu, Ilara, Idofa and other rural communities in Imeko-Afon Local Government Area of Ogun State where the predators are said to (sic) based.”

According to NAQS, an unscheduled visit in the course of its investigations indicated “some criminal elements were at work”. It also said its team found no evidence on the ground on the alleged involvement of any NAQS officer in the extortion.

“Rather, the delegation discovered that a loose group of miscreants had created a means to make farmers run the gauntlet and pay illegal tolls,” states NAQS.

The findings of this probe by the agency, however, threw up more questions than answers. This reporter had sighted the NAQS document used to extort farmers, and the said document was requested before vehicles conveying agricultural produce could pass through checkpoints manned by Customs, Police, Army, Immigration, and even NAQS officers.

While NAQS says in its statement that “a loose group of miscreants had created a means to make farmers run the gauntlet and pay illegal tolls,” this reporter saw Customs officers, Police officers, Soldiers, Immigration officers, and NAQS personnel, at the checkpoints, and not ‘random miscreants’.

For those conveying tomatoes with a bus, N25,000 was paid to get this ordinary looking document, while N50,000 was paid to convey pineapples. In one community called Ilara, the collection on behalf of security agencies was coordinated by a man called ‘Baba Akere,’ who sources say was a notorious smuggler. In another, the investigation identified the traditional ruler as coordinating the extortion. 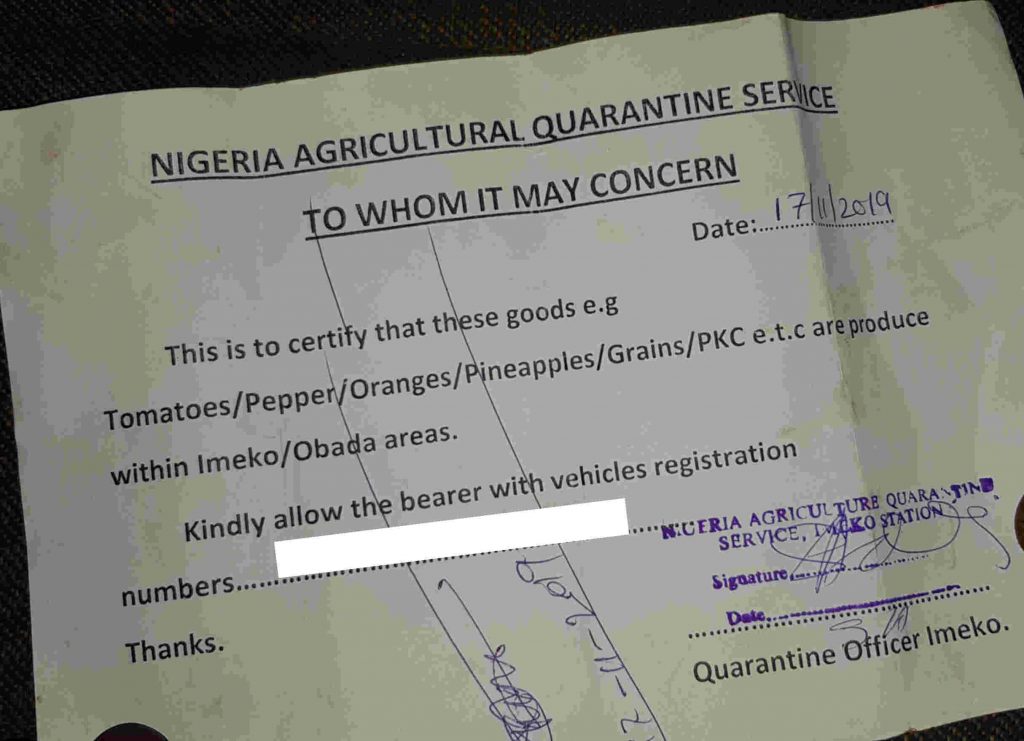 After the document is sighted at checkpoints by security agencies, bribes of up to N2,000 were still requested, details of which were published in the BusinessDay investigation.

The ordinary-looking document was a pass of sort, printed as though it originated from NAQS and was part of a bigger racket that had seen traders and villagers in just one local government area of Ogun State contributing up to N668 million ($1.85m) in extortion within 100 days of the border closure. In 200 days, the figure could have doubled to N1.3 billion ($3.7m).

To the exploited villagers, this was a “government-issued document,” and was now only a thorn in their flesh because of the border closure.

“If there is any forgery of a document, then the agency involved should come out and do its work, and bring a document that is genuine,” said Abdullahi Maiwada, public relations officer, Nigeria Customs Service, Ogun I Command, when told about NAQS’ response to BusinessDay’s investigation.

According to Maiwada, having discovered a document has been forged in its name, and is being used to extort farmers, NAQS should in fact, be at the forefront of bringing those culpable to justice.

However, in the statement sent to BusinessDay, NAQS said it was calling “on the Nigerian Police to hunt down the hoodlums perpetrating this crime and bring them to book.” This begs the question, what are the identities of those NAQS uncovered in its investigation, which the agency wants the police to go after.

Not only did NAQS say the document is a fake, but further claims there can be no original for it to produce, saying, “Its mandate covers only agro-commodities coming in or going out of Nigeria”. Not only is it a fake, but never should have been required for conveying goods produced within Nigeria by Nigerian farmers and on Nigerian soil.

In the end, as contained in the investigation earlier published, from Imeko, this reporter followed a van of allegedly smuggled tomatoes to Abeokuta, which successfully found its way to the Mile 12 Market in Lagos, after passing dozens of checkpoints. N75,900 was spent between Ilara and Abeokuta on bribes, including the now fake quarantine document, yet, genuine local farmers continue to struggle with extortion. Made in Nigeria or produced in Benin Republic (and brought in illegally), the investigation found that getting goods to major cities was a function of how much a person was willing to pay.

“The Command as a responsive and responsible formation will not sweep such weighty allegations under the carpet,” said Maiwada in response to findings of extortion by Customs officers during the investigation. “We will look into your report through proper investigative mechanisms,” he said.

With unexpected hike in CRR, what happens to equities rally?

Where is Nigeria on Covid-19 cure?