You need to active Javascript on your
LEAD STORY,Technology OPay,PalmPay

Investment activities of investors from China and Visa are mostly responsible for 75 percent of total funding technology firms in Nigeria attracted in 2019, according to data from Maxime Bayen of GreenTec Capital.

The data which tracks investment of $1 million and more in startups operating within Africa showed that 77 firms received a cumulative $1.1 billion from 83 deals involving 168 different investors. 35 percent of the funding went to financial technology (Fintech) firms which continued their dominance of the funding activities on the continent.

Fintech startups based in Nigeria received $439 million of the total funding. OPay, Interswitch, and PalmGroup were the most outstanding firms accounting for 93 percent of the funding and close to 50 percent of the entire funding that went to all African startups across sectors in 2019. 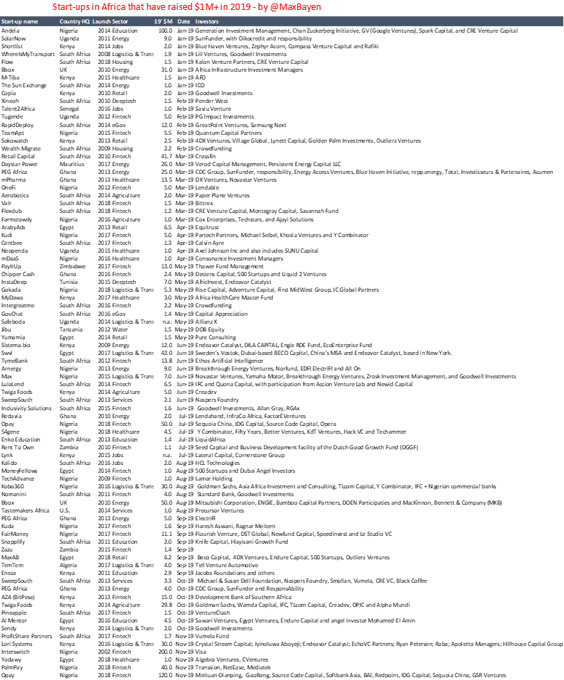 OPay a startup founded by Opera made a bold statement in July 2019 when it said it has received funding by a group of Chinese investors, including Sequoia China, IDG Capital, and Source Code Capital. Apart from being the largest seed funding of any startup operating from Nigeria, it was also the first time Chinese investors were taking significant equity in a startup based in the country.

Interswitch, a payment processing company with Nigerian founders, confirmed in November that it has reached unicorn (a privately held startup company valued at over $1 billion) status after Visa acquired a minority equity stake (21%) in the firm.

Visa was also to partner with PalmPay, a Chinese brand owned by Transsion Holdings which also announced the funding of $40 billion in November. The investment had participation from Chinese organisations such as Transsion’s Tecno, NetEase, and MediaTek.

Barely two days after PalmPay’s announcement, OPay came back with a massive $170 million Series B round from both existing and new investors such as Meituan-Dianping, GaoRong, Source Code Capital, Softbank Asia, BAI, Redpoint, IDG Capital, Sequoia China, and GSR Ventures.

Although there is barely one month to the end of 2019, some experts have said more announcements may still be heard before December 31, 2019. For one, Alibaba founder Jack Ma appears to be stepping up his interest in the African market with the commencement of his African Netpreneur Prize. Nigerian health tech firm, LifeBank was one of the winners of the maiden edition. Ma’s company Alibaba is said to have grand ambitions that cut across eCommerce, payment, and remittance sectors in Africa as part of measures to curtail the growing influence of Amazon.

What to know about 5G spectrum licence

How to spot a valuation art