Recently, there have been uproars on and off social media about Ike Ekweremadu, former deputy senate president and his wife, Beatrice, who were arrested by the United Kingdom Police over alleged child trafficking and conspiracy to harvest an organ of a child.

The United States National Organ and Transplant Act of 1984 lists human organ as the human kidney, liver, heart, lung, pancreas, bone marrow, cornea, eye, bone and skin or any subpart thereof and any other human organ or any subpart thereof, including that derived from a fetus. A report by the United Nations Office on Drugs and Crime (UNODC) stated that children in extremely low-income families are particularly vulnerable to organ transplants, including in countries in West Africa, making up one of every three victims worldwide

According to the United Network for Organ Sharing, organ trafficking is defined as the purchase of a transplanted organ abroad while bypassing laws, rules or processes of any or all countries involved. 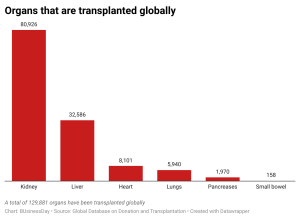 According to the World Health Organisation (WHO), organ trade is the buying and selling of organs outside of national medical systems and for profit. Global Financial Integrity (GFI) estimates that 10 percent of all organ transplants including lungs, heart and liver, are done via trafficked organs.

However, the most prominent organs that are traded illicitly are the kidneys, with WHO estimating that 10,000 kidneys are traded on the black market worldwide annually, or more than one every hour.

In Nigeria, the most trafficked organ is the kidney. From the year 2015 to 2020, a total of 651 kidneys were transplanted illegally from the country, Global Database on Donation and Transplantation reported.

It is estimated that the illegal organ trade conservatively generates approximately $840 million to $1.7 billion annually, according to GFI.

In 2020, the Global Database on Donation and Transplantation said 129,681 organs were transplanted annually. From the total sum, 36,125 were harvested from deceased donors and 15 transplants were done per hour.

Most countries forbid the sale and purchase of organs except Iran. The middle eastern country is the only place in the world where citizens are allowed to buy and sell their organs legally.

According to the Congressional Research Service, “organ trafficking may be facilitated by corrupt officials or criminal groups and may include brokers or other middlemen who connect individuals providing the organ with prospective recipients, negotiate the price, and identify medical facilities where the transplant can occur”.

Unfortunately, even with the estimated flow of funds crossing $1 billion annually, it is difficult for both the law enforcement agents and anti-money laundering professionals to detect related financial activity, according to a report by the Association of Certified Anti-Money Laundering Specialists (ACAMS).