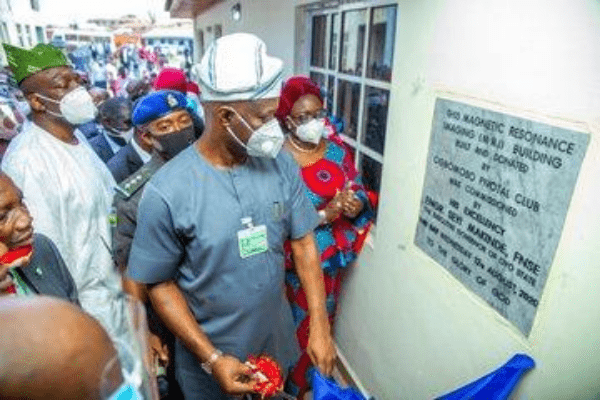 In approving the increased funding, the governor stated that the teaching hospital would be in a position to continuously pay the new minimum wage, offset the 2016 and 2017 arrears of salaries, and enlist the 177 re-engaged workers on the wage list.

Governor Makinde, who disclosed the approvals while on a working tour of the LAUTECH Teaching Hospital, Ogbomoso, where he commissioned a number of projects, stated that the remaining 46 other disengaged workers of the medical institution, who were yet to be cleared by the civil service system, would be screened on Monday.

A statement by the Chief Press Secretary to Governor Seyi Makinde, Taiwo Adisa, further indicated that the governor assured the three workers’ unions in the institution at a meeting that his administration would ensure that LAUTECH Teaching Hospital, takes a good share of the medical tourism industry in Nigeria.

He stated that his administration remained committed to fixing the health care sector in the state, adding that by doing so, the Internally Generated Revenue (IGR) would increase.

Governor Makinde used the occasion to inspect the ongoing upgrade of the isolation centre located within the premises of the teaching hospital, stating that Oyo State is opened to interventions in the health sector through a Public-Private Partnership (PPP) approach.

He maintained that he has asked that the oxygen plant at LAUTECH should be completed through the PPP approach, adding that the task would come on stream shortly.

He said: “I have granted approval for the payment of 2014 corrected CONMESS. Also, approval has been granted for the payment of COVID-19 hazard allowance to all health workers in Oyo State, with effect from March when the first index case was reported in the state. So, LAUTECH Teaching Hospital will not be left out.

“Also, about the 177 staff that were recalled and yet to be paid, I asked the Commissioner for Health why they were not paid and I was told it was due to the subvention. I have given approval for the subvention to be increased, which should take care of payment of the minimum wage to everybody; an additional monthly fund for the payment of 2016 and 2017 arrears, as well as payment of 177 staff that were recently re-engaged effective from the end of this month. So, by the end of this month, all of these payments will occur.”

He added: “Health care delivery system for the state is one of the major pillars of this administration. In the budget, we actually increased the amount allocated to the sector. Some of these challenges were from the past but the government is a continuum.

“As an administration, we have decided to take ownership of all the problems that we have inherited and we want to solve them as much as possible. That is why, when you see them abusing me that I am completing the projects started by other people, it does not matter. What we are trying to do is to extract value for Oyo state’s money that has been spent before. So, when they abuse me again, I am not bothered;  but I will keep completing all the laudable projects irrespective of who started the projects.

“I have also given approval for the implementation of a pilot study on semi-autonomy for selected secondary health care facilities. In another month, we will start the process of putting together the 2021 budget. We had challenges and never knew there would be COVID-19 pandemic. It has slowed things down a little bit for us and your frontline soldiers in the fight against the virus know all the challenges they are faced with. And you all know this virus will not go away anytime soon. We must all learn how to live with it in a manner that does not increase the risk. Our lives will not stop because of the virus. With your dedication and support, we will all fight it to a standstill.”

Governor Makinde stated that as part of his commitment to the development of health workers, the state has already made a provision for the Residency Training Act and placement of doctors that have completed their residency training, whom he said, will be placed on consultant level, in the 2021 budget.

“I know that there is an ongoing recruitment exercise of new medical staff by Oyo State Hospital Management Board. We believe that exercise is open. It should be credible and you don’t need to have a godfather to be employed. I know they are moving towards the physical interviews. I have asked them that those who have been missed out and have real justification should also be considered,” he said.

The governor solicited for the patience of the health workers in the institution, urging them to continue to be dedicated to their jobs and the state while promising that his administration will not renege on its commitment to them and the people of the state.

While speaking on the N100 billion prosperity bond being proposed by the state government, Makinde said: “They are saying Seyi Makinde wants to take N100billion bond. Some of the things we said we will do with the bond are to fix health facilities, and LAUTECH will benefit from such a bond. And how are we going to pay back?  Well, a lot of our people are going all over the world on medical tourism. My own father passed on in India. If I have confidence in the healthcare delivery system in Nigeria, I won’t take him to India.

“So, if LAUTECH would take a share of the medical tourism industry in Nigeria, then, the IGR will increase, subvention will come down and we can use part of that money to keep paying back those loans. It is very simple.”

Earlier in his remarks, the Chief Medical Director of LAUTECH Teaching Hospital, Prof. Oladimeji George Opadijo, said the teaching hospital had a virology building that needed to be developed in order to take care of viral studies, diagnosis and clinical intervention of viral outbreaks of any sort.