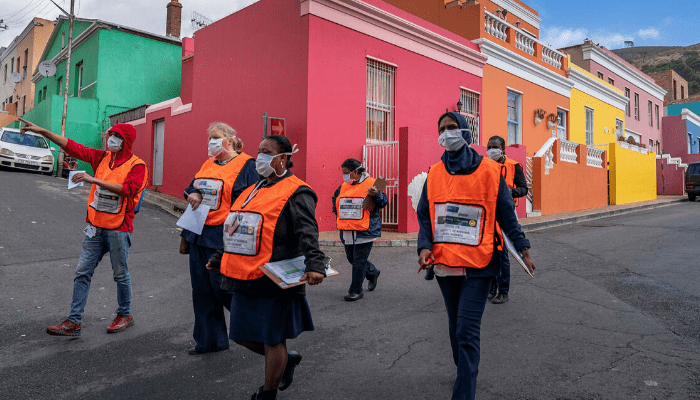 The coronavirus pandemic will plunge sub-Saharan Africa into its first recession in 25 years as global trade contracts in the commodities on which many of its economies rely, the World Bank has warned.

Growth in the region is forecast to fall from 2.4 per cent in 2019 to between minus 2.1 per cent and minus 5.1 per cent, far below expected population growth of 2.7 per cent.

The decline will be driven by severe downturns in Nigeria, Angola and South Africa — the region’s largest economies — and among other commodity producers and has the potential to spark a severe food security crisis, the bank said in a report published on Thursday.

“The Covid-19 pandemic is testing the limits of societies and economies across the world, and African countries are likely to be hit particularly hard,” said Hafez Ghanem, World Bank vice-president for Africa, in a statement accompanying the report.

The report predicts that the pandemic will cost the region between $37bn and $79bn in output losses this year, with decreases in foreign financing flows, remittances, tourism, commodity prices, FDI and international aid.

It also forecasts a “sharp decline” in output growth among the region’s key trading partners, particularly China and Europe.

Sub-Saharan Africa is the region least affected by the pandemic, with just over 11,000 confirmed cases and nearly 600 deaths. But the Africa Centres for Disease Control has said that the continent’s trajectory is tracking Europe’s.

Many countries across the region have implemented social distancing measures, closed borders and imposed lockdowns. But with the majority of Africans working in the informal sector and many living hand-to-mouth, economists have warned that the socio-economic impact could be far worse than in other parts of the world.

An African Union report obtained by Reuters last week estimated that roughly 20m jobs in the region were at risk.

“The size of the contraction that the [World Bank] is predicting is alarming,” said Yvonne Mhango, sub-Saharan Africa economist for Renaissance Capital. “The collapse in commodity prices is a factor, but over and above that is a decline in production from key trading partners which implies a sharp drop in demand for raw materials from [sub-Saharan Africa].”

Growth could fall by up to 7 percentage points in oil-exporting countries, while metals exporters could experience an 8 percentage point drop compared with a situation in which there was no pandemic, the report said. Growth would slow in less resource-dependent economies but remain positive, it predicted.

Goldman Sachs also forecast a recession for the region in a note this week and estimated that African governments collectively would see a $75bn funding gap. The World Bank, IMF and African Development Bank have announced billions of dollars in emergency credit facilities to African countries in recent weeks and called for bilateral debt relief.

Given how hard industrialised economies have been hit by the pandemic, it’s “no surprise that sub-Saharan Africa is projected to be hit by a massive recession”, said Kingsley Moghalu, former deputy governor of Nigeria’s central bank.

“The big lesson from the Covid crisis is that we should be better positioned and prepared for unforeseen global events such as global health pandemics and economic recessions by investing in healthcare and diversifying economies.”