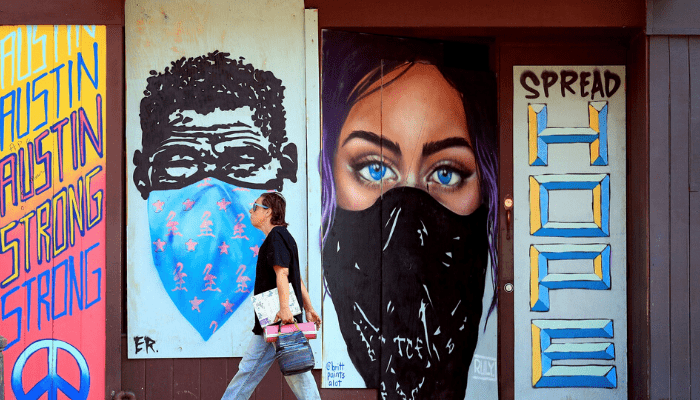 Another 2.4m Americans applied for unemployment benefits last week, bringing the total number of first-time applications to 38.6m since the pandemic hit the world’s largest economy nine weeks ago.

The data released on Thursday confirmed the enduring damage to the US labour market inflicted by lockdowns, raising pressure on the Federal Reserve, Congress and the Trump administration to take further monetary and fiscal action as the crisis drags on.

“Although it’s too soon to know now, the concern is that unemployment will continue to be an issue even after we begin the recovery,” said Jason Reed, a professor of finance at the University of Notre Dame’s college of business. “If the federal and state governments are not aggressive enough in combating unemployment, we might see permanently higher levels of unemployment and a second jobless recovery.”’

The figures showed the level of weekly jobless applications dropping by 249,000 — marking the seventh consecutive fall.
But the overall tally remained high at 2.4m, in line with economists’ forecasts, heralding another increase in the total unemployment rate in May from the 14.7 per cent rate recorded in April.

Ernie Tedeschi, an economist at Evercore ISI, wrote on Twitter that the latest jobless claims figures were historically consistent with a real-time unemployment rate of 18.5 per cent.

In the latest week, California recorded the highest number of first-time applications with 246,115, followed by New York and Florida with 226,521 and 223,927 claims, respectively, according to preliminary state-level estimates that have not been seasonally adjusted.

The previous week’s figures had been revised lower to 2.69m, down from 2.98m initially, reflecting a change to Connecticut’s data after officials reported an error had overstated the number of people seeking jobless benefits.

The number of people actually receiving benefits rose to 25.07m for the week ending May 9, and those receiving unemployment insurance comprised 17.2 per cent of all workers that week.

The report comes as hopes rise that lay-offs will peak soon as economies begin to gradually reopen and some furloughed employees resume work, while others find new jobs. However, concerns remain that job cuts which were expected to be temporary will become permanent.

The pace at which rehiring outpaces job losses “will be the best barometer of how fast and how completely the economy is recovering”, said Joshua Shapiro, economist at MFR.

“We expect that an initial burst as major population areas reopen will be followed by a longer period where improvement is slower and more uneven, with it taking many quarters for the economy to claw its way back to pre-pandemic levels,” he said.
Other data released on Thursday suggest that the crisis is far from over, even while business conditions start to improve as the reopening process begins.

The preliminary IHS Markit composite purchasing managers’ index for the US, a survey of economic performance in manufacturing and services sectors, improved in May to 36.4, from 27 the previous month. A reading below 50 indicates a deterioration in conditions — although May’s figure suggests the decline was less severe than it was in April.

However, the report showed a substantial fall in output as manufacturers and service providers “indicated marked declines in client demand”. And a survey of manufacturing in the US mid-Atlantic region also improved, rising 13 points to minus 43.1 this month, but remained at historically weak levels, according to the Philadelphia Federal Reserve. A reading above zero indicates an expansion in activity, while below zero signals a contraction.

Meanwhile, sales of previously owned homes in the US tumbled 17.8 per cent month on month in April during the key spring selling season, although it was less dire than the 18.9 per cent economists surveyed by Reuters had forecast. However, with a rebound in mortgage applications, economists expect home sales to pick up again.

Federal Reserve chair Jay Powell has warned that a full US economic recovery may take until the end of next year and could depend on the development of a Covid-19 vaccine.

The minutes of the Federal Reserve’s April monetary policy meeting showed officials believed the pandemic, which has already killed more than 87,000 people in America, would “continue to weigh heavily on economic activity, employment and inflation in the near term and would pose considerable risks to the economic outlook over the medium term”.

The US Congress has already approved almost $3tn of economic relief measures to support struggling businesses and households, but pressure has been building for additional relief.

Last week the Democrat-controlled House of Representatives, led by Nancy Pelosi, approved $3tn of new stimulus spending. But the Republicans who control the Senate have not yet acted on it, raising doubts about the prospects for more fiscal support from Congress.

The Democratic plan includes an extension of federal jobless benefits worth $600 per week — which are due to expire in July — until early 2021, but Republicans have argued this risks disincentivising the return to work as states reopen their economies