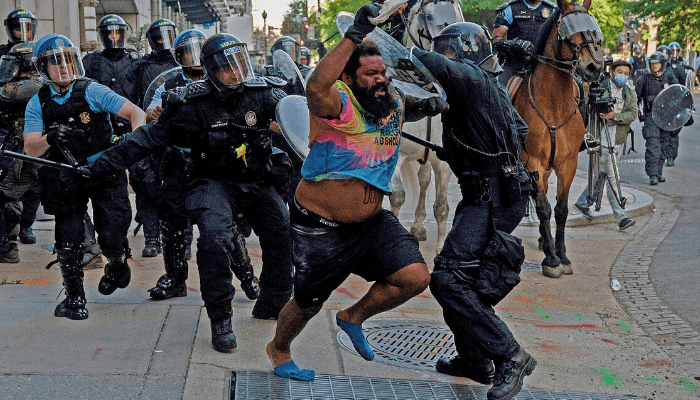 Five police officers were reportedly shot during clashes in several US cities as protesters and looters defied curfews and violence continued in the wake of the killing of George Floyd, a 46-year-old black man, in police custody last week.

Four police officers were shot in St Louis, Missouri, as authorities struggled to regain control of the city’s streets late into Monday evening. The officers, who were being treated for non-life-threatening injuries in hospital, were hit by gunfire as they stood next to a police line during violent disorder, said the chief of police, John Hayden.

People had been throwing rocks and fireworks, and had tried to throw petrol at officers, he added. “As we speak we are trying to get control of the city.”

In Nevada, a police officer was shot near the Las Vegas Strip, the Associated Press reported. There were no details on the officer’s condition. Authorities were also responding to a second separate shooting in the area, the AP said.

Two people were killed in Cicero, a Chicago suburb, according to the AP. Ray Hanania, a municipal official, told the news agency that 60 people in the town had been arrested, but did not give further details on the deaths.

The violence escalated after President Donald Trump on Monday night threatened to send American soldiers on to the streets to quell the worst unrest since the 1960s. As Mr Trump finished speaking, police fired tear gas and rubber bullets at protesters who were demonstrating peacefully in Lafayette Square, a park in front of the White House. Mr Trump then strode across the cleared area to St John’s Episcopal church, where he posed for pictures holding a Bible, in a move critics panned as a publicity stunt.

Mr Trump said on Twitter on Tuesday morning that there had been “no problems” in Washington the previous night. “Many arrests. Great job done by all. Overwhelming force. Domination.”

Meanwhile, Joe Biden, the president’s Democratic opponent as he seeks re-election, was expected to give a speech on Tuesday in Philadelphia. Much of the downtown area in the city, which is the site of his campaign headquarters, had been shut following violent clashes between protesters and police.

“When peaceful protesters are dispersed by the order of the president from the doorstep of the people’s house, the White House — using tear gas and flash grenades — in order to stage a photo op at a noble church, we can be forgiven for believing that the president is more interested in power than in principle, more interested in serving the passions of his base than the needs of the people in his care,” Mr Biden was expected to say, according to prepared remarks released by his campaign.

After the coronavirus emergency and its devastating economic fallout, which has left more than 100,000 Americans dead and 40m out of work, the protests — the most widespread since the civil rights era — have created another crisis for the president just five months before the election. Since Floyd’s death in Minneapolis last week, the president has been criticised for appearing to incite violence against demonstrators.

New York ordered residents home by 11pm on Monday, the first time a curfew had been imposed on the city in 70 years. But about 1,000 protesters remained on the streets past the deadline, with looting taking place in the glitzy midtown district. Another curfew is set to begin at 8pm on Tuesday.

“Protesters were overwhelmingly peaceful today and cops respected their right to speak out,” wrote New York City mayor Bill de Blasio on Twitter. “But some people tonight had nothing to do with the cause and stole and damaged instead. That we won’t allow.”
Elsewhere in the state, two police officers in Buffalo were injured after a car was driven through a police line. Mark Poloncarz, Erie County’s executive, wrote on Twitter that the two officers were “allegedly in stable condition” after the incident.

In Louisville, Kentucky, tear gas was used to disperse several hundred people in the downtown area. A march had been held in the city to demonstrate against the death of barbecue restaurant owner David McAtee, who was shot and killed by police on Monday morning.

The city’s police chief was fired after it emerged that body cameras worn by the officers involved in the incident had been switched off.

In Los Angeles, police moved in to arrest looters as an 8pm curfew passed. A peaceful protest had earlier taken place along Hollywood and Sunset Boulevards.

Michel Moore, the city’s police chief, was forced to retract a comment suggesting that looters had Floyd’s death “on their hands” as much as the white officers accused of killing the unarmed victim last week.

After being prompted for clarification by Eric Garcetti, the city’s mayor, Mr Moore said Floyd’s death was being exploited as a “catalyst for violence”.

The family of Floyd released the results of a private autopsy, which concluded that he died from asphyxia. The findings contradicted the preliminary county report that found no evidence of “traumatic asphyxia or strangulation”.

Derek Chauvin, the white police officer who knelt on Floyd’s neck for eight minutes, is awaiting arraignment on charges of third-degree murder.

Mr Trump has blamed the violence on the “radical left” and urged governors to take more aggressive action. “You have every one of these guys on tape. Why aren’t you prosecuting them?” he said, according to a recording of his call with governors on Monday.
Thousands of National Guard troops have been deployed across more than half the states in the US.

Barack Obama, the former president, said in a blog post that the protests were a “genuine and legitimate frustration over a decades-long failure to reform police practices and the broader criminal justice system” in the US. He said the vast majority of the demonstrators were peaceful and criticised the “small minority of folks” who resorted to violence.