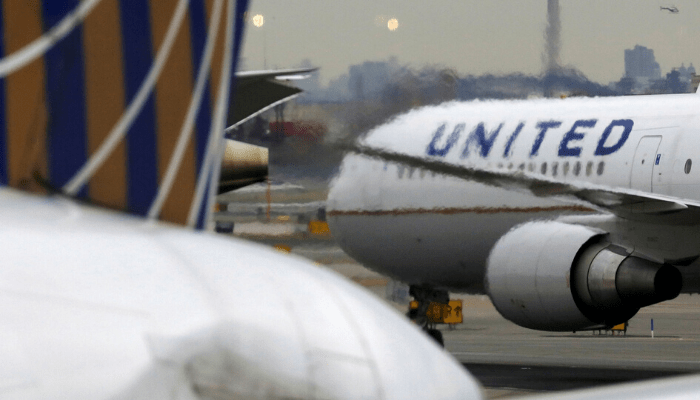 United Airlines abandoned an attempt to raise $2.25bn in the bond market on Friday after three days of trying, having found tepid demand from investors that could have forced it to pay an interest rate of about 10 per cent.

The bonds, backed by a pool of 360 aircraft owned by United, representing 40 per cent of its fleet, were designed to repay a loan the airline secured from a group of banks in early March, when the coronavirus pandemic was taking hold outside China.

United did not give a reason for scrapping the planned offering in a filing with US securities regulators late on Friday, but people familiar with the transaction said the interest rate demanded by investors proved too dear for the company.

“This deal was oversubscribed but at a higher price point,” said a person with direct knowledge of the deal. “The company decided that they needed more time to think about it.”

A separate source familiar with the offering said the airline expected another chance soon to raise liquidity on better terms.

There is plenty of money out there. It just looks like it got too expensive for United, and it wasn’t worth them pursuing it

The failure to secure a deal came at the end of a volatile week for airlines, which began with a big sell-off in their shares following news that the famed stockpicker Warren Buffett had ditched his investments in the sector. The US Treasury secretary Steven Mnuchin also indicated that the federal government might keep its bans on international travellers coming into the US for an extended period.

United had announced on Wednesday that it would raise $2.25bn through a $1bn threeyear bond and a $1.25bn five-year bond.

Investors expressed concerns about the age of the aircraft pledged as collateral, according to people familiar with the discussions. Analysts and investors have raised questions generally about the value of older planes in a world where the airline industry’s international trade group estimates there may be 35 per cent more planes in service than justified by demand.

Bankers, who at first marketed the bonds with an average coupon of 9 per cent, ultimately increased the return to about 10 per cent to get investors on board. A person with direct knowledge of the deal said the higher cost, alongside covenant changes to protect investors, gave United pause.

The airline has been hard hit by a pandemic that has sent passenger revenue plunging to near zero, reporting a pre-tax loss of $2.1bn in the first quarter. It had $5.2bn in cash and short-term investments at the end of March, and $ 23.3bn in debt. Almost $15bn has been wiped from the company’s equity valuation since the start of the year, with its shares falling 71 per cent.

The failed fundraising stands out, given the glut of debt that has been raised in the bond market in recent months. US companies have raised roughly $500bn since the Federal Reserve in late March announced an unprecedented move to buy corporate bonds. Some $95bn was raised in the past week, according to the data provider Refinitiv.

United’s rival Delta Air Lines borrowed $5bn through a bond offering in April in a deal that was secured by routes and airport slots and which paid investors a coupon of 7 per cent. Other indebted groups in hard-hit industries, including Norwegian Cruise Lines and its rival Carnival, have had to offer assets such as cruise ships as security to clinch needed financings.

“There is so much liquidity in the system right now — from the Fed, from the European Central Bank, from the Bank of Japan — and I don’t sense that this is ready to stop by any means,” said Andrew Brenner, head of international fixed income at National Alliance Securities. “There is plenty of money out there. It just looks like it got too expensive for United, and it wasn’t worth them pursuing it.”

United raised more than $1bn in late April selling equity and also took $5bn from the US government’s $50bn airline industry bailout fund, most of which was a grant but 30 per cent of which came in the form of a 10-year loan initially paying taxpayers a 1 per cent interest rate.

The company has said it expects to cut its workforce dramatically after September 30, when constraints tied to the US government aid expire.

The company started the second quarter burning $ 50m in cash a day and has said it hopes to reduce that to $40m by the end of June. It tried to reduce its 15,000 employees’ hours from 40 a week to 30 but backed off after the International Association of Machinists and Aerospace Workers sued on Tuesday.

United has applied for another $4.5bn in secured loans from the federal bailout fund but can wait until later this year before deciding whether to tap them.

Sunak skilfully serves up a boost for consumption