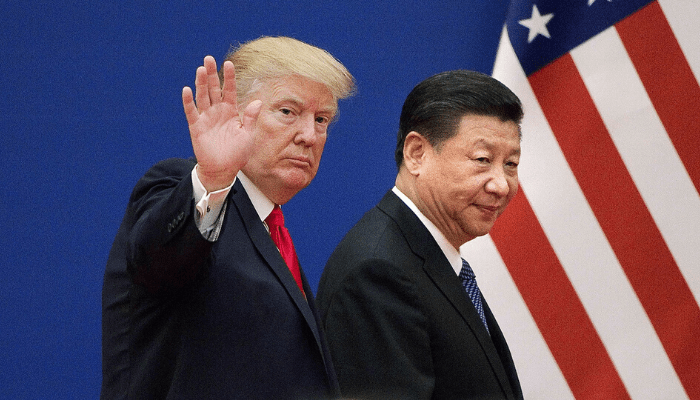 Donald Trump and Xi Jinping spoke by telephone on Friday, signalling a potential thaw in relations between the world’s two most powerful countries after weeks of bitter exchanges over the coronavirus pandemic.

In a tweet, the US president described his first interaction with his Chinese counterpart since the outbreak began three months ago as “very good”.

“China has been through much [and] has developed a strong understanding of the Virus,” Mr Trump added. “We are working closely together. Much respect!”

Chinese state media said that Mr Xi had spoken with Mr Trump “at the invitation of the US side”, and offered to “unreservedly share [China’s] experience in prevention and control efforts, and treatment with the World Health Organization and countries including the US”.

Over recent days, Mr Trump has stopped referring to the coronavirus as “the Chinese virus”, which had angered officials in Beijing and triggered domestic criticism that he was stoking anti-Asian sentiment as the virus spread rapidly across the US.

US officials countered that the designation was fair in light of some Chinese diplomats’ endorsement of unproven conspiracy theories blaming the US military for the outbreak, which began in the central Chinese city of Wuhan in December or November.

However, other senior Trump administration officials were continuing to insist that the virus should be referred to as “the Wuhan coronavirus”.

The war of words threatened to impede any prospects of meaningful co-operation between the US and China as the pandemic continued to spread rapidly around the world. It also coincided with a charm offensive by Beijing heralding its dispatch of medical supplies and teams to European nations struggling to contain the pandemic.

Mr Trump and Mr Xi spoke just hours after the number of officially confirmed cases in the US exceeded those in China. The Chinese foreign ministry also announced late on Thursday that it would ban almost all foreign nationals from entering the country even if they held valid work and residence permits.

While the number of locally transmitted cases in China has dwindled over recent weeks, the government has been alarmed by a spike in so-called imported cases from people arriving in the world’s most populous nation. Most of the carriers, however, have been Chinese nationals.

China’s aviation regulator also said on Thursday that it would restrict all international airlines still operating flights to and from China to just one weekly service, in a move that will make it even more difficult for expatriate Chinese to return home.

Earlier on Thursday, Mr Trump and Mr Xi had both participated in an emergency videoconference of G20 leaders to discuss the pandemic.

The US has recorded 85,505 coronavirus cases with 1,288 deaths, compared with 81,340 and 3,292 respectively in China. But China’s official case numbers, unlike most other countries’, do not include “asymptomatic” carriers who do not exhibit any symptoms. If such cases were included, it is estimated that China’s official count could be as much as 50 per cent higher.

While Friday’s phone call signalled better relations between the two countries, more trouble could be in store after Mr Trump signed into law an act obliging Washington to help bolster international support for Taiwan.

The Taiwan Allies International Protection and Enhancement Initiative (TAIPEI) Act requires the Trump administration to reward third countries that have strengthened or upgraded relations with Taiwan. The law also calls on Washington to advocate for Taiwan’s participation in international organisations.

Analysts see the new law as an open rebuke of China’s intensifying efforts to isolate Taiwan internationally. Beijing claims Taiwan as part of its territory and threatens to invade if Taipei formalises its de facto independence or resists unification indefinitely.

Naira falls to N410 per dollar at black market