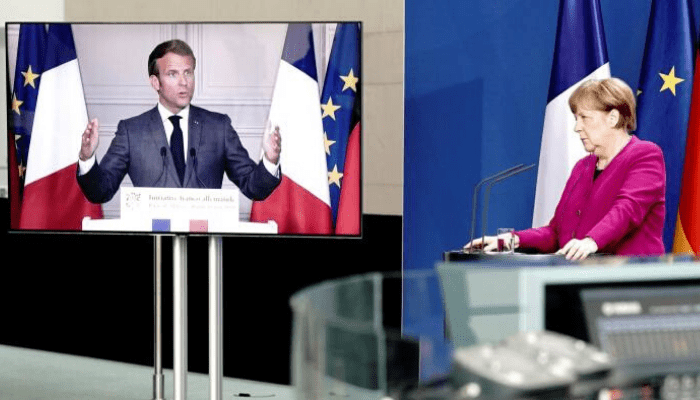 When German chancellor Angela Merkel announced one of the biggest U-turns of her career this week, the declaration was both emphatic and unexpected.

On Monday, she and French president Emmanuel Macron unveiled a proposal for a €500bn EU “recovery fund” to help the European economy back on its feet after the havoc wrought by the coronavirus pandemic.

Politicians and analysts say the plan, under which the European Commission would borrow money to support the budgets of stricken member states, could mark a turning point in the history of the EU.

The two leaders and commission president Ursula von der Leyen will now have their work cut out convincing the so-called Frugal Four — Austria, Denmark, the Netherlands and Sweden — to support the proposal. But the previously faltering Franco-German partnership, revived by the need to avert an economic depression, could be a powerful persuader.

According to one senior German official, the “moment of reckoning” for Berlin had come almost two weeks earlier, on May 5, when Germany’s constitutional court in Karlsruhe had cast doubt on the legality of the European Central Bank’s bond-buying programme.
For years, the EU has relied on the ECB to do the heavy lifting in a crisis. “The idea was, member states didn’t need to do any fiscal stuff because the ECB would always save the day,” the official said. “The bank was also a useful scapegoat to have around to blame for anything that went wrong.”

The court ruling underscored the need for budgetary as well as monetary support for vulnerable EU members.

Nevertheless, Ms Merkel’s championing of the proposed recovery fund with Mr Macron seemed to come out of the blue. Even her closest allies were stunned. Berlin had always opposed the idea that money from such a fund would be distributed in the form of non-refundable grants rather than loans. For Germany, that smacked too much of fiscal transfers from richer to poorer EU states — taboo in Berlin.

The French president, too, learned only shortly before their joint videoconference on Monday that Ms Merkel was prepared to have the entire €500bn distributed as grants, according to officials in three European capitals.

“The whole thing being in grants is pretty good,” said one French official. “I’m not sure we were fully expecting that.” Another said Mr Macron, who had held two previous, unpublicised video calls to negotiate with Ms Merkel in the days before the surprise announcement, learned of her change of heart only “a short time before” the declaration.

Aside from the judgment of the court in Karlsruhe, the other factor that influenced Ms Merkel’s change of position was the economic impact of the pandemic itself.

Within weeks of Covid-19 striking the EU, Mr Macron was joining Italy and Spain in calling for an ambitious pan-European economic recovery plan. On March 25, nine governments published a joint letter calling for the issuance of joint European debt. “We want to use this crisis to go a step further in terms of solidarity,” one French official said.

Three weeks later, Mr Macron warned in an FT interview that the eurozone and the whole “European idea” could collapse if the EU failed to set up a fund that could issue common debt and finance member states according to their needs rather than the size of their economies.

By then, Olaf Scholz and Bruno Le Maire, the German and French finance ministers, had already overcome Dutch objections to persuade their eurozone colleagues to agree to an initial €540bn package of crisis-fighting measures, including deployment of loans from the European Stability Mechanism with few strings attached.

However, Mr Macron, and eventually Ms Merkel, realised that more was needed. On Monday, Ms Merkel said the economic impact of the virus was so great that it could “endanger the European Union’s cohesion”.

“The big concern is that the economic crisis will destroy the European single market and even threaten the future of the EU,” said one senior adviser to Ms Merkel’s CDU, adding that the chancellor needed a “grand gesture” to prove she had not abandoned southern European nations hit hard by the virus.

On April 23, an EU summit agreed in principle on a plan to launch a recovery fund. In the weeks that followed, Ms von der Leyen was engaged in intensive discussions about how it would be structured. Last weekend, she spoke to more than 20 capitals on the phone seeking to smooth the way to a deal.

But it was the court decision in Karlsruhe that tipped the balance for Ms Merkel, according to officials in both Berlin and Paris.
Fear was spreading in the German government that the constitutional court could go even further, and issue a similar challenge to the ECB’s recently launched €750bn pandemic emergency purchase programme (PEPP), the centrepiece of its crisis-fighting strategy.
The stars were aligned for a shift of policy. Since March, the French had accepted the idea of housing the emergency fund in the EU’s regular budget, with all the associated oversight, rather than establishing it as a separate entity. They also agreed it should be for a limited time and focused purely on recovery from the coronavirus crisis.

At home, Ms Merkel’s hand was strengthened by her soaring popularity during the pandemic. In nearly 15 years at the summit of German politics, she has rarely been so widely respected.

Finally, on Monday, the announcement was made. The EU, said Ms Merkel, was facing the “toughest challenge in its history”. In times of struggle you had to “stick up for an idea”, and in this case it was the “idea of Europe”, she said. “The national state alone has no future.” It was the sort of thing Mr Macron says. But on Monday it was Ms Merkel who said it.