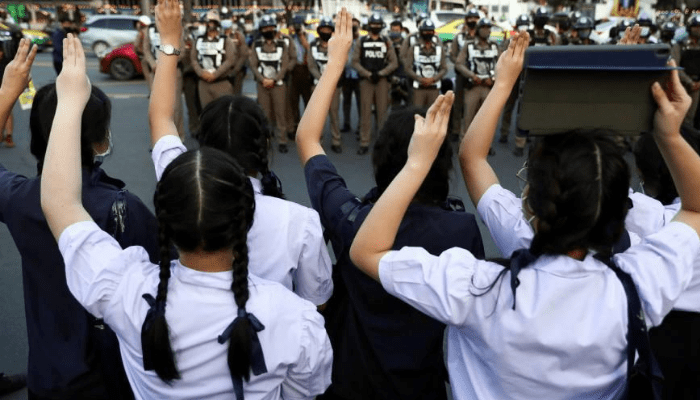 As darkness fell on August 10, a 21-yearold student stood in front of a crowd of up to 10,000 pro-democracy protesters at Thammasat University’s Rangsit campus outside Bangkok and — say some observers — changed Thailand forever.

It was not the biggest rally the Thai capital has ever seen, even in the latest bout of protests. But Panusaya Sithijirawattanakul provided the most electrifying moment so far in a growing movement that is taking on something which the Thai people rarely challenge publicly: the monarchy.

Wearing a red blouse — a colour Thais associate with leftist and populist dissent — the third-year sociology student read out a list of 10 demands to reform the institution at the pinnacle of Thailand’s political order, which normally sits above criticism of any kind.

The demands, inspired by the writings of Paris-based exile and ex-thammasat lecturer Somsak Jeamteerasakul, would have been familiar to hardcore democracy activists but were now getting an unprecedented public airing. They included cutting the budget allocated to the king and the Palace, ending education that “excessively and onesidedly” glorifies the monarchy, and investigating the murders of dissidents who criticised the institution. The 10th demand was: “The king must not endorse any further coups.”

Ms Panusaya’s public reading of the demands was an extraordinary moment in a country whose lèse majesté law carries a prison term of up to 15 years for insulting King Maha Vajiralongkorn or his immediate family, and where exiles who spoke out have been abducted or killed.

The government of Prayuth Chan-ocha, the prime minister who came to power in a military coup in 2014, filed a court order demanding social media groups take down posts from the rally. Conventional Thai media agonised over how to cover what was undeniably big news.

Progressive Thais are now watching events with a mixture of hope and fear similar to those following the stand-off between young protesters and government authorities in Hong Kong.

Past protest movements in Thailand have been repressed violently by authorities, and many Thais fear this one will be too. But whatever happens, the Thammasat students appear to have shifted the parameters of debate for good. Thai and foreign media and the international community are scrambling to keep up. At stake is the future of Thai democracy and south-east Asia’s second-largest economy, which has been blown off course badly by past political unrest.

‘ Take the issue up later’

The near-daily protests began in July, embracing three core demands: the resignation of the Prayuth government, a rewriting of Thailand’s constitution and an end to the harassment of dissidents. But over the past month the protests have strayed into forbidden territory, as a faction some Thais call the “Thammasat group” demanded reform of the monarchy, an institution shielded from criticism by both law and tradition in this intensely hierarchical society.

As in Hong Kong or the Black Lives Matters protests in the US, the Thai youths’ confrontational style and demands are viewed as extreme by many of their elders, including some who share their progressive views.

“I believe that most of the kids support this,” Netiwit Chotiphatphaisal, a veteran student activist says of the demands for reform of the monarchy. “But many core members believe that this should be raised after they get more people — that they should stick to the three demands and the king issue should be taken up later, or that they should take a more moderate tone.”

Thailand’s government has hinted it may engage with the protesters on elements of their three core demands, such as constitutional reform. But they have flatly rejected calls for any reform of the monarchy.

“Don’t touch the monarchy issue, as it’s respected by all the Thai people,” Mr Prayuth recently warned. General Apirat Kongsompong, the powerful military chief, more bluntly compared the protesters to Covid-19 in a recent speech, that many Thais interpreted as suggesting they should be snuffed out. “Covid is a curable disease, but hating the nation, hating one’s own country, that is a disease that’s not curable,” he said.

Thailand’s security forces have a history of staging coups and murdering protesters to protect the royalist status quo. A bloodbath at Thammasat’s Bangkok campus killed scores of people protesting against a royalist military government in October 1976. For now, authorities are treading cautiously, arresting or issuing warrants against several people, including Ms Panusaya, on sedition charges or violating the emergency decree in place to fight coronavirus.

Her friends have voiced concern for her safety, and are standing by to film her arrest on a Facebook livestream when the time comes.

Ms Panusaya says she was drawn to politics at Thammasat, joining the “Dome Revolution”, a student union political party that has produced several other leaders of the current protests. In discussion with friends, she concluded “the monarchy was the root of every trouble in Thailand” — an inflammatory view for most Thais.

“I have prepared mentally if I have to go to jail, or if I have to die — I’m prepared for anything,” she told the FT in an interview near her dormitory in Rangsit, which she has been sticking to after being stalked by plainclothes police. “I know I’m doing the right thing to say the monarchy should reform, and people should agree with me.”

‘ They are too brave’ Thailand has seen protests in the past, most notably those involving “Red Shirt” supporters of populist Prime Minister Thaksin Shinawatra, who set up protest camps and battled “Yellow Shirt” royalists in Bangkok a decade ago. But the topic of the monarchy has until now been left out of the fray.

No longer. The protests have a different demographic. Although there is no single leader, the organisers are young activists, with women and people from the

LGBT+ community playing highprofile roles and advancing their issues too. Many are children of Yellow Shirt conservatives who run Thailand’s government and institutions, making their demands — and any potential official crackdown — more sensitive. But raised on the anonymity and frank exchanges of social media, they are showing a fearlessness that surprises and worries their elders.

“I think they are too brave,” says Viengrat Nethipo, assistant professor of political science at Chulalongkorn University in Bangkok, which has also seen recent protests. “But they feel able to shout in front of the puuyai [grown-ups], the respected people, the people who have power.”

The protesters’ visual emblem is the three-fingered salute raised by the teenage warriors of The Hunger Games, the dystopian young adult franchise. More recently children have taken to raising the salute during flagraising ceremonies at schools.

While the protests have their roots in philosophical and generational grievances against the older men who run Thailand, economic and other factors are also at play. The economy was underperforming relative to regional rivals before Covid-19, and is now contracting at its fastest rate since the Asian financial crisis in 1997- 98. The health system has managed to contain coronavirus, but the pandemic has sealed off the economy to the inbound tourists on whom it heavily relies.

The protests began in smaller form in late 2019. Future Forward, an opposition party calling for a removal of the military from politics and a shake-up of the kingdom’s gerontocracy, had galvanised young voters before last year’s general election. It became the third largest party in parliament even though the vote was held under a constitution engineered to keep the military in charge of government.

Future Forward supported a large “Run Against Dictatorship” organised by young activists, as well as smaller “flash mob” events in Bangkok that illustrated how to use social media to stay ahead of the authorities.

Police and prosecutors began a campaign of harassment against Future Forward, then Thailand’s constitutional court banned it in February, on the eve of Thailand’s coronavirus lockdown, angering its young supporters.

“The vote that they cast for the first time was stolen from them in an unjust, unfair way,” says Sunai Phasuk, a researcher with Human Rights Watch. “They saw flaws in the constitution as the reason this happened.”

‘ Too angry to be afraid’ During lockdown, elite students were cooped up at home and living entirely online. Some of their discontent coalesced around the Milk Tea Alliance. Named after Taiwan’s signature drink, it is an impromptu grouping of young people in Thailand, Hong Kong and Taiwan who voiced mutual support for activism and criticism of China.

Twitter in particular took off in Thailand, where forbidden topics like the monarchy could be broached in a safe space under once unthinkable hashtags like “#Whydoweneedaking”.

The king has concentrated power and wealth since the death of his father Bhumibol Adulyadej in 2016, amassing control over tens of billions of dollars’ worth of crown property and direct command of two military regiments. The palace is restoring pomp and traditionalism around the monarchy in Thailand, even as the king spends most of his time in Germany. Thai media have tiptoed around these topics. But on social media, users have plunged in to the debate with online news and gossip like that seen on Royalist Marketplace, a hugely popular Facebook page. The Thai authorities forced Facebook to block the page this week, although the US group is challenging the court order.