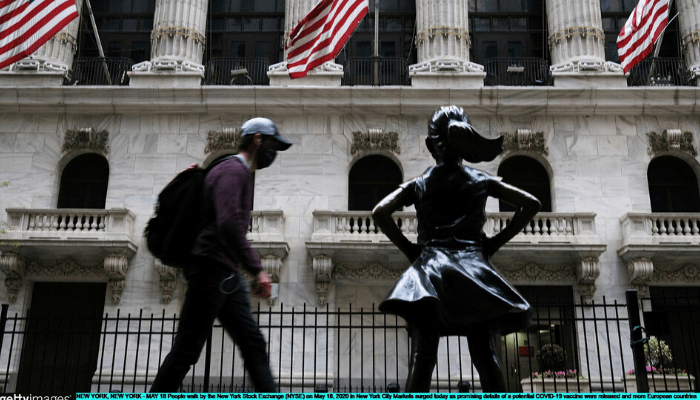 Stock markets and oil prices pushed higher on Wednesday as investors grew more hopeful about the prospect of a global economic recovery from the coronavirus.

The optimism was underlined by continued demand for sovereign debt of some of the world’s biggest economies. The UK sold debt with a negative yield for the first time while the US prepared its first 20-year bond since 1986.

Nasdaq, the benchmark for high-growth stocks, touched its highest point since mid-February, rising as much as 1.7 per cent in early trading. The S&P 500 rose 1.5 per cent to its highest level since early March.

Investors shrugged off concerns raised by medical news website Stat on Tuesday, that called into question the rigour of an early-stage trial of a Covid-19 vaccine. Optimism for the vaccine, manufactured by Moderna, stoked a rally in equities markets around the world but the article raised doubts over the speed at which a vaccine could be developed.

European equities caught the mood, reversing early losses to make strong gains in the last hour of trade. The FTSE 100 in London and regional benchmark Stoxx 600 index both closed up 1.1 per cent.

Crude oil rose on hopes grew that a combination of rising demand and falling supply would boost prices. Brent crude, the international benchmark, was up 1.5 per cent at $35.20 a barrel while West Texas Intermediate, the US marker, rose 0.7 per cent to $32.20 a barrel, its best level since mid-March.

Consultancy Wood Mackenzie estimated that national oil companies would cut exploration budgets by more than a quarter on average in 2020.

Dominic Schnider, an analyst at UBS, said that the “bottoming out process had begun” for commodities.

But he said it would be a slow recovery. “Unlike equities, which are strongly driven by expectations, commodity prices are influenced by actual supply and demand dynamics. On this assessment, nothing has fundamentally changed.”

Investors also continued to draw comfort that long-term debt being issued by governments to support their economies was still in demand. The yield on the UK 10-year gilt fell 0.018 percentage points to below 0.70 per cent.

However after a surge in April, equities markets have struggled to gain ground in May as investors grapple with a series of unknowns — from the prospects for economic recovery to the likelihood of a new wave of infections as countries lift lockdowns. MSCI’s broad index of global stocks is up just 0.3 per cent on the month. The spot price of gold rose as high as $1,750 per troy ounce, close to an all-time high.

Analysts remain cautious over whether the easing of lockdowns will derail the success many governments have had in lowering coronavirus infection rates. The reproduction number remains below one — the key threshold below which the virus recedes — in many big economies, such as the UK, Germany, France, Spain and Italy, according to figures collated by JPMorgan Chase.

The Wall Street bank, however, warned in a note to clients on Wednesday that “at the moment, nowhere in Europe has the resources to do the kind of widespread testing that is needed” to track and trace new coronavirus cases effectively enough to staunch a second wave.

“This suggests that if exit strategies continue to be aimed at preventing a second wave of infection — by keeping R [the reproduction rate] below one — restrictive social distancing measures will need to remain in place for an extended period,” JPMorgan said. “The easing in lockdown measures that we are now seeing risks a second wave of infection.”

Asian stocks were mixed. Japan’s Topix index rose 0.6 per cent on Wednesday, while Australia’s S&P/ASX 200 rose 0.4 per cent. Hong Kong’s Hang Seng rose 0.1 per cent and China’s CSI 300 index of Shanghai- and Shenzhen-listed stocks fell 0.5 per cent.
The rise in Japanese shares came after data showed that core machinery orders — viewed as an indicator of capital spending in the coming months — fell less than analysts expected in April.