Russia cannot afford another 15 years at war with the west 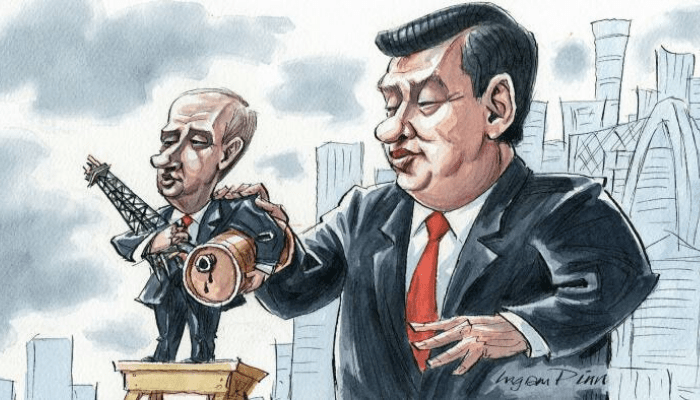 Vladimir Putin is proposing to give himself the option of another 15 years in office. He could spend this time continuing to shake his fist at the west. Alternatively, he could brush away the cobwebs of the cold war and begin to recognise the challenge to Russian power from its friend and ally China.

So far Mr Putin’s foreign policy has been tactical rather than strategic. Its goal has been to keep up appearances. Russia’s president heads a nation in decline, but one unwilling to cede its place at the top table of global affairs. There is nothing unusual about this. British prime ministers clung on to the idea they were one of the “Big Three” even as the empire dissolved around them. At some point, though, the pretence becomes unsustainable.

Mr Putin has built his standing at home on the promise of restoring Russian prestige abroad. Above all, he has craved recognition for Russia as a match for the US. Nothing wounded him so much as former US president Barack Obama’s throwaway jibe that Russia had fallen to the role of a “regional power”. The Kremlin’s answer has been to sacrifice strategic interests to appearances. The unspoken price has been the acceptance of the role of junior partner in Beijing.

The Kremlin this week defied the Covid-19 pandemic to hold its delayed 75th anniversary commemoration of the Soviet Union’s victory over the Nazis in 1945. The parade of the nation’s military might through the streets of Moscow is being followed by a vote over several days on constitutional changes that would allow Mr Putin to remain in the Kremlin until 2036. The referendum outcome, as with all Russian polls, is a foregone conclusion.

Mr Putin’s promised victory, however, will say nothing about the nation’s future trajectory. The Russian leader has spent his first two decades in a noisy struggle against the west. His worldview was shaped by the cold war and the Soviet Union’s supposed humiliation by the west. In this mindset, the US-led Nato alliance remains the enemy, and the Kremlin’s goal is to secure the respect in Washington it commanded before the fall of the Berlin Wall. All the while, the economic and strategic realities have been travelling in the opposite direction.

The Covid-19 pandemic has hit Russia hard. So has the global economic downturn. The fall in the oil price has robbed the regime of economic flexibility and of funds to finance its foreign adventurism. Mr Putin’s revanchism in Ukraine and his opportunistic interventions in Syria and Libya have begun to look unaffordable.
Measured in terms of nominal national income, the World Bank ranks Russia 11th in the world — behind such nations as Italy, Canada and Brazil. Russia’s power now resides largely in its nuclear arsenal and in Mr Putin’s willingness to use its technological capabilities and military forces to disrupt and destabilise perceived rivals.

The Russian president, of course, may be banking on a victory for Donald Trump in this year’s US presidential election. Among the many alarming insights in former national security adviser John Bolton’s account of life in the White House is the president’s deep contempt for European allies. One more heave, Mr Putin may be thinking, and Mr Trump will destroy Nato from within.

Although a second term for Mr Trump would be severely disruptive of the alliance, Mr Putin would be chasing dreams. Whether he enjoys defeat or victory in November, Nato will outlast this president. The question a strategically-minded leader in Moscow should be asking is why Russia continues to view the alliance as such a threat. Mr Putin would do better to look eastward to the ever more assertive foreign policy of Chinese president Xi Jinping

On one level, the present Sino-Russian axis makes perfect sense. Both nations reject the American-designed postwar global order and repudiate the notion of a rules-based system rooted in western values. Both favour a Westphalian order in which the strong carve outs spheres of influence.

For Mr Xi the gains speak for themselves. Moscow offers secure supplies of oil and gas to sustain the growth of the Chinese economy. The relationship provides strategic reassurance as Beijing confronts the US in pursuit of maritime hegemony in the western Pacific. Looking ahead, depopulated swaths of Russian Siberia offer an opportunity for economic expansion. Mr Putin’s forays in Ukraine and the Middle East are a bonus, distracting US attention from Chinese expansionism in east Asia.

The advantages for Russia of such an unequal partnership are not so obvious. Yes, Mr Putin gets a comrade-in-arms for his denunciations of western liberalism but at the expense of watching Beijing’s Belt and Road Initiative undercutting Russian power in central Asia. Mr Xi’s plan to open the Northern Sea route to Europe threatens to undercut Russian interests in the Arctic. An expansive view of China’s influence-building in eastern and central Europe would raise fears of strategic encirclement.

Mr Putin is a creature of the Soviet KGB. It may well be that it is too late for him to escape his own nostalgia. But a leader planning to hold on to power for another 15 years might take the time for a strategic stock-take. The challenges and risks lie to Russia’s east.

Ayala wins over Duterte with rapid response to Covid-19