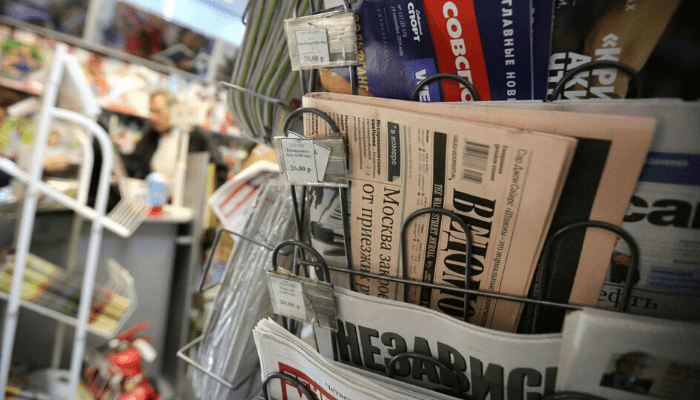 A little-known Russian media executive with close commercial ties to the state has bought leading business newspaper Vedomosti after a deal to sell it to different buyers collapsed in a row over censorship.

Staff at Vedomosti say the eleventh-hour appearance of Ivan Eremin to rescue the sale is unlikely to ease their stand-off with the paper’s new acting editor, whom they claim banned writing on topics that the Kremlin considers taboo.

The clash over Vedomosti, according to its reporters, shows the Kremlin wants to increase its control over what little remains of the nominally independent media. In recent years, several other outlets have been sold to Kremlin-friendly owners and have installed pliant editors, prompting staff to quit en masse.

A consortium led by publisher Demyan Kudryavtsev took over Vedomosti — co-founded and formerly co-owned by the FT and the Wall Street Journal — in 2015 after Russia limited foreign ownership of media to 20 per cent.

Mr Eremin’s purchase “looks like the manifestation of the unnamed figures who are really behind the official buyers of Vedomosti and look at the publication as an instrument of influence, not a business”, the paper wrote in an editorial after the deal was announced on Friday.

“Examples of editorial staff resisting pressure from owners . . . are rare exceptions that prove the rule: a change in ownership means editorial policy will make a sharp turn or a smooth drift in the direction of more loyalty to the authorities and state companies.”

Vedomosti’s reporters have been in open revolt since March against Andrei Shmarov — who was appointed acting editor as part of the failed deal to sell the newspaper — after they said he began censoring articles in favour of the Kremlin and state-run oil company Rosneft.

The row with Mr Shmarov in effect torpedoed the sale to publisher Konstantin Zyatkov and Arbat Capital chairman Alexei Golubovich, according to people involved in the talks: each side accused the other of appointing him, prompting Mr Golubovich to drop out in April.

Vedomosti then teamed up with three other Russian outlets to investigate the consortium that bought the paper in 2015. Vedomosti’s parent company owes about Rbs2bn ($28m) through a complicated structure of debt to the Russian Regional Development Bank, a lender owned by Rosneft, according to the joint report. Rosneft said the company played no role in the sale or Mr Shmarov’s appointment.
Mr Zyatkov said on Friday that he had also decided against buying Vedomosti and had instead brought Mr Eremin into the deal. “Buying the publisher outright would be too risky in current conditions” during the coronavirus pandemic, he said in a statement. “You have to be prepared to risk spending more than the purchasing price.”

Mr Shmarov in April denied being influenced by the Kremlin, saying: “I make all my decisions at my own discretion.” He also said he was not “at war” and hoped to repair his relationship with staff.

Mr Eremin — whose FederalPress agency has won hundreds of advertising tenders with the government and state-run companies, including Rosneft, according to government data — did not say how much he had paid for Vedomosti or whether he had taken on its debt to Rosneft’s bank.

The FT has approached Mr Eremin for further comment.

“[The sale to Mr Ermin] could be a milestone in destroying what remains of the free media. They’ll destroy the business, including the subscriber base,” said a person involved in the talks to sell Vedomosti. “It’ll be hard to restore it, and you can’t do it from abroad, so the screws will be tightened further.

The 4 Pillars of Personal Finance Mastery (1 of 4)