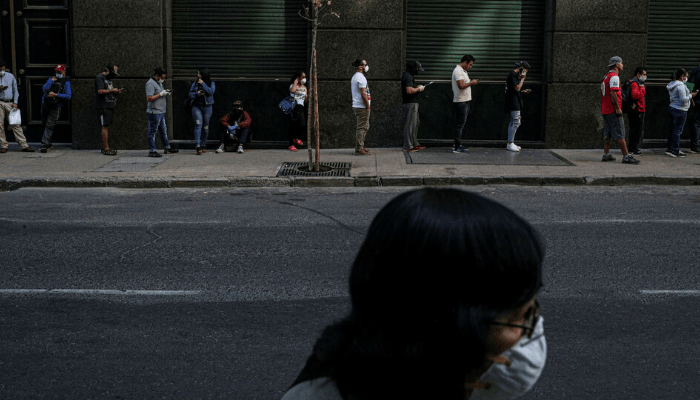 The coronavirus crisis will cut working hours by almost 7 per cent worldwide in the second quarter of 2020, a “catastrophic” effect that is equivalent to the loss of 195m full-time workers, the International Labour Organization said on Tuesday.

The UN agency warned that 1.25bn workers — almost two-fifths of the 3.3bn-strong global workforce — are employed in sectors suffering drastic falls in output, from retail and real estate to manufacturing, accommodation and food services. More than four-fifths of the global workforce live in countries where full or partial lockdown measures are in place.

“Workers and businesses are facing catastrophe, in both developed and developing economies,” said Guy Ryder, ILO director-general. “It will hit the most vulnerable the hardest.”

The scale and speed of job losses across the developed world has taken policymakers by surprise. Almost 10m people in the US filed initial jobless claims in the last two weeks of March, and many economists expect the US unemployment rate to rise rapidly above 10 per cent. A similar scale of job losses has hit Europe, although many workers can access government wage subsidy schemes designed to limit long-term unemployment.

The ILO’s warning came just three weeks after it published analysis suggesting the pandemic would lead to 25m job losses in 2020, more than were lost after the 2008 financial crisis.

Mr Ryder said it now seemed likely that more than 30m jobs were lost in the first quarter alone, and the ILO now expected a much more severe short-term impact, using more timely data from business surveys and Google search trends to illustrate what it called “the dire reality of the current labour market situation”.

It predicted that the number of hours worked globally would decline by 6.7 per cent in the second quarter of 2020 compared with the previous three months, reflecting both lay-offs and other temporary reductions in working time. This would be equivalent to the loss of 195m full-time jobs, based on a 40-hour working week.

The ILO made its estimate by using the historical relationship between working hours and purchasing managers’ surveys of business conditions that are published on a monthly basis in some countries. The ILO assumed that other countries taking the same measures to control the spread of the virus would face a similar hit to the effect in the surveyed countries.

The surveys may not be a reliable guide — they show that an overwhelming proportion of businesses expect conditions to worsen, but say nothing about how severe the downturn might be or how long it is likely to last. However, they are the most timely data available internationally; only a couple of countries publish up-to-date administrative data on claims for benefits and wage subsidies. Official data elsewhere lags behind events on the ground by severaThe sectors most exposed to big falls in output are labour-intensive and employ millions of often low-paid, low-skilled workers who will feel the effects especially badly, the ILO said. They account for the highest proportion of employment in the Americas, Europe and central Asia.

But the ILO also warned that the virus was now spreading to countries where a high proportion of the workforce had no access to social protection; excluding agriculture, more than 70 per cent of workers are in the informal sector in Africa and 90 per cent in India.
The ILO did not make a full-year forecast, as it said that the overall increase in global unemployment during 2020 would depend on the policies countries adopt to boost labour demand once the economy begins to recover. It underlined the need for new measures such as cash payments and transfers of basic goods to support those hardest-hit in countries with high levels of labour market informality.

“We are going to be tested ever more strongly as the pandemic extends its reach into the developing world,” Mr Ryder said.

e argued that while many governments had already “done the right thing” with fiscal and monetary stimulus, there was as yet no full international response to the “evident need for solidarity and support for the developing world”.

The IMF and World Bank’s recent call for bilateral debt relief was “clearly not enough”, he said, adding: “We need to see very large-scale resources made available to those countries that are most vulnerable.”
l months.