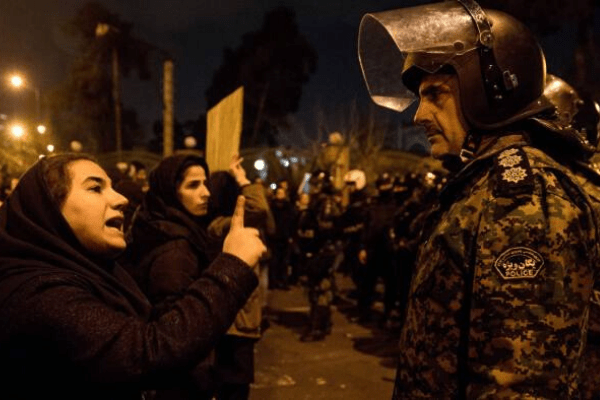 In little over a week, public feeling in Iran has swung from fervent support for the regime in the face of American aggression to anger and distrust after the country’s military leaders lied over the downing of a commercial passenger jet that killed all on board.

After the US assassination of the military commander Qassem Soleimani in neighbouring Iraq on 3 January, millions of Iranians across the country came together to pay tribute to the fallen soldier. The huge funeral turnout amazed political and military leaders, who just two months earlier had faced the most violent anti-government protests since the revolution.

Iranian politicians interpreted the nationalism evoked by Soleimani’s death as a sign of continued public support for their controversial regional and defence policies, despite the debilitating impact of US sanctions.

But then on Saturday Iran admitted the Ukraine International Airlines passenger jet that came down last Wednesday shortly after takeoff from Tehran had not crashed as previously stated but had been mistakenly shot down by Iran’s air defence system.

Overnight public attitudes changed as Iranians poured on to the streets in Tehran and other cities to mourn the dead and challenge the Islamic regime over its devastating mistake. Gone were the slogans heard during Soleimani’s funeral of “Death to the US” and “Death to Israel”. Instead, protesters chanted “Guards; you are the dictator; you are our Isis” and “Shame on you, guards; leave the country alone”.

The acknowledgement of Iranian culpability for the death of the 176 passenger and crew on board, including 82 Iranians and 63 Canadians, came after senior officials had denied the jet could have been hit by an Iranian missile and accused the US using such allegations for psychological warfare.

Officials, including the Iranian ambassador to the UK, have since retracted their statements, adding that they had previously been informed by Iranian authorities that Iran was not to blame.

Saeed Laylaz, an Iranian political analyst, said the decision by some in the military and political leadership to mislead others over the tragedy had rocked public trust in the regime. He compared it to the decision by Soviet leaders to hide facts about the disaster at the Chernobyl nuclear power station in 1986, a course of action that would ultimately contribute to the break-up of the Soviet Union.

“A major part of the public faith that the guards gained and its big military victory [attacking US forces] were damaged overnight in what is Iran’s equivalent of the Chernobyl disaster,” he said. “This has led to huge splits inside the ruling system, at a time the power struggle was already tense, on why the guards hid a reality even from the president when they knew from the first second of the incident what had happened.”

As tensions increased in Iran on Sunday, Major Gen Hossein Salami, the most senior commander in the Revolutionary Guards, was summoned to a closed session of parliament to answer questions about the role of the elite security force in the incident.

Mostafa Tajzadeh, a pro-reform former official who has since broken with the Islamic regime said the deception was shocking. “I admit that I could never believe this level of lying, hiding and fooling in the Islamic republic,” he wrote in a post on Instagram. “Why and how we have reached this level?”

The Revolutionary Guards has said it had not tried to hide its responsibility for the crash but had been examining the reasons behind the unintentional shooting. The country’s political leaders were informed of the mistake on Friday, said Amir Ali Hajizadeh, commander of the Revolutionary Guards’ air forces, who accepted responsibility for the mistake.

Iran says the US shares the blame for the tragedy because it initiated the period of military aggression when it killed Soleimani. Hardline politicians also insist that the increased domestic credibility gained by the Revolutionary Guards following Soleimani’s death and Iran’s retaliation against American troops in Iraq remains intact.

“That achievement is certainly not overshadowed by this mistake which was the result of US threats to hit back and some immature behaviours like the delayed acknowledgement of responsibility and the failure to cancel civilian flights,” said Hamid Reza Taraghi, a politician close to the country’s hardliners. “Iran’s policy of kicking the US out of the region is unchanged and you will see Iran will strike another major blow [against the US] directly or indirectly very soon.”

But many Iranians are furious, both with the apparent attempt to hide the truth and the earlier decision by Iranian authorities not to stop civilian flights when the heightened risk of war with the US had put the country’s air defence system on high alert.

“We don’t want the Islamic republic”, protesters in Tehran chanted at the weekend as they called for the resignation of top politicians including supreme leader Ayatollah Ali Khamenei.

Having promised to take revenge for Soleimani’s death on American soldiers, none were killed in Iran’s airstrikes on Iraqi bases. Instead, it is the second time in a week that dozens of Iranians have lost their lives after at least 60 people were crushed to death on Tuesday in a stampede at Soleimani’s burial.

Many in Iran feel that incompetent officials, with little respect for the lives of ordinary, are responsible. One bitter joke that is being widely shared on Iranian social media reads: “The Revolutionary Guards have sent a message to the US that, if you attack us once again, we will level Iran to the ground.”

How to make your 2020 goals achievable

Wall Street strategists say dollar could be set for…