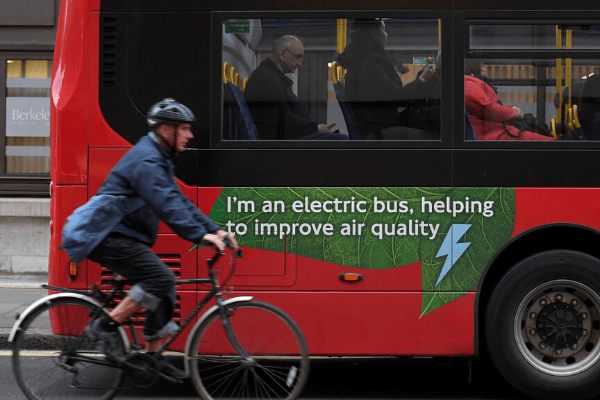 Labour announced a new windfall tax on oil and gas companies which the UK’s opposition party says will raise more than £11bn as part of its commitment to shift the UK to a low-carbon economy within the next decade.

The oil levy would be used to pay for a “just transition fund” providing an £11bn support package to help retrain 37,000 workers in the industry to “make the transition to a clean economy”.

Environmental protection was one of the central themes of the Labour manifesto announced on Thursday, underlining the party membership’s growing concern over the climate emergency.

Speaking at the manifesto launch in Birmingham the Labour leader Jeremy Corbyn promised a new £250bn “green transformation fund”, all funded by borrowing, to pay for policies including millions of electric car loans, a mass household insulation programme and a fleet of new state-controlled offshore wind farms.

But the party has watered down a commitment to reach net-zero carbon emissions by 2030. Instead, the party is pledging to remove a “substantial” proportion of emissions from the UK economy by 2030, stopping short of the target agreed by delegates at its annual conference in September.

At the same time, the party promised that nearly 90 per cent, not all, of electricity, would be renewable or low carbon in 10 years’ time and only pledged to deliver 50 per cent of home heating from renewable and low-carbon sources by 2030, reflecting the difficulty in replacing millions of household gas boilers.

The proposals were nevertheless well received by green groups. Professor Charlotte Burns, from the research group Brexit & Environment, said the proposals were “ambitious”, while Rebecca Newsom, head of politics at Greenpeace UK, welcomed the green emphasis in the document although she said it did not go far enough to tackle emissions from aviation.

Labour has stuck to previous pledges that it would renationalise National Grid and the energy networks — the pipes and wires that transport electricity and gas to homes and businesses. It would also take back into public hands the supply arms of the “Big Six” energy companies, including British Gas.

The prospect of a higher tax regime sparked concerns from the UK’s North Sea industry which warned that any increase in taxes would thwart investment needed to recover the remaining oil and gas in the region.

Industry representatives warned it would also leave Britain more heavily reliant on imports as oil and gas would still be needed as the country transitions to a greener economy.

But Labour argues the UK should have reaped greater tax revenues from North Sea operators over recent decades.

“Had the UK charged the same effective tax rate as the average rate charged by North Sea countries from 1992 to the present day, it would have collected an additional £117bn in taxes,” a Labour official said.

The party has compared UK tax rates with those raised by other North Sea countries; companies that produce oil and gas in the UK North Sea currently face a combined tax rate of 40 per cent compared with 50 per cent in the Netherlands and 78 per cent in Norway.

But oil and gas tax specialists said such comparisons were not comparing “apples with apples”.

Investors pour almost $400m into African fintech in a week