An issue that is dividing policymakers attracted nearly 1,000 comments. Here are the best responses 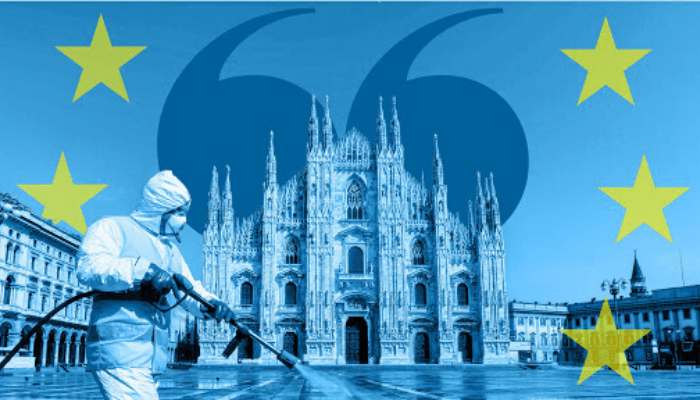 Monday’s Big Read from Miles Johnson in Rome, Sam Fleming in Brussels and Guy Chazan in Berlin analysed the “massive shift” in Euroscepticism in Italy over a perceived lack of support from its northern neighbours during the coronavirus crisis. With the country reeling from more than 17,000 deaths and 139,000 cases, many Italian politicians are now urging the eurozone to mutualise debt sales that would help fund the rebuilding efforts that lie ahead. The issue generated hundreds of comments and plenty of debate. Here are some edited highlights.

‘Germany must bite the bullet now’

Germany missed a trick when it could have mutualised Greek debt and set up a true ECB as a copy of the US central banking system. It was Germany’s chance to create a unified continent that also served its long-term interests. Instead it made a couple of halfhearted attempts like letting in the 1m Syrian refugees and releasing the spigot on quantitative easing on the euro. Not enough. Now it is nearly too late. Germany must bite the bullet now or watch Europe fall apart. And now means at breakfast this morning. And doing it means a true pooling of all resources. — Lancelot George
‘Hard to see the upside for Italy’

Covid aside, it makes no sense for Italy to be in a currency union with Germany. Their manufacturing base has been severely impacted and it’s hard to see the upside for Italy. — Cam
‘States need to be individually solvent’

The EU will only work if individual states are individually solvent. Otherwise all this talk of EU solidarity is meaningless PR, because — when it matters — Germany will look after Germany, France will look after France etc. — Underminer
‘Where would Italy go’

Italy will never leave the EU or the euro despite the demented bleating of their failed politicians. Where would they go? Without Europe they’re left to the own devices and competencies. A fate infinitely worse that sticking with the EU. Just a nonsense. They would fail just as completely as the Brexiters are about to. — Langley
‘Aiutati che il ciel ti aiuta’

In the last 20 years (not two months . . .) there has been no growth, no productivity growth, bureaucracy is a nightmare and in two months of emergency the government could not even write a proper document deciding what to do next. Italy and Italians should start asking why we are at this stage, and how to fix our country ourselves — “aiutati che il ciel ti aiuta (God helps those who help themselves),” as the locals say. — Dreamland
‘Mutualisation is a euphemism’

Those who want to help Italy, and to help keep the EU together, could start by stop using the euphemism “mutualisation”. Be honest and say they’re proposing to have the well-off countries (call them Germany as shorthand) cosign bonds that the weaker countries (call them Italy) are incapable of paying and have limited desire to pay even if they could. The EU already has mechanisms whereby funds are transferred from rich countries to poor. Rather then issuing mutual bonds which will only drive the wealthy countries’ voters into a rage when the least responsible inevitably default on their share, let’s just have the wealthy agree to make a one-time contribution to the most indebted, possibly paid out over a couple years. €20bn? €50bn?

In an ideal world, this would be partly paid by cutting back on such sinkholes as the Brussels bureaucracy and CAP, but since we know that won’t happen, let’s just make this one-time payment as a sign of solidarity with those struggling with the virus and with refugees. And just move on from there with there being no expectation that there’s more to come and no sense that this is just the first step in ever closer fiscal union. — California Dreaming
‘Italy’s debt is sustainable’

It is about lowering the cost of funding. It is not about repayment. Italy spends 6-7 per cent of budget and that is in line with what Germany and France spends. And you may not be aware that public debt is 135 per cent of GDP or roughly €2.3tn. Private savings are about €10tn. Italy’s net debt position is very, very sustainable. In addition, much of the public debt is actually held by Italians and Italian institutions. — Carlo Langnotti in reply to California Dreaming
‘Berlin will face open hostility’

If Germany at this moment insists on their traditional policies, no matter how prudent they may be, they will face the open hostility of those who are drowning and they see someone rationing the life-jackets for no apparent reason. They may have their way, for the short term. But they will lose all hearts and minds for a generation. In such a case no one will expect the EU to last for a generation. No matter how unattractive the alternatives are. People first punish their enemies, then evaluate alternatives. — A Greek
‘Italian default would mean the end of the euro’

What everyone seems to be missing is how devastating and catastrophic an Italian default would be for Europe and the globe. Italy is not tiny Greece. It would mean the end of the euro and a very probable banking catastrophe. Good luck to us all. — Mr Coletti
‘In the EU, outside the EMU’

Italy is obviously better off inside the EU but outside the EMU. Crisis just makes it even more obvious. — Joerg Washington
‘An Italian-Swiss-UK FTA?’

Italy, Switzerland, UK would be a great basis for a European free trade area that actually worked and allowed sovereign state members to compete and prosper with no pretensions to “ever closer union”, instead allowing any closer union to occur (or not) at the demand of the people. — RiskManager
‘The issue is not debt mutualisation’

This entire debate is not framed properly. The issue is not debt mutualisation, it’s support from the central bank. Italy on the other hand toils away under the boot of the ECB, which basically treats it how the Fed treats dollarised Ecuador, some foreign entity over which it bears no responsibility. That is the signal it has sent to the market time and time again (see full comment here). — DamianB
‘You cannot ask for more austerity’

The virus is hitting hardest the countries which had already been weakened by the euro (Italy, Spain). Without a common fiscal response and massive support to those economies, divergences within the eurozone are going to widen and reach a breaking point where the only choice for those countries will be to default on their debt and/or leave the eurozone. You cannot ask them for another decade of stronger austerity to pay back for the price of the pandemic.

I am not sure if I follow the Italian argument. They now want to leave the EU because without massive external help and coronabonds they will not survive? How will that change once they do leave? — NYC Frenchie
‘Italy helps Russia and China divide Europe’

The ECB is now closing the spread, ESM money will start to flow, new fund for unemployment is being set up by Brussels. Meanwhile, I have seen the videos with Italians replacing EU flags with Chinese ones. Do they really think that the next time crisis hits China will be there to close the spread or take their patients in? I don’t think so. Italy is useful to Russians and Chinese only as far as it helps them to divide Europe into more manageable chunks. They will have no interest in holding Italy’s hand once there is nothing to be gained geopolitically. — Laplacian
‘Italy must live with its choices’

Some stupid questions from a German to the Italians:

1. Why should we give you our money while many of your politicians, journalists and citizens constantly insult us?

2. Why should we give you our money while your last government has just fulfilled one of its major electoral promises and lowered your pension age, whereas we and other people in northern Europe have to work longer and longer?

3. Why should we give you our money while you again and again vote people like Salvini, di Maio and Berlusconi into government, while you prefer Putin, Trump and Xi to Renzi, Rutte, Monti, Merkel and Draghi?

4. Why can a country like Spain make significant economic and fiscal progress but you cannot?

Your country is (still) a democracy and you have made choices, now live with the consequences. — Linus
‘Co-ordinated response shows European spirit’

If you agree that the coronavirus is a symmetric shock then there should be a co-ordinated European response . . . If instead, you think that each nation should respond independently, then you may not have the European spirit of the founding fathers. — Claudio Marchiori
‘Who would trust these people’

What have we done? We have elected an utterly inept political class who has, inter alia, lowered the retirement age (Italy already has the shortest working life in EU) and splashed out on subsidies (with an already alarming proportion of current v capital expenditure). Who on earth would trust these people? I am Italian and I would not. The only way out is European Commission issuing and spending debt. This is also what [Carlo] Calenda suggests after rambling on about war reparations. — Luca
‘Do not spit in our hands’

I strongly feel that we should come together in ad hoc way to combat this crisis as much as we can, even through some kind of temporary debt sharing arrangements. But the way to achieve this is not to spit in the hands of whom a subsequent handout is expected. If anything, the insulting expressions from some southern European politicians have made me more rather than less reluctant to share some of the burden. — The daring Dutchman