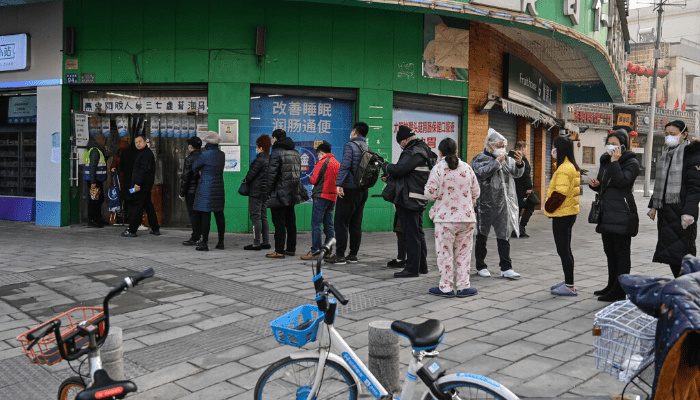 International businesses from airlines and carmakers to tech and consumer groups have drastically curbed their China operations as the corporate impact of the coronavirus crisis worsens.

British Airways on Wednesday suspended all flights to and from mainland China, while Starbucks shuttered 2,000 outlets and retailers such as Uniqlo and H&M closed dozens of stores.

Chinese officials said the death toll from the outbreak had risen to 132, with confirmed cases in the country climbing to 5,974. Evacuations are underway to take foreign nationals out of the central Chinese city of Wuhan, the heart of the outbreak in Hubei province, with Japanese and US flights departing on Wednesday morning.

Big airlines have been among companies worst affected by the crisis, as concerns mount over the impact on global travel. The share price of BA parent IAG has slid more than 10 per cent since mid-January, while European rivals Air France-KLM and Lufthansa have also been hit.

BA, which flies to Beijing and Shanghai, said its flight suspensions followed Foreign Office advice that UK nationals avoid all but essential travel to mainland China.

“We apologise to customers for the inconvenience, but the safety of our customers and crew is always our priority,” the airline said. It has blocked out sales until the beginning of March.

India’s largest private airline IndiGo announced on Wednesday it was suspending its routes to Chengdu and Hong Kong but would continue flying to Guangzhou. United Airlines has suspended some flights to China and Hong Kong.

Wednesday’s moves followed a decision by Hong Kong airline Cathay Pacific to halve the number of its flights to and from mainland China after the territory’s chief executive Carrie Lam pledged to scale back transport links with the mainland to prevent the spread of the virus.

More than a billion dollars were wiped from Cathay’s market value on Wednesday as its share price slid as much as 5 per cent in early trading.

They include Jiangsu and Guangdong, tech manufacturing hubs that are crucial for global supply chains.

Among big tech groups with plants in at least one of the hubs are Foxconn and Pegatron, the two largest assemblers of the iPhone, Japanese components and machinery makers such as Murata and Japan Display, and South Korean electronics giants Samsung and LG.

The motor industry which has plants scattered across the region has also been particularly affected. Japan’s Toyota and South Korea’s Hyundai are among carmakers to have kept their plants shut. Japanese groups Honda and Nissan have started flying out their non-Chinese workers, as have French groups PSA and Renault.

Even car facilities outside the Hubei area are being affected because of the parts manufacturers housed in the region.

“The biggest issue for those of us not in Wuhan or Hubei is we rely on some suppliers who are,” said a senior executive at one international auto group, who added that supply lines had also been hit by Wuhan’s rail freeze.

Global consumer brands have also been forced to halt some of their Chinese operations.

Apple warned on Tuesday about the potential impact of the outbreak on its supply chain, widening its guidance on revenue to take the uncertainty into account.

“The situation is unfolding, it’s very new,” said chief financial officer Luca Maestri. “That’s the reason we put a wider range on our guidance.” He added that Apple had suppliers in the Wuhan areas that were being isolated, but that it had mitigation plans to source components from elsewhere if needed.

Other companies including HSBC, Standard Chartered, LG Electronics and Facebook have suspended or restricted travel by employees to China.

Hong Kong’s stock market, the first in China to reopen after the lunar new year holiday, fell sharply with the benchmark Hang Seng index down almost 3 per cent.

The Hang Seng China Enterprises Index, which tracks the performance of large mainland companies listed in the territory, was down by a similar margin. However, European shares opened firmer and US futures trading pointed to gains on Wall Street.