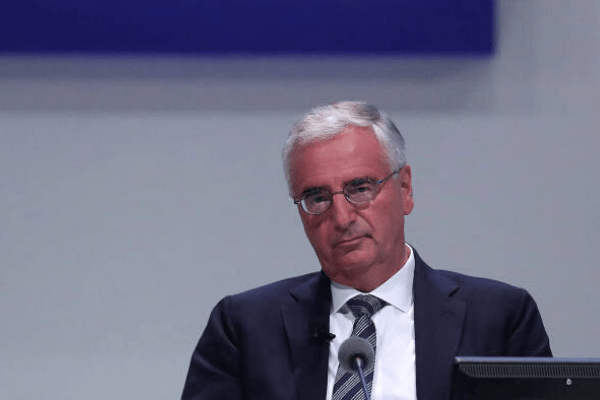 Cerberus has lost faith in Deutsche Bank’s chairman Paul Achleitner and is pushing for him to be replaced, according to three people familiar with the worsening relationship between the US private equity firm and Germany’s biggest bank.

The desire for regime change has hardened since Deutsche abandoned merger talks with Commerzbank in April, these people said, scuppering the plans of Cerberus, which is Deutsche’s third-largest shareholder with a 3 per cent stake and the second-biggest shareholder in Commerzbank. Mr Achleitner endorsed ending the talks.

Deutsche Bank’s other big shareholders — two members of the Qatari royal family, funds managed by former JPMorgan Chase executive Doug Braunstein and asset manager BlackRock — also have an increasingly negative view of Mr Achleitner’s performance, according to people familiar with their views, which have been expressed in informal talks between the top investors.

Since Mr Achleitner became chairman of Deutsche Bank in 2012, the bank has accrued losses of more than €10bn, fired three chief executives and paid out €83m in severance pay to 17 executives who left the bank early. It also embarked on five new strategies and raised €20bn in fresh equity while its share price collapsed by three quarters.

However, although the other large shareholders would like Mr Achleitner to step down before his term ends in 2022, they are not convinced that now is the right time for change.

“Cerberus is much more pushy [than the others],” said one person close to a top five investor, adding that such a move could further destabilise the struggling lender during the most radical restructuring in its 149-year history, which involves cutting 18,000 jobs, shrinking its balance sheet by more than a fifth and cutting €6bn in costs.

“Deutsche is under a lot of pressure and strain already, and we need to make sure we are not adding to this,” said a second person close to the matter, adding that “different [investors] have different views on this matter”.

At the bank’s annual shareholder meeting in May, 90 per cent of the investors present voted against a motion to remove Mr Achleitner from the board.

Cerberus has paper losses of more than half a billion euros since it built its stake two years ago. Unusually, it was also hired by Deutsche as an adviser on how to cut costs and shrink its balance sheet.

The views of Cerberus on Deutsche’s operations have not been appreciated by everyone inside the bank. “They are behaving as if they owned a 30 per cent stake, not a 3 per cent one,” said one person close to the matter.

Another one said that the US fund needed to keep in mind that “Deutsche Bank is not a private equity asset where the investor can send its own troops, install its own management and tell it what to do”.

One hurdle to ousting the chairman is to find a suitable successor that brings the required skills and is willing to take the €860,000-a-year job, which attracts a lot of public scrutiny and a significant risk of failure.

“Potential successors are not really queueing up,” said one person familiar with the matter, adding that candidates need to be well versed in banking, politically savvy and German-speaking.

A Frankfurt-based asset manager told the Financial Times that Deutsche Börse’s chief executive Theo Weimer was a plausible candidate, given his background as a former partner of Goldman Sachs and chief executive of UniCredit-owned HypoVereinsbank, but the exchange’s chairman is keen to hold on to him.

Brewers are walking on tight rope