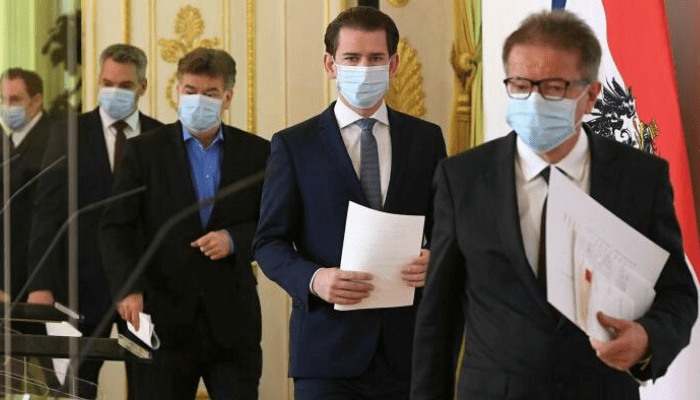 Austria has set out plans to become the first country in Europe to ease its lockdown against the coronavirus pandemic, with shops due to reopen as early as next week.

Flanked by senior government ministers, Chancellor Sebastian Kurz on Monday presented a timetable to restart the Austrian economy, detailing a series of phased steps to normalise life while minimising the risk of a surge in new infections.

With many European countries still battling to hold down cases of COVID-19, and hospital systems on the edge of capacity, Austria’s plan will be intensely scrutinised: seen either as a bold decision to balance public and economic health or as a gamble that prioritises the latter.

Several European countries have established task forces to look at how best to wind back containment measures, but faced with huge uncertainties, many officials have yet to commit to any clear strategy.

As well as pledging a gradual lifting of restrictions on public life, the Austrian plan also makes clear that months of controlling measures still lie ahead.

Mr Kurz urged Austrians to cancel any plans to celebrate Easter this week and stressed that restrictions could only be eased if rules were scrupulously adhered to. “Keep to the measures, avoid social contacts, keep your distance in public space,” the chancellor said.

According to the timetable, small shops will be permitted to open again from April 14 as well as large DIY stores and garden centres.

As of May 1, other businesses deemed slightly higher risk, including hair salons, will be allowed to reopen.

The government said there was a possibility restaurants and cafés would be allowed to start operating again in mid-May, but declined to give an exact date.
Public events will not be permitted to take place until July. No date has been set for schools to reopen.

The government also announced it would extend its requirement for Austrians to wear facemasks. In addition to their mandatory use in supermarkets and other shops that are currently open, they will also be required on all public transport.

Austrian authorities have so far confirmed 12,008 cases of the novel coronavirus.

Aggressive enforcement of containment measures, such as hefty police fines of thousands of euros, and well-resourced medical facilities, including one of the highest numbers of intensive care beds per capita in Europe, have proved relatively successful in limiting the impact of the virus in the central European country.

The Austrian growth rate of daily new infections has slowed to 2.8 per cent from more than 40 per cent in mid-March, health authorities reported on Sunday.

Mr Kurz’s handling of the pandemic, and the performance of his health minister, the Green party’s Rudolf Anschober — has so-far won plaudits at home and abroad.

The country’s fight against the novel coronavirus has not been without difficulty, however: the western mountainous region of Tyrol is one of the worst-afflicted areas in Europe.

Ski resorts in Tyrol — packed with partying tourists from across the continent — stayed open for days even after the first cases of coronavirus were confirmed there in the first week of March.

Some, such as Ischgl, have become bywords for politicians putting economic interests above public health — a charge Mr Kurz’s gambit to reopen the economy may yet encourage if infections in Austria tick up as restrictions on public life are lifted.