Unattractive fiscals stunt more than half of Nigeria’s oil blocs

Nigeria has many revenue problems, and one of the most of them is unproductive oil blocs. The hydra-headed monster is difficult to understand. This is because it has several layers with many sides, Dipo Oladehinde writes.

Nigeria’s oil blocs are stunted because of unattractive fiscal terms.  This economic situation mirrors a person sitting in a river while soap suds get into their eyes.

Africa’s biggest oil producer sits atop over 36 billion barrels of crude oil reserves but has the world’s largest number of poor people.

More than half of Nigeria’s oil and gas blocks are idle hence a target set over a decade ago to raise reserves to 40 billion remains illusory. Production has hovered at two million barrels per day for years.

The initial diagnosis was that government control was the culprit, but 23 years after the introduction of the Production Sharing Contract (PSC) which now make up a sizable chunk of Nigeria’s oil output there are still challenges.

Under a PSC, extractive companies bear the cost of production and reimbursed in the event of successful exploration and development by the allocation of crude oil produced from the fields after which National Petroleum Investment Management Services (NAPIMS) is entitled to between 20 percent and 60 percent of the profits accruing from the operations.

It differs from joint venture arrangements which obligate the government to commit cash to aid exploration, development, and production. In Nigeria, the parties apart from NAPIMS fund oil exploration activities.

Despite the advantage of PSC, the audited report of National Petroleum Investment Management Services (NAPIMS) showed there are at least 24 non-producing PSC oil blocs in Africa’s biggest oil-producing country. 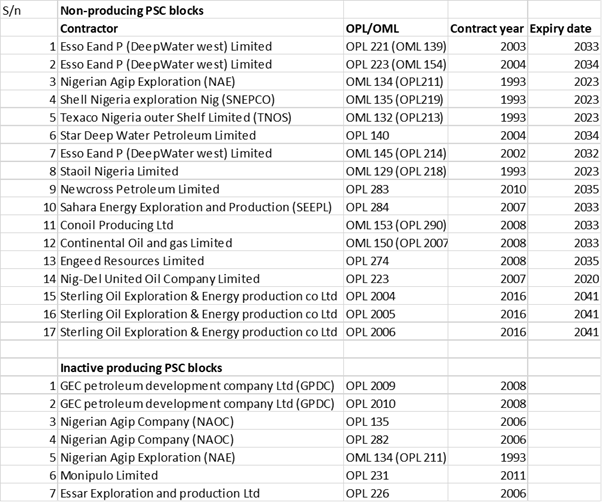 Some stakeholders say the failure of the Nigerian government to quickly review fiscal policies governing oil exploration of oil in deep, offshore waters is costing the country a loss in oil revenue amounting to trillions of Naira.

Beyond idle PSC oil blocs, data obtained from the Department of Petroleum Resources, the oil sector regulator in Nigeria, also showed that out of a total 390 oil bloc in the country, 211 are yet to be allocated by the Federal Government.

In the Chad basin, 40 out of 46 blocs are open; in the oil-rich Niger Delta, 34 out of 187 blocks are still idle, while Sokoto’s 28 blocs remain unallocated.

Some experts say idle oil fields governed by PSC now make up a sizable chunk of Nigeria’s oil output leading to less government take in the form of royalties and taxes as a result of obsolete laws that have not changed in more than 25 years.

The Nigeria Extractive Industries Transparency Initiative (NEITI) said Nigeria lost about $28 billion over a period of 10 years as a result of the failure to review the PSC act.

The country signed the first set of PSCs in 1993, while the DOIBPSC was enacted in 1999.

The Act establishes the legal framework for deep offshore and inland oil activities, including the applicable royalties and key fiscal terms.

Major implications of the new bill

Investors with existing deep-water projects in Nigeria face potential increases to the royalties payable on their production as operators in the deepest fields will now pay royalties, when previously none had applied. This may challenge the returns of ongoing projects and the economics of those awaiting the Final Investment Decision.

The new amendment also seeks to address the applicability of oil price royalties going forward and establishes a new royalty (even if some of the detail behind how it will be calculated is lacking).

The Minister of Petroleum has a new right to call for a review of production sharing contracts every eight years and imposes new penalties of a fine not below N500,000,000 or five years imprisonment for non-compliance.

Uncertainty in some areas

While the Amendment helps to offer certainty about the near term fiscal position (and may even be lower than some of the industry’s expectations), the Petroleum Industry Bill looms large (as ever) and may, when passed, operate to further change the fiscal terms applicable to projects and participants.

The Minister’s right to review PSC terms will undermine certainty around the contractual and fiscal terms that apply. The Amendment does not contain any detail about how any such review process would be undertaken and how the Government and PSC holders must reach an agreement on the findings of such a review.

Smaller countries are having attractive fiscals

For instance, Equatorial Guinea is expecting $1.4 billion investments in its oil and gas sector this year as a result of attractive fiscals, while Senegal has seen investment from oil exploration companies such as the United Kingdom’s Cairn Energy and Texas’s Kosmos Energy, respectively who discovered some of the largest offshore gas deposits between Senegal and neighbouring Mauritania’s territorial waters.

Despite its huge oil reserves, Nigeria was able to attract only $3 billion, or 4 percent, out of the $70 billion committed on new projects in Africa between 2015 and 2019.

Some experts have recommended that for Nigeria to turn the tide against boosting idle fields or declining Oil and Gas investments there must be deliberate multi-agency efforts to bring about needed reforms. But the efforts must start with bringing credibility to both fiscal and monetary policies.

“The story of oil and gas in Nigeria is a story of missed opportunities, which can be solved by having an attractive fiscal regime that other smaller African countries are already implementing,” Niyi Awodeyi, CEO at Subterra Energy Resources Limited said.

Support for this report was provided by the Premium Times Centre for Investigative Journalism (PTCIJ) through its Natural Resource and Extractive Programme.

Millions of dollars down the drain, oil in the north remains elusive

As soot ravages Niger Delta: Nigeria may move to era of fighting for the environment…

Kenneth Kaunda: The end of an era