When Nigeria began her global domination of literary dom with the likes of Wole Soyinka, Chinua Achebe, Ben Okri, among others, many wondered what the future will hold.

Today, with the likes of Chimamanda Ngozi Adichie, Teju Cole, Adaobi Nwaubani, among others, it is safe to say that the future came fully made.

And soundtracking these literary heavyweights is the presence of literary grooming grounds, often in the form of fellowships and competitions, such as the Nigerian Liqueﬁed Natural Gas (NLNG) Prize for Literature, Literary Criticism and Science.

This competition, which is the biggest literary award in Africa, has piloted several creative minds with groundbreaking takeoffs in their careers, for the past 17 years.

With Cheluchi Onyemelukwe-Onuobia and Uchechukwu Peter Umezurike being the latest recipients of the 2021 NLNG Prize for Literature ($100,000) and Literary Criticism (N1,000,000), respectively, NLNG has continued stretching its literary apostolate across Africa. 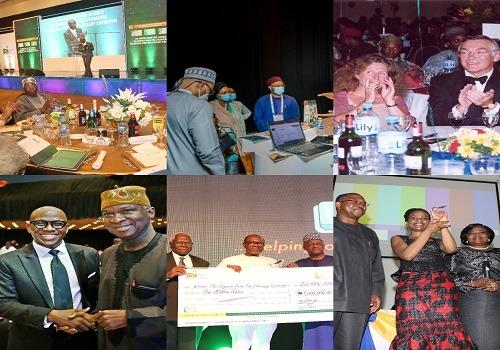 According to the NLNG Science Prize Advisory Board Chairperson, Alfred Akpoveta Susu, the scientists jostling for the prize did not “meet the criteria…which involved seeking solutions to Nigeria’s problems and development issues.”

Debuting in 2004, the NLNG awards have been a major growth driver in Nigeria’s creative and science innovation sectors. It has successfully brought diverse brilliant minds, from authors to literary critics to scientists together.

Due to the all-encompassing nature of scientiﬁc innovations, the NLNG has also trademarked itself as non-partisan by celebrating scientiﬁc breakthroughs from anywhere in the world, especially those that solve a Nigerian problem.

Every October, the NLNG announces its winners to commemorate the ﬁrst export of LNG cargo by NLNG on October 9, 1999. However, due to the global slowdown of the COVID-19 pandemic, it snoozed the awards for last year and transferred the entries to this year.

Behind The 2021 Winners Literary Criticism

Umezurike was awarded for his critical essays – “Self-Publishing in the era of military rule in Nigeria, 1985 – 1999,” “Postcolonial Ogres in Ngugi Wa Thiong’o’s Wizard of the Crow,” and “Land of cemetery: funereal images in the poetry of Musa Idris Okpanachi.”

According to Umezurike, the ﬁrst essay interrogates the ways in which self-publishing emerged in Nigeria, its networks and their impact on public readership to demonstrate how self-publishing challenges the communications circuit model theorized by Robert Darnton.

It also argues that self-publishing subverts the traditional model of book production by creating a viable alternative through which literary writers could have their works published and mobilize themselves against military tyranny.

The other winning essay on Ngugi Wa Thiong’o’s work analyzes the effects of the said text on the neocolonial mindset of the political elite. It also shows how the text impacts understanding of the leadership failures of the colonialists.

His ﬁnal winning essay explores how the author, Okpanachi, employs funereal imagery to comment on the state’s morbid relationship with its citizenry, and how it articulates a cynical commentary on postcolonial Nigeria.

Onyemelukwe-Onuobia novel, The Son of the House, bested 11 authors, including Samuel Monye’s Give Us Each Day, Obinna Udenwa’s The Colours of Hatred, Abi Dare’s The Girl With The Louding Voice, among others, to claim the winning prize.

According to NLNG Literature Prize Advisory Board Chairperson, Professor Akachi Adimora-Ezeigbo, the novel was chosen not only because of its ability to tell human and indeed universal stories of rural as against urban life, suffering and survival, loss and redemption, decline and renaissance, destruction and reconstruction, and death and rebirth.

She noted that The Son of the House is a profoundly unconventional novel that portrays the lives of two women in different worlds whose paths crossed during captivity, adding that “but they soon realised their path had earlier crossed at various points.

The stories of Nwabulu, a one-time housemaid and now a successful fashion designer, and Julie, an educated woman who lived through tricks, deceits and manipulations, are told through a mosaic plot
structure against the backdrop of modernity and traditional patriarchy, poverty and neglect.”
The Road From Here

The NLNG has pledged to continue the tradition of boosting the country’s creative sector and also proffering solutions to its myriad developmental challenges via the science prize award. It hopes to consolidate its legacy with more keen contests next year.

Victoria Island to the World

After 45-bittersweet-years, Odu’a bets on innovation, new strategies for its future

Who needs a brand culture?

Africa cup of nations: What stands out?

Is it worth living in Lagos?-A review of Professor Hope Eghagha and Karen King-Aribisala’s…