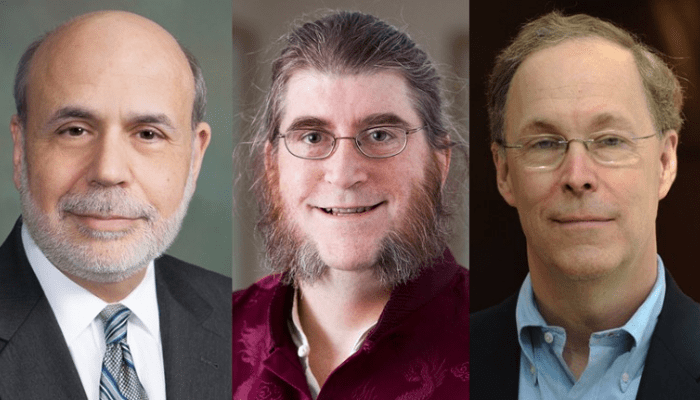 The trio of Ben Bernanke, Douglas Diamond, and Philip Dybvig shared the 2022 Nobel prize in economics for their pivotal theory of how banks work and how they fail. It didn’t happen in a day. The Nobel Prize-winning work is a product of – first of all – each of the three wise men’s strong aptitude for continuous learning and research.

Making of the ‘wise men’

The research of the three laureates has helped to explain both why banks exist in the form they do and why they have fragilities that can be devastating to the economy, as shown in the Wall Street crash of 1929 and the Great Depression that followed, and in the global financial crisis of 2007–09.

“Insights from their work were essential in enabling banks, governments, and international institutions to cope with the COVID-19 pandemic without catastrophic economic consequences,” the Nobel committee said in its 10 October announcement.

For instance, Diamond and Dybvig presented a mathematical model in 1981 showing that banks act as intermediaries between savers and borrowers, smoothing out the incompatibility of their requirements.

“Savers want to be able to invest and withdraw on a short-term basis, but borrowers such as businesses need long-term loans and commitments. Because in general, not all savers need to withdraw at the same time, banks can absorb the fluctuations to maintain ‘liquidity’, thus enabling money to circulate, with benefits to society,” Diamond and Dybvig’s research work showed.

Diamond and Dybvig also developed theoretical models that explain why banks exist and how their role in society makes them vulnerable to rumors about their impending collapse, and how society can lessen this vulnerability. These insights form the foundation of modern bank regulation.

Through statistical analysis and historical source research, Bernanke demonstrated how failing banks played a decisive role in the global depression of the 1930s, the worst economic crisis in modern history.

“The collapse of the banking system explains why the downturn was not only deep but also long-lasting,” a note seen by BusinessDay.

It further illustrates the importance of well-functioning bank regulation and was also the reasoning behind crucial elements of economic policy during the financial crisis of 2008–2009.

Specifically, Diamond and Dybvig presented a theory of maturity transformation and showed that an institution using demand deposits to finance long-term projects is the most efficient arrangement, but that, at the same time, this arrangement has an inherent vulnerability: bank runs may arise.

“Diamond and Dybvig explained how a liquidity problem can arise through a self-fulfilling run on the bank,” says economist Atif Mian at Princeton University in New Jersey. “The simplicity of their mathematical argument is a thing of beauty, and the work has important policy implications.”

Survival of the fittest

In particular, Bernanke’s research showed that the downturn became so deep and so protracted primarily because bank failures destroyed valuable banking relationships, and the resulting credit supply contraction left significant scars on the real economy.

His investigation identified the elements that contributed significantly to the decline in the gross domestic product using a combination of historical sources and statistical techniques (GDP).

He discovered that the slump was mostly caused by elements that were closely related to collapsing banks, some of which he identified were depositors’ hasty attempts to withdraw their money, which causes bank runs because the bank’s reserves won’t be sufficient to cover everything being withdrawn, forcing it to conduct a free sale of assets at potentially significant losses.

He also explained why, in this case, it led to a long-lived depression that became the largest economic crisis in modern history.

“The failure of a bank results in a loss of crucial information that banks acquire (and can pass on to others) on savers and borrowers. Without such assurances about the creditworthiness of businesses and households, liquidity cannot be quickly re-established,” Bernanke said.

These insights shed light on the 2007–09 crash. It began with a slump in the housing sector, but led to panic in the financial markets, as Diamond and Dybvig’s model predicts.

This triggered the collapse of financial-services companies such as Lehman Brothers, based in New York City, and created a global economic downturn. At the time, Bernanke was chair of the US Federal Reserve, which, along with the US Treasury, intervened as an emergency lender to preserve some liquidity and keep commercial banks from collapse. Similar interventions happened globally.