The NBCC invites you to an afternoon of fun & entertainment at the official launch of Project Hope. Join Chairman of the Day, Prince Julius Adelusi Adeluyi,OFR MNI, and Host, Ali Baba at this prestigious event. Register here for virtual attendance. 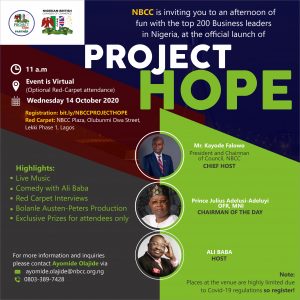 ABOUT THE NBCC PLAZA

On the 25th of June, 2015 construction began on the NBCC Plaza with the foundation laying by Governor Akinwunmi Ambode represented by his Deputy, Mrs Oluranti Adegbule, Chief Kensington Adebutu of Kensington Adebutu foundation, Chief Adekunle Ojora, the Founding Secretary of the Chamber and Patron, and Prince Adeyemi Adefulu the then President & Chairman of Council of the Chamber.

The completion of the Plaza will serve as a legacy of the relationship between Nigeria and Britain, provide incubation for British businesses seeking a base in Nigeria and Nigerian business seeking to expand. The goal is to provide private sector players the facilities and information necessary to conduct their businesses effectively and profitably in Nigeria, or in the United Kingdom. We want to give Hope to all and sundry and we boldly say that all Hope is not lost.

There is a huge untapped potential further enriched by Brexit that we want to position our members and non-members alike to fully exploit. The NBCC Plaza stands 4 floors tall in Lekki Lagos and is scheduled to be completed in February 2021. This edifice is an ultra-modern business empowerment facility planned to house, amongst others, a British Trade Centre in Nigeria. This will make it a lot easier for Nigerian and British businesses to exchange information and to trade more.

The TEDx experience is now in Apapa