Businesses say one of the most fundamental risks facing them in Nigeria is regulatory risk which has significant impact on their operations. In the oil and gas sector, new rules introduced recently has compelled oil companies to pay back taxes worth billions of dollars and telecommunication companies battle new rules by the regulator.

This is affecting the country’s ability to compete as smaller African countries are reaping the fallouts of Nigeria’s poor regulatory environment. Mozambique for example has earned over $30bn in new oil and gas investments while Nigeria’s has seen barely 10 percent of that amount.

Yet, Nigeria’s fundamentals are attractive to investors. It has Africa’s largest market, abundant natural resources and a robust business environment replete with resilient entrepreneurs. This year’s French Week organised by the Franco-

Nigerian Chamber of Commerce held an Economic Summit in Lagos on November 25 to discuss how companies can navigate the tough business environment in Nigeria. 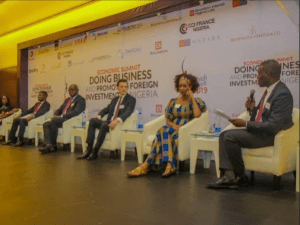 Yomi Olugbenro, tax partner at Deloite in his presentation lauded the passage of the Finance bill by the Senate saying that it will help Nigeria’s quest to improve the ease of paying taxes. “The expectation is that this bill will be passed
together with the appropriation bill so that come first January it can become law.”

Olugbenro said the Finance Bill contains a lot of positives apart from the much discussed VAT increase from 5 percent to 7.5 percent. The bill cushions the impact of higher taxes by exempting smaller companies and some goods and services.

The Bill proposes fiscal measures in support of the 2020 Budget of the Federal Government of Nigeria with extensive tax implications for the country. With a total proposed expenditure of N10.33 trillion against total expected revenue of N8.15 trillion, resulting in a deficit of N2.18 trillion; the 2020 Budget is projected to be financed partly by tax revenues expected to be generated through the key fiscal changes introduced by the Bill.

Among other things, it provides excess dividend tax to apply only to untaxed distributions other than profits specifically exempted from tax and franked investment income. Small businesses with turnover less than N25m to be
exempted from Companies Income Tax and lower CIT rate of 20% to apply to medium-sized companies with turnover between N25m and N100m

The Bill repeals section 60 of the Petroleum Profits Tax Act and effectively introduces Withholding Tax (“WHT”) of 10% on dividends paid out of the profits of companies engaged in petroleum operations in Nigeria. By this measure, the Bill seeks to remove the tax exemption granted under the PPTA in respect of such income or dividends

All these proposals have significant implication for businesses but the government has designed the bill to raise taxes without hurting businesses, Olugbenro said.

Olinma said that Nigeria may be the largest market on the continent but it must fix fundamental issues including poor infrastructure and the perceived difficult regulatory environment to be able to attract new investments suggesting that perhaps the country can direct its energy to fixing things that are broken.

Chizoba Adigwe, the CEO of Carbon Afrika, in her presentation highlighted the opportunities that exist for investment in the South eastern part of Nigeria. These include in manufacturing, trade and services and said some investments made including in auto assembly plants are crystallising in the state opening new vistas for investments.

The panel members agreed that though there are challenges and the economy still growing slowly, there are still opportunities to succeed in Nigeria for businesses that are resilient.

The Franco-Nigerian Chamber of Commerce and Industry (FNCCI) holds its French Week Celebration every year and this year it is running from November 22 to 29. FNCCI says it is an epic celebration that brings together business
figures from France and Nigeria in an atmosphere of networking and business exchanges, the organisers say.

French Week which has been organised for the past 30 years has become a veritable platform to promote bi-lateral business relationship between Nigeria and France.

“France-Nigerian relations have improved over the years and continues to grow strong,” says Laurence Monmayrant, French Consul General to Nigeria in her address at event.

Monmayrant said that France is an important trade partner for Africa and is the second-largest exporter to the continent so the goal is to enhance partnerships between French and African businesses in order to create new forms of cooperation.

“We expect that 2019 would account for more investments as French companies continue to show interest in the Nigerian economy,” Monmayrant, said.

Moses Umoru, director general of the FNCCI said, “The goal of the French Week is to sustain business relationship between France and Nigeria and to see how this partnership can create an opportunity for Nigerian firms to also
increase trade with France,”

Eonomic Summit of the French week is aimed at bringing together key business and government figures From France and Nigeria to discuss how to create more growth opportunities for our both countries. The economic summit of the
French Week brings together key decision makers in government and the organized private sector and creates a platform for networking exchange and partnerships.