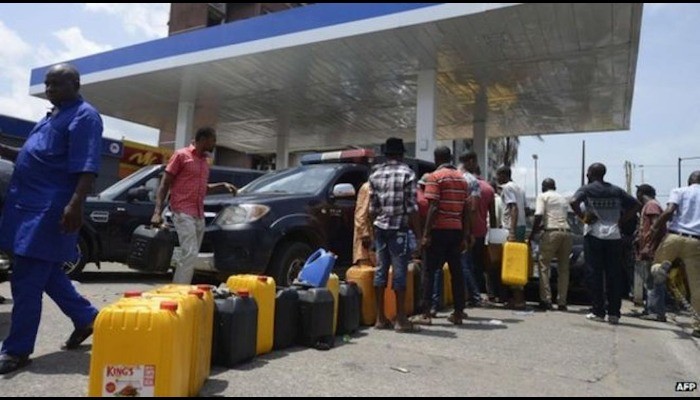 Petrol scarcity has worsened in Lagos and some other parts of the country owing to bad roads hampering distribution, even as the Nigerian National Petroleum Company Limited (NNPC) remains the sole supplier of the product in the country.

For the past six months, the federal and Lagos State governments have abandoned a failed portion of the road linking Brewery-Ijora-7UP to Apapa, which is home to the nation’s busiest seaports and many fuel tank farms.

Trucks heading into Apapa and leaving the port city struggle to remain steady on the roads with craters deep enough to swallow a car. Trucks routinely fall over spilling content as traffic personnel stand helpless in the ensuing mayhem.

This situation has been exacerbated by the ongoing construction of the bridge out of Apapa, leading to its closure for the past three months, forcing many road users to follow a patchwork of scrabby roads under the bridge.

The governments, both in Lagos and Abuja, did not make alternative arrangements before shutting down the bridge, and construction work has proceeded at a snail’s pace.

BusinessDay gathered that many depots currently do not have petrol and NIPCO Apapa depot that has stock, even with a 250-capacity park, is unable to handle the volume of tankers trying to get into its depot, largely because the trucks that have been loaded are unable to get out.

NIPCO’s depot was constructed inside 9.5 hectares of land the company acquired due to its strategic nature to access Apapa Oil Jetty, which supplies about 50 percent of the nation’s fuel requirements.

NIPCO’s petroleum storage terminal has a storage capacity of 76 million litres and has been linked with dedicated pipelines from all three Apapa jetties.

The terminal has unique pipeline facilities to receive petrol, diesel and kerosene simultaneously from all the three jetties. The distribution is facilitated through 10 fully automated loading gantries, which have the ability to dispense 12 million litres of petroleum products per day.

The difficulty accessing the NIPCO terminal has worsened the traffic situation in Apapa such that the resident association is warning members to abandon their vehicles and hop on ferries to get out of Apapa, afterwards, they can board taxis to their destinations.

“Please, exercise a little patience, plan your movements, alternatively use water transportation to the island and e-hailing cabs to your various destinations in the meantime,” said an advisory issued to Apapa residents seen by BusinessDay.

This messy situation is what the NNPC has blamed for the petrol queues in Lagos and Abuja and other cities across the country, when it says it has about 2 billion litres of petrol in stock.

“The recent queues in Lagos are largely due to ongoing road infrastructure projects around Apapa and access road challenges in some parts of Lagos depots,” said Adeyemi Adetunji, executive vice president, downstream at NNPC, said.

Adetunji said the NNPC has programmed vessels and trucks to unconstrained depots and massive load-outs from depots to various states are closely being monitored.

“We want to reassure all Nigerians that NNPC has sufficient products, and we significantly increased product loading including 24-hour operations in selected depots and extended hours at strategic stations to ensure products sufficiency nationwide,” he said.

“Others include the Independent Petroleum Marketers Association of Nigeria (IPMAN), Nigerian Association of Road Transport Owners, Petroleum Tanker Drivers and other industry stakeholders which will ensure normalcy is returned.”

Adetunji also said NNPC has a national petrol stock of over 2 billion litres, equivalent to over 30 days of sufficiency.

However, a 30-day sufficiency will ensure that the Christmas and New Year holidays season proceed without hitch but will do nothing to ensure long-term sustainability. This is why stakeholders are calling for the immediate removal of petrol subsidies which will allow other players to get in and improve supply.

The recent petrol queues in several parts of the country have left commuters stranded as Nigerians resort to buying the product from black marketers at over N350 per litre on average, which is close to what they would be paying without subsidy.

According to Okoronkwo, petroleum marketers are expected to get the products from tank farm owners at N148.19 per litre but they now receive the products at N185-N210. Analysis shows they are pricing in the inefficiencies and challenges getting the product from Apapa.