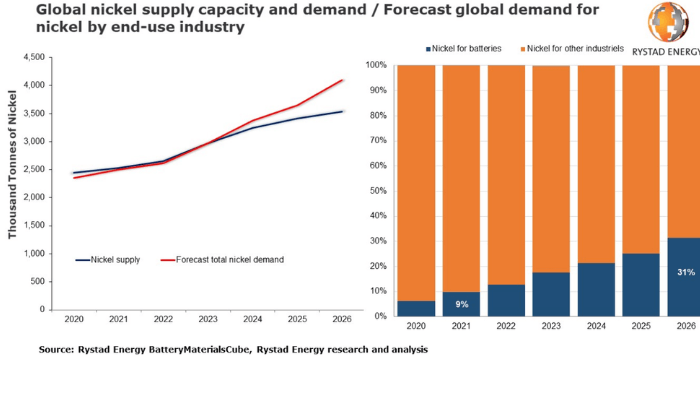 But this could open an opportunity for Nigeria’s vast untapped deposit if it could resolve its security challenges.

According to their analysis, although global supply will continue its steady year-on-year climb to 3.4 million tonnes (Mt) in 2024 from 2.5 Mt this year, rising demand spurred in part by the energy transition will lead to a shortage in less than two years, with a production of 3.2 Mt. This gap will widen quickly to a deficit of 0.56 Mt by 2026.

Nickel is an essential component of the batteries used by many automakers, and a supply shortage could cause numerous headaches and ripples across Western car manufacturing. In addition, the deficit is likely to encourage automakers to assess alternative battery chemistries, as well as search for previously untapped nickel deposits, the analysts said.

“The potential nickel shortage could encourage industry leaders to look to previously unattractive sources of nickel, including deposits in Indonesia. However, the process of extracting nickel from these deposits has inherent risks and challenges, including environmental, social and governance (ESG) concerns,” says James Ley, global energy metals expert and Senior Vice President with Rystad Energy.

The Ministry of Solid Minerals Development in 2016 confirmed the discovery of Nickel in parts of Kaduna State in North-West Nigeria.

Privately-held Comet Minerals who holds the mining license said the deposit is almost pure nickel metal of between 0.1 and 5.0 mm diameter in size, grading at 90 percent nickel, as opposed to more traditional nickel, which needs to be refined to extract the metal.

However, Nigeria has to resolve the security challenges in Kaduna to take advantage of this opportunity as the current crisis does not make a business case for investments.

Rystad Energy expects nickel-based battery chemistries to hold the largest share of the market by 2030, slightly ahead of iron-based batteries, with other solutions trailing far behind these two main groups.

Limited access to nickel could throw a spanner in the wheels of this forecast, however, as the battery industry has to compete for supply with other growing industries, such as steelmaking, they said.

Unlike other essential battery raw materials used for cathodes such as lithium, the battery market is not the dominant end-user for nickel in the short term.

“According to our estimates, the stainless-steel industry accounts for more than 70 percent of current global nickel demand, with the battery market making up less than 10 percent of global nickel metal demand in 2020,” the report said.

Nickel metal demand from the stainless-steel industry is expected to grow at about 5 percent per year, while the market for batteries is poised to explode. In an unconstrained supply scenario, batteries could require more than 1 Mt of nickel metal by 2030, quadrupling from the current demand of 0.25 Mt, the report found.

The experts said the battery market only accounts for 9 percent of the current global supply of about 2.3 Mt, but forecasts the market share could rise to 31percent by 2026 and this demand surge could place huge pressure on the nickel supply chain in less than a decade.

Mining companies are not finding enough new high-grade nickel deposits to keep up with battery production demands. As a result, automakers and battery manufacturers may seek alternative battery chemistries to meet demand, the report said.

Nickel-intensive batteries are the batteries of choice of many Western manufacturers due to their high energy density combined with a lower proportion of cobalt. Cobalt is mainly mined in the Democratic Republic of Congo, where poor ESG credentials make it unattractive for car manufacturers.

Because of the uncertainty and risk of battery-grade nickel supply in the coming decade, automakers may seek to decrease their dependency on nickel and instead opt for lithium iron phosphate batteries, where nickel is not required, for certain models or geographies, the analysts said.

Citing the example of Volkswagen and Tesla who have announced plans to use LFP batteries in their lower-end vehicles as the energy density of these batteries has improved enough to make them suited for electric cars, the analysts said this will help reduce the companies’ long-term concerns over nickel supply and could prove a fruitful path forward for other EV manufacturers.