What to know about Nigeria’s first floating LNG 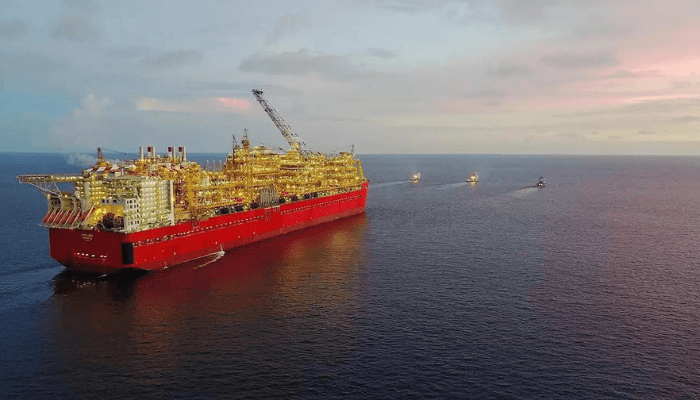 The contract with the three firms essentially entails conducting various studies for UTM Offshore Limited to figure out technical issues and estimate rough investment costs for the FLNG facility prior to the project’s engineering, procurement and construction phase. The timeline for this phase of the FLNG project is 10 months.

The FEED contract signing is a follow-up to the successful execution of the pre-FEED agreement between UTM Offshore Limited and JGC, a leading International engineering design, procurement and construction firm.

The pre-FEED scope was completed within four months from the commencement date. KBR provided due diligence on the JGC scope by conducting a third-party review of all deliverables from JGC during the pre-FEED. UTM Offshore Limited entered into the pre-FEED agreement with JGC and KBR in May 2021.

How does floating LNG work?

FLNG technology makes the production, liquefaction and storage of natural gas possible at sea. LNG is transferred directly from the floating facility to specific carriers, for convenient shipping to countries around the world.

Natural gas is produced from underwater fields, then processed and chilled to -162° Celsius (-260° Fahrenheit). This shrinks its volume by 600 times to create LNG. The advanced design of an FLNG facility packs a typical land-based LNG plant into a fraction of its normal size.

UTM Offshore Limited is pioneering the development of the FLNG facility in collaboration with LNG Investment Management Services, a subsidiary of the Nigeria National Petroleum Company Limited.

The facility, a newly built vessel, will receive gas feedstock from an existing offshore facility, treat it to required LNG standard, liquefy the gas, store the LNG and offload to LNG carriers.

When completed, the floating LNG shall have an LNG production capacity of 1.52 million tonnes per annum (Mtpa), turret and mooring system, gas pre-treatment modules, LNG production modules, living quarters, self-contained power generation and utilities as well as capacities for LNG storage and offloading.

The1.52 Mtpa FLNG facility, with a capacity to process 176 million standard cubic feet of natural gas per day and condensate, will have a storage capacity of 200,000 cubic meters, and would be located 60km from the shore of Akwa Ibom State. It was conceived to serve the global energy market.

UTM Offshore Limited was incorporated in July 2012 as a privately held Nigerian company. A part of an indigenous conglomerate actively engaged in diverse sectors of the Nigerian and international markets which include the Direct Sales and Direct Purchase of Nigerian crude oil-for-products exchange (swap); an established premium provider in subsea engineering, and construction, among others.

It is headed by Julius Rone, an alumnus of the Obafemi Awolowo University, Ile–Ife and the University of Calabar, where he attained his Advance Diploma and Post Graduate Diploma in Business Administration respectively. A seasoned businessman and a renowned philanthropist, Rone holds a membership portfolio in the following professional bodies: the Institute of Directors; the American Society of Administrative Professionals; the American Management Association; the International Association of Administrative Professionals USA; and the Association of Associate Executives.

What it means for Nigeria

The prospect of new foreign exchange earnings from natural gas exports to Europe is why analysts consider the project a game-changer for Nigeria.

“We opted for FLNG because FLNG was originally developed to help realize the promise of natural gas – specifically, to bring gas to the global market from small offshore fields and nearshore terminals in areas lacking infrastructure – especially pipelines,” Rone, CEO of UTM Offshore, said at the deal signing in London on Wednesday.

“UTM Offshore’s signing of the deal will be a game changer within Africa’s gas market. The penetration of FNLG in Africa, which started in Cameroon and expanded to Angola and Mozambique and now to Senegal, Mauritania and Nigeria, highlights Africa’s commitment to unlocking the full exploitation of its gas resources,” said NJ Ayuk, executive chairman of the African Energy Council.

Ayuk said he believes UTM Offshore’s FLNG project development will not only open doors for energy security and GDP growth but will also bring in world-class technical know-how among the local people while creating long-term employment opportunities in line with Nigeria’s local content laws.

The deal, which is being financed by Africa-Exim Bank, is geared to boost export earnings and could dent demand shortages at home with expanded capacity. The FEED contract, according to the project owner, is a step towards a final investment decision expected next year.

“We opted for FLNG because FLNG was originally developed to help realise the promise of natural gas – specifically, to bring gas to the global market from small offshore fields and nearshore terminals in areas lacking infrastructure – especially pipelines,” said Rone.

Timipre Sylva, minister of state for petroleum resources, said the project vindicates the government’s policy towards increasing natural gas production and consumption as encapsulated in its ‘Decade of Gas’ initiative.

And as the world shifts to cleaner energy sources, Sylva said Nigeria is in a vantage position with over 209 Trillion cubic feet (Tcf) of proven gas and a potential upside of 600 Tcf of gas, the most extensive in Africa, and in the top 10 globally.

“However, due to a multitude of factors including a lack of investment, transportation and export infrastructure, and technological challenges, the majority of our gas deposits have yet to be produced.”