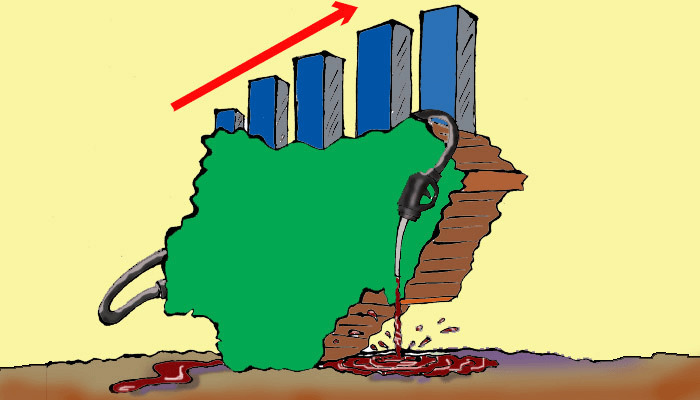 The Nigerian government is weighing declaring a state of emergency in the oil and gas sector following a series of attacks on oil and gas assets in the Niger Delta, the country’s regulator has said.

“The imperative is on Nigeria to declare some sort of emergency in its oil and gas sector,” Gbenga Kofomolafe, commission chief executive of the Nigerian Upstream Regulatory Commission (NUPRC), said at the Association of Nigerian Energy Correspondents’ conference in Lagos on Thursday.

Komolafe, who was represented by Abel Nsa, head of the National Oil and Gas Excellence Centre, a department at the NUPRC, cited oil theft, insecurity as well as ageing and decaying infrastructure as major issues bedevilling the sector.

Rampant sabotage of oil and gas resources is taking a toll on the sector with investors unwilling to commit resources to new projects while increasing pollution in the region.

The Nigerian National Petroleum Corporation Ltd (NNPC) said as much as 200,000 barrels of oil per day was stolen in 2021, with the operation now assuming industrial-scale theft.

“The challenges of seamless production in the form of rampant crude theft and sabotage of critical infrastructure are still with us,” the NUPRC boss said.

He said the commission had developed key initiatives aimed at reducing the menace to the barest minimum in a short while and eventual elimination in the long-run.

“Some of these include a roadmap for tapping the challenges in the industry and implementation of areas between government and operators,” he said.

The government will be tasked with providing security as the commission is liaising with the top security echelon of the Nigerian security network to ensure that government security forces provide pipeline and asset security.

Komolafe said the regulator would enforce the installation of tamper detection technologies as part of the design for pipelines and related oil and gas production facilities.

He said the commission would ensure that operators implement approved security protocols in areas within their control and properly identify and remove illegal connections and conduct remedial works in record time.

He said the commission was working to implement the provisions of the Petroleum Industry Act (PIA) and had developed six regulations to aid the proper implementation of the law.

In line with the provisions of the PIA, several stakeholder engagements were held to get the buy-in and sensitise the industry players.

Others are Domestic Gas Delivery Obligations Regulations and Licensing Round Regulations.

Komolafe said the commission was also in the process of issuing additional seven regulations in phase two of the exercise in consultation with stakeholders in line with Section 216 of the PIA.

While the passage of the PIA has brought an end to marginal fields, operators have now been issued Petroleum Prospecting Licence (PPL) to local operators that are developing previously abandoned fields.

He said the issuance of the PPL had ushered in a new dawn for indigenous operators to hit the ground running in developing their awarded assets in line with industry best practices and to take full advantage of the increasing crude price in the international market.

Mele Kyari, group chief executive officer of NNPC, said resolving the security challenge in the Niger Delta would bring back investments to the oil and gas sector.

“As you are all aware, we’re doing everything possible to contain it. Security is a major challenge regarding crude oil theft,” Kyari said. “We understand today that our production is very low…because of the security situation in the Niger Delta assets.”

Findings by BusinessDay showed that NNPC and its other major partners lost over $1.068 billion in the month of May arising from production shut-in.

According to the report, they lost 9.4 million barrels of crude oil worth about $1.068 billion, based on May’s average Brent price of $113.34 per barrel.

BusinessDay had reported that petroleum subsidy claims surpassed oil and gas revenue from crude sales by N210 billion in the first half of 2022.

Kyari said the NNPC was working with security agencies and other stakeholders to address the issue of oil theft, which was hindering Nigeria’s ability to meet its Organization of the Petroleum Exporting Countries quota.

He said the NNPC’s target was to increase production and bring back domestic refining capacity to ensure energy security.

Kyari said though financing was a huge challenge for the sector, many institutions now recognised gas as clean energy and were willing to invest in the development of Nigeria’s abundant gas resources.

“There is a shortage of supply across the globe and we know for sure that investment in this sector is clearly unavoidable,” he added.

He said NNPC had successfully resolved the disputes it had with international oil companies relating to upstream assets to further drive investments in the sector.

According to her, Africa and indeed Nigeria have high-energy poverty that can be transformed to opportunities by investors.

Joe-Ezigbo said: “We know Nigeria has very vast gas reserves and it is these reserves that we can channel for electricity generation through gas-powered energy plants. Gas also has the potential to be a very key driver of industrialisation or rapid economic advancement, as we’ve seen in several European countries.

“They’ve used gas to power their economies as feedstock and fuel for their industries. And really, we want a situation where Nigeria becomes one of those countries that is listed when we’re talking about nations that have leveraged their resources to build their economies.”