#EndSARS protest: How best to mitigate the losses at least in the future 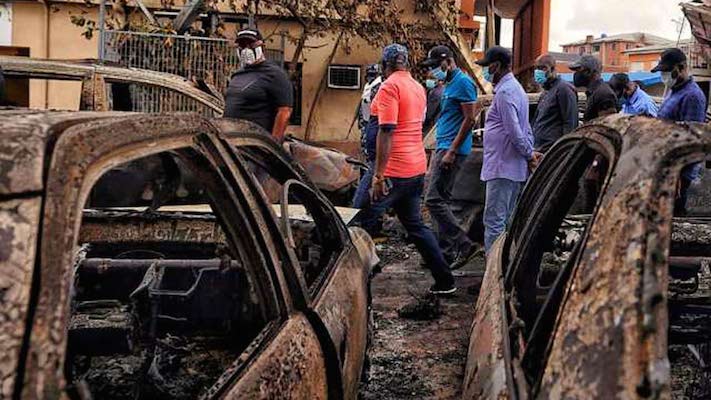 The chickens have finally come home to roost nationwide as the dusts raised by the #EndSARS crisis settle – at least so it seems irrespective of some ripples still being generated by events currently unfolding at the Lagos Judicial Panel of Inquiry and the twist introduced by the International News Medium, Cable News Network (CNN).

In the midst of what seemed to be the confusion, some facts now stare us in the face calling for realistic measures to be taken if losses are to be either avoided or mitigated in the future. It requires that the thinking cap currently being adorned by all stakeholders yield workable solutions that would benefit all.

The crisis was unpredictable and unprecedented

Yes. No one saw it coming, no individual, business owner or even the Intelligence Agencies could predict than soon after the COVID-19 lockdown, another form of lockdown – curfew, would be imposed as a result of massive protests which, though mostly peaceful at the onset was later hijacked by hoodlums. That is the nature of risk. The likelihood of occurrence is always there but the certainty and timing remain unpredictable.

There was massive destruction, looting and loss of lives

The quantum of losses incurred as a result of the crisis is yet to be fully ascertained. It runs into billions of Naira and affected all members of the society – individuals, businesses (both SMEs and big organisations), the government including security agencies, amongst other. Several individuals and organisations are still licking their wounds and yet to recover.

There was Business Interruption

From the free movement of foodstuff and other commodities to regular work processes, the crisis impacted negatively on all, for the period it lasted, with the attendant impact on inflation and revenue generation by government and Business owners.

Several Victims were either uninsured or with inadequate insurance

With the widespread pleas on governments at the federal and state levels by victims for compensation, it is apparent that they were caught unawares and mostly did not take advantage of the protection which insurance offers – to safeguard their lives and assets from the losses. Adequate protection, where in place would naturally be the first recourse in the event of the unforeseen. The Lagos State Government which is itself one of the biggest victims of the mayhem has since offered small businesses in the state a lifeline to compile their losses for possible succour.

The issue of adequate insurance cover by the few who have some form of protection in place also calls for attention. Oftentimes, they go for the basic minimum cover at the most minimal cost without the additional protection for inclusion of the extensions which come at a fraction of the cost. Such extensions include the Strike, Riot and Civil Commotion (SRCC) which happens to be the requisite protection required for damages resulting from the #EndSARS protests.

True, a few insurance companies have since reassured their clients who have the appropriate cover of their preparedness to indemnify them for losses incurred, but their enormity and colossal nature remain a burden on the insurers. This is traceable to a number of factors;

Insurance operates by pooling large risks together out of which the few who suffer losses are offered succour from the premium paid by other members of the pool. Wisdom is therefore inherent in ensuring that the pool is as large as possible for effects of losses not to be too burdensome on the risk bearers. That the level of Insurance Penetration amongst the populace remains abysmally low is no longer news in these climes. What would be news rather, is the game changing strategy that will ensure an exponential explosion of the pool of insurance premium in a manner that will make the service mutually beneficial for all stakeholders – investors and the insured public alike.

Cut-throat competition by players for the provision of cover for the few insurance businesses available is at its peak, leading to low pricing of risks. The irony is such that even while inflationary trend is on the upward climb, premium rates being quoted by some risk providers are on the downward trend – at times ridiculously low, all in an attempt to outbid competitors. The situation is such that the policy extensions on cover granted such as the SRCC referred to, and flood extensions are sometimes offered free of any cost. The result is low underwriting profit, and a periodic inability of some operators to settle claims promptly.

Some individuals and business owners who would ordinarily take advantage of available covers and the extensions to adequately protect their assets are truly not aware of the scope and limitations of available covers. Massive and consistent awareness creation using appropriate platforms to reach potential customers would no doubt be of immense benefit if the pool of insurance service buyers is to be enlarged. Ignorance may not be an excuse in law for offenders but to individuals and business owners, Ignorance of available protection for vital assets may be the determinant factor between remaining afloat in business or suffering from catastrophic losses. The quest to seek knowledge of, and its provision thereof is the responsibility of all.

What could be done

From the foregoing, it becomes imperative that to reduce the impact or ameliorate the effects of losses on those who may be affected by any similar occurrence in future (which is not predictable anyway), adequate measures must be put in place.

First step would be for the risk bearers to be in good stead to carry more risks internally, which is now being addressed with the ongoing industry recapitalisation. With increased capital hopefully comes additional capacity to retain some risks that are hitherto being ceded to re-insurers, and in the process make some savings on costs and be more profitable.

With more funds in the system, additional attention should be given to creation of awareness through the media, traditional and new – including digital channels, to ensure that messages on availability and scopes of cover are adequately disseminated.

Thankfully, the industry regulator, National Insurance Commission (NAICOM) is currently stepping up efforts to ensure that risks and their cover extensions are appropriately priced. Whilst the framework is currently being worked out, there is wisdom on the part of all individuals in ensuring that the assets they worked so hard to acquire are protected from the unforeseen.

The few wise ones who had their assets adequately insured in Nigeria before the protests are currently processing claims settlements from their insurers. Be counted among the wise by taking up insurance today. Aigboghie writes from Lagos.

#EndSARS losses: What assets, business owners need to do to have adequate cover in…