The long-time strategy by International Breweries focusing on increasing the market share ahead of bottom-line growth may have paid off as it has seen it grown market share from single-digit to double-digit, moved up as the second-largest brewer by market share in the country, displacing Diageo-owned Guinness.

However, local investors continue to worry about cost-related issues around the company with many wondering for how long deep-pocket AB InBev-backed brewer continue to burn cash while profit drags.

After the brewer released its full year 2019 interim result for the period ended 31st December last week, shares of the brewer plummeted 8.82percent to N7.75, the heaviest loss since early November last year. 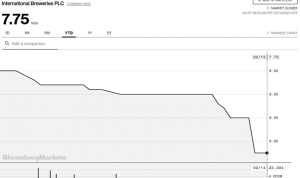 The intense competition, especially from International Breweries created no room for other players to increase prices and pass on the impact of the increase in excise duty to consumers as International Breweries continues to ramp up capacity at its new plant in Sagamu thereby flooding the market with its regional and international premium beer, Trophy lager, and Budweiser while undercutting competitors market share

“Interbrew has always said its priority right, for now, is gaining market share, they are more longterm,” Fola Abimbola, equity analyst at Lagos-based Fbnquest told BusinessDay last year. The gambit seems to be paying off as Interbrew cut into competitors’ market share in the first half of 2019.

“The positive top-line performance was buoyed by the management’s aggressive drive to grow volumes, leveraging on its larger capacities,” said analysts at Lagos-based United Capital in a sector report.

But growth for Interbrew comes at a cost as heavy debt on its balance sheet and repayment cost is telling on bottom-line numbers.

If cost is greater than the revenue, that raises the question of cost efficiency for the company, said an analyst.

Cost has been elevated since the 2017 merger with a surge in personnel cost across the three regions and 4 plants.

A rise in operating expenses and decline in other income meant Interbrew recorded an operating loss of N4.12bn in the quarter after it had recorded N8bn operating profit in the corresponding period of 2018.

There was no finance income but finance cost rose 31.69 percent to N9.24bn which resulted in a loss before tax of N13.36bn versus a profit before tax of N1.14bn in the same period of 2018, driving the beer maker’s earnings per share into negative territories. As at September 30, 2019, the brewer’s total indebtedness stood at N244.9 billion.

The recently concluded N165billion rights issue program which was concluded in December last year by the brewer is expected to remarkably deleverage balance sheet, changed the brewer’s long-term debt replaced with equity, thereby easing the burden of interest payments, increasing management’s flexibility as well as removing volatility in earnings, this is expected to have full impact reflected in 2020.

Prior to the rights Issue, following the completion of the merger of Intafact Beverages and Pabod Breweries with International Breweries PLC in December 2017, the beer-maker continued the construction of the Gateway Plant to address the capacity constraint that has limited its growth.

The construction of the N90 billion plant was largely financed with debt, which led to significant borrowings and altered the brewer’s capital structure from a debt-to-equity perspective.

In 2016, AB InBev acquired SABMiller worldwide and by extension, their subsidiaries in Africa. AB InBev’s majority shareholding in Intafact Beverages Limited and Pabod Breweries Limited were merged with International Breweries PLC through a scheme of merger sanctioned by the Court and Regulatory authorities in order to provide for the optimization of efficiencies, leverage on economies of scale and shareholder value creation.

AB-InBev, controls over 70 percent of the larger International Brewery, with direct and indirect stake of 75.1percent representing the 47.4percent held by SABMiller Nigeria Holdings BV, and 27.7percent held by Brauhaase International Management GMBH. Also, Anambra State Government holds a 4.7percent stake in the beer-maker, while minority holding amounts to 20.0percent.

Prior to the merger, International Breweries, Pabod, and Intafact had established a strong footprint in terms of mainstream value brands in the Sout-West, South-East, and South-South regions of Nigeria respectively. Therefore, the consolidation of the three subsidiaries was a strategic move by AB-Inbev to challenge the continued dominance of Nigerian Breweries Plc (NB) and Guinness in the Nigerian market.

Until the merger, Intafact was incorporated in February 2007. The company’s principal activities included the manufacture, distribution and sale of a variety of alcoholic and non-alcoholic beverages. Its brewery plant is situated in Onitsha, Anambra State. In August 2012, it completed the construction of a 500,000-hectolitre greenfield brewery in Onitsha. As a result, production capacity was increased to 1.2mhl in 2013, and subsequently the current 2.7mhl in 2014. Its product portfolio included Hero lager beer (its flagship product), Eagle lager beer, Castle Milk stout, Grand Malt, Beta Malt, Chibuku, Miller Genuine Draft and Super Shake Yogurt drinks.

Pabod was incorporated in 1978 and situated in Rivers State. After operating for about 7 years, the plant became non-operational for ten years from 1990 to 2000. In May 2000, a process of reviving the brewery commenced, with Brewtech Nigeria Limited acquiring majority of the shares held by the Rivers State Government. Its  production capacity increased steadily overtime, product portfolio included Grand Lager, Grand Malt, Grand Malt Zero, Beta Malt as well as the distribution of Hero lager beer, Eagle Lager beer and Beta Malt, Miller Genuine Draft, Betamalt, Redds, 1960 Rootz, and Voltic Water

Analysts believe that the brewer needs to tame its surging cost of production which it currently unable to pass to cash strapped consumers.

“The consumer market is huge with potentials, however, consumers are price sensitive and any increament would led to them going for cheaper brands,” Wale Adeoye a consumer goods analyst told BusinessDay.

“There is a strong competition in the premium beer segement and this is making it difficult to sell more volumes on its Budweiser brand,” he added.

Sex for Marks: ‘NANS has received 2,000 petitions from students on sexual harassment’