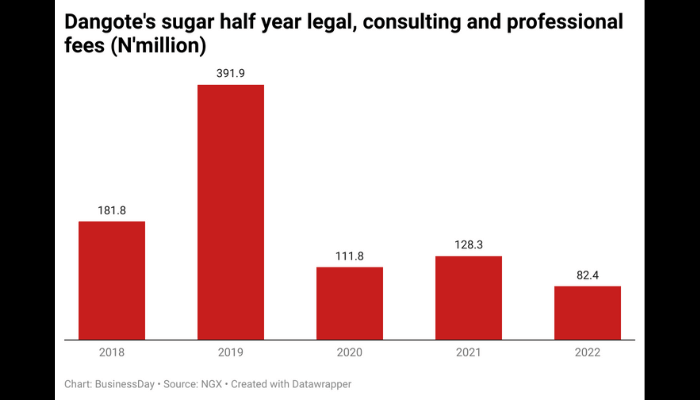 Dangote Sugar, a subsidiary of the Dangote Group paid its lowest legal, consulting, and professional fee in the first half of 2022, and in the last five years, BusinessDay learnt.

In Africa’s biggest economy, it is a statutory requirement for all publicly listed companies to have their accounts vetted and audited by legal and independent auditors.

This is because legal and external auditors examine the bookkeeping records of the companies without the filter of personal relationships, which could cloud their judgment.

Some of the factors that determine legal fees include the size of the company, the industry in which the company operates, corporate risk, profitability, duration of the audit. amongst others.

For Dangote’s sugar, the firm’s legal cost declined to N82 million, a 36 percent drop from N128 million in the first half of 2021.

The legal fee constituted just two percent of Dangote sugar’s total administrative expenses in the first half of 2022.

Administrative expenses declined six percent from N5 billion in the first half of 2021 to N4.6 billion same period in 2022.

Dangote Sugar recorded negative net cash used in financing activities, this increased by 37 percent from N-19.5 billion in half year 2021, to N-12.3 billion half year 2022.