Why is there smuggling? 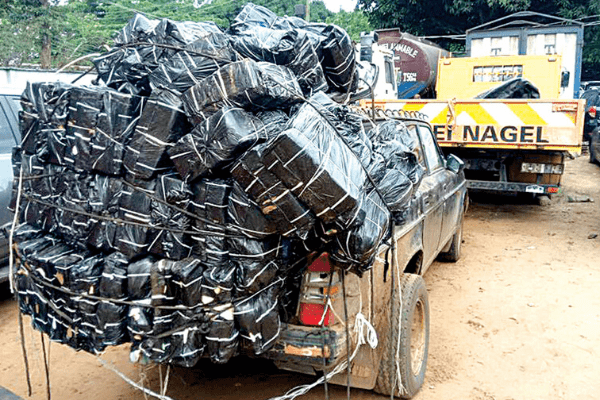 On August 19, the federal government, citing incessant smuggling, especially of rice, and without recourse to the Economic Community of West African State (ECOWAS) protocol that guarantees free movement of goods and people across the region, shut the Western border with Benin Republic indefinitely. “We cannot allow smuggling of the product at such alarming proportions to continue”, Buhari was quoted as saying in a statement issued by his spokesman. Since then, there has been back and forth argument about the merits and demerits of the action with many sympathising with the government. However, there has been no attempt to look at the problem at its root. Why is there so much smuggling of goods into Nigeria?

Read Also:  The rise in the price of rice

The first reason is our dysfunctional ports, which has been adjudged to be the most inefficient and expensive ports in the world.  An analysis on overseas cargo and freight costs by MoverBD, an online resource for international shipping, shows that the cost of shipping 20-foot and 40-foot containers to Lagos ports from the United States (Los Angeles & New York) is the most expensive globally.

For instance, in 2018, it costs about $4, 982 to ship a 20 feet container from New York to Apapa, which is about twice the amount to ship a container of the same size to Cape Town, South Africa (at $2, 542). This is despite the fact that New York to Lagos is just 6,516 nautical miles and takes approximately 27 days for a ship to sail the distance while New York to Cape Town is 9,097 nautical miles and takes approximately 38 days to sail.

In Apapa, the inefficiency becomes world class. Average turnaround time for ships at Apapa is estimated in excess of 30 days as against just two days for the most efficient ports globally. Also, over twelve government agencies, with each demanding inspection and associated fees, litter the ports causing nuisance and increasing the costs for businesses.

What is more, although the access roads to Apapa and Tin Can ports were originally projected to give access to 1,500 trucks, now about 5,000 trucks seek access to the ports every day, according to reports by the Lagos Chamber of Commerce and Industry (LCCI). The report says Nigeria loses N600 billion in customs revenue, $10 billion (N3.6 trillion) in non-oil export sector and N2.5 trillion in corporate earnings across various sectors on an annual basis due to the poor state of Nigerian ports.

A 2019 survey of the ports by the Convention on Business Integrity (CBI) shows the operations of the ports are still riddled with inefficiency and corruption. Some of these include rampant exercise of discretionary powers by port officials, even in matters where there are verifiable guidelines like fee payments, a bouquet of payments made for services not provided, extended port processing time and port charges due to processing delays, poor subscription standard operating procedure (SOP), capacity utilisation at between 38 percent and 40 percent and generally abuse and manipulation of the system by customs officers, port gate officials, stevedores, document clerks and scanner agents.

Just as Nigerian ports are becoming expensive and inefficient, neighbouring ports in Benin and Togo were increasing their efficiencies and lowering costs to attract Nigerian importers. Naturally then, genuine businesses prefer to import through Benin ports and truck their goods into Nigeria – a far less expensive option than landing their goods in Apapa.

Added to the expensive and inefficient nature of the ports, the Buhari government, in 2015, banned rice importation through the land borders and imposed a 70 percent tariff for importation through the ports. This is in addition to the wrong-headed 70 percent tariff on imported vehicles including second hand vehicles, popularly known as Tokunbo cars in local parlance, imposed by the Jonathan administration as part of the automotive policy to support local assembling of cars.

The results have been clear: as legal importation to Nigeria drops drastically, neighbouring countries such as Benin, Cameroon, Niger and others have seen their parboiled rice imports increasing. Ironically, these countries mostly consume white rice (another variant of the staple), whereas they import more parboiled rice, which, considering their population, can last them for a decade. However, they continue to import parboiled rice every year while legal imports continue to decline in Nigeria as smuggling increases exponentially.

Even corporates that used to be the biggest buyers of cars in the country for staff and business activities have since cut down on their demand, monitising it for their staff and outsourcing car services.

More, unfortunately, even Tokunbo or second-hand vehicles are going out of reach of most Nigerians. Now, most of the vehicles imported (through the seaports) are very old and accidented vehicles to avoid the punishing tariffs and levies. A visit by BusinessDay reporters to one of the terminals at the Tin-Can Island Port, Nigeria’s foremost roll-in, roll-out terminals for the importation of vehicles, most vehicles brought in by vessels were mostly low quality and damaged vehicles. The majority of second hand vehicles used by Nigerians are brought in through Benin border or smuggled into Nigeria.

One would think in crafting a solution to the incessant smuggling into Nigeria, the first action point would be to reform the ports to increase efficiency, lower costs and turnaround time. But no, the solution is to blame our neighbours and shut the borders. What is more, it was clear from the beginning that Nigeria has no capacity to satisfy local demand for rice. But in a desperate move to support a powerful cartel of local rice producers, the government is prepared to kill its citizens who will naturally be incentivised to go into smuggling, move millions of its people into extreme poverty and scupper the economic well-being of the country just to support some cartels to milk and extort its citizens.

It amazes me how we, at once, advocate for free trade and at the same time, put barriers to free trade all over. By closing our borders and preventing trade, the government did not spare a minute to think about many Nigerian businesses doing businesses and importing goods to our neighbouring countries.

Anambra govt gets plaudits for support to private sector

The Almajirai ‘uncensored’ movement and the Yobe example