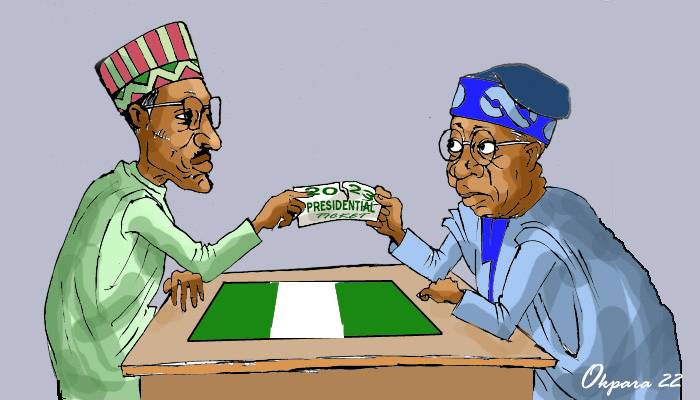 Imagine a 62-year-older adult who has wasted his youth and had to beg to survive. The imaginary 62-year-older person is without any pension nor any income. Their children are all ”Japa” struggling to survive elsewhere. They cannot account for their work life – no investment, no government support for the elderly in the form of social security and receive mockery from people around them. That is what Nigeria could make out of anyone. The country’s risk in terms of financial and protection to lives is so high that our people want to leave the country to go somewhere else.

Kudos to the initiators and the organisers of the Presidential Peace Accord. They meant well for an old Nigeria that could not live up to her name as the giant of Africa. There is no evidence that the peace accord has been adequate. If you want to refer to Jonathan’s acceptance of defeat in 2015, that was due to the person of Jonathan and the misfit of his ability, capacity, and faculty strength to lead Nigeria.

However, the experience in the last eight years has justified the famous saying that half-bread is better than none. A half Goodluck appears better than the illusionary change tickets we bought that have produced nothing but more nightmares. Nigeria has been worse off in terms of standard of living and security in the last eight years. No one can dispute the fact. The fact speaks for itself.

The peace accord became necessary after the failure of the code of conduct signed by the major political parties, which led to the killing of over eight hundred Nigerians in the north due to post-election violence. Suppose Nigeria was to be a country of accountability. In that case, the incumbent president should have been made accountable for some of the killings, given his utterance.

It is a shame for Nigeria to have not matured enough in her leadership selection process and election. Without reducing the psychological impact of the signing of the peace accord, Nigeria and her political leaders are like the shared occupants of a three-bedroom flat where a notice was placed at the toilet: please flush the toilet after use and leave it the way you wanted to meet it. That attests to the lack of discipline on the part of all the occupants of their shared apartment.

The notice is a sign of the lack of personal capacity to keep things in a hygienic condition after use. That is what the Presidential Peace Accord signing and its elaborate ceremonies are in present-day Nigeria. We are simply shouting at the top of our voices to the world that we cannot control ourselves, and having a credible election where losers and winners accept the verdicts of the electorate is impossible.

As good as the initiative is for our situation, it is a sign of distorted growth, lopsided maturity, and a nationally protracted shamelessness for Nigeria at 62

As good as the initiative is for our situation, it is a sign of distorted growth, lopsided maturity, and a nationally protracted shamelessness for Nigeria at 62. The giant of Africa cannot be civil but expect violence before and after her electioneering process. There is no fire without smoke. There are root causes of our failure to be civilised and make elections into political offices do-or-die events.

Before I explore the root causes of our electioneering shamelessness, it is noteworthy to comment on the efforts of INEC and the current and previous administration’s support to make our votes count. The actions included the detection of double registrations in the voters’ registers, using PVC card readers and online publications of results. However, our political leaders’ deliberate desire to keep most of the population in the north uneducated, un-informed and gullible to political manipulations is worrisome.

We have been dealing with its consequences through the insurgencies, kidnapping and banditries; unfortunately, all Nigerians suffer it. We might avert double voting and rigging of elections. What we will leave to curtail for a long time are the minds enslaved based on religion and lack of access to primary education.

Read also: How signing Peace Accord with Jonathan brought order in 2015 – Buhari

The primary root cause for the need to sign a peace accord that demonstrated a lack of progress at 62 was the over-concentration of power in the central and the desperation of the northern elites to want power. Unfortunately, the power has done more disservice to the region due to the selfishness of the political office holders. We have not produced selfless leaders anywhere, and the southern collaborators and cabals have damaged our big elephant.

Our elephant has refused to dance, thanks to our leaders who had failed to liberate the minds of their people but enslaved them for their personal and political gains. The unwarranted benefits and perquisites attached to the political offices are too lucrative and breed desperations. These were the reasons a bank’s managing director would resign from his top career position to become a member of the House of Representatives.

That is why someone who was a state governor for eight years returned, joined the political party he once opposed and is contesting for the senate after twelve years of office. What an unproductive set of leaders we are recycling in Nigeria. Indeed, we cannot make progress with this crop of political elites and leadership.

Sequel to the above, the high rate of the out of school children, the over-focus on religious education and the regional agendas -northern and southern agenda have produced a lopsided country where the south with a few voters can reason out but with a north with mass voters who cannot make informed decisions except as directed. That is my fear of the Obedience Movement.

As reasonable and average as the movement is, the possibility of getting to do last-minute education for most northern voters is remote. I agree with Atiku Abubakar’s position that his voters are not on social media. This is where Datti Baba Ahmed, Peter Obi’s running mate, will count his cost or failure to the Obedient movement except if he can deliver on the votes of the north. Whatever happens, the momentum and the validity of Peter Obi’s campaign will be a platform for a change Nigeria cannot wait to witness before her 70th birthday.

We need to have moved beyond violence in elections. It started in the first republic and ought to have been forgotten if there were institutions that identified and punished offenders. Many lives have been lost without any accountability. Some members of the NYSC who were talents and breadwinners of their families were murdered in the north in the aftermath of Buhari’s loss in 2011. We should not, at 62, be wasting public funds on a colossal signing ceremony instead of celebrating developmental strides.

It is a shame that we have not been disciplined enough and built institutions and mindsets that make for easy transitions and elections. I doubt if Nigerians are the beneficiaries of the Presidential Peace Accord. The signing of the peace accord and its elaborate expenses is an attestation of developmental and mindset backwardness with pride.