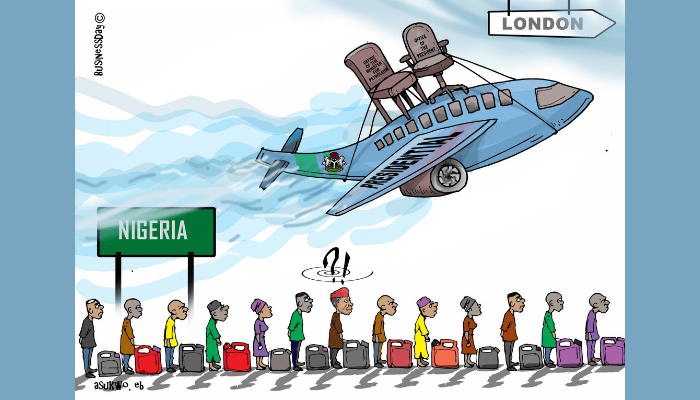 It was always going to be the discussion highpoint of the LABAF week. Toyin Akinosho, one of the organisers, had been kind enough to send you a personal invitation.

Up in the auditorium quaintly named ‘Kongi’s Harvest’, the discussion was already lively when you arrived.

The Lagos Book and Art Festival – LABAF – was in its twenty-fourth instalment. The theme for its 2022 oeuvre was ‘Pathways to the Future’. This year’s edition was dedicated to Bruce Onobrakpeya, the celebrated artist and sculptor who recently turned ninety.

The session was tagged ‘The Biography Session’, and the sub-theme was a question – ‘Is the future bound to the past?’ Two people who had recently published their biographies were on the dais, facing a rapt audience. Each of them was a man who, for you, held a certain mystique, and a compelling gravitas.

Professor Itse Sagay’s biography was titled ‘All Will Be Well’. Yemi Ogunbiyi’s was ‘The Road Never Forgets’.

Yemi Ogubiyi held the microphone. His voice was rather hoarse, forcing his audience to listen closely.

The publisher and author did not disclose to the audience if the President broke the dreaded news to his dear wife, and contained the fallout, but it may be assumed he did, for he was not called ‘Maradona’ by Nigerians for nothing

You had picked up a copy of Ogunbiyi’s book on the corridor upstairs. A little over five hundred pages, including the index.

Ogunbiyi was reading from his book and pausing in-between to expatiate. The most hair-raising stuff came out with a matter of fact, deadpan expression, as though these were things that happened every day.

He was Chairman of Daily Times, then the most powerful newspaper in Nigeria. One day he went to see President Ibrahim Babangida – at Dodan Barracks. IBB, ever perspicacious, observed that he was not looking his usual ebullient self. He tried to fob him off, but the military ruler insisted he should tell him what was bothering him. Something unforeseen had happened in his romantic life, and he was in a delicate situation in his marriage.

‘Have you told Shade the news?’ the military ruler enquired, through his wide-toothed grin.

‘No – no’ replied the timorous husband.

‘Don’t worry. I will come to dinner in your house…’

It was unheard of for a military President to invite himself to anyone’s house for dinner so casually, with all the security and other implications, Yemi reasoned. Still, knowing his friend and boss, he took the precaution to get his wife prepared, and invited Wole Soyinka to join him.

Sure enough, at the appointed time, IBB arrived at his residence at Cooper Road, Ikoyi. He was driving himself.

The publisher and author did not disclose to the audience if the President broke the dreaded news to his dear wife, and contained the fallout, but it may be assumed he did, for he was not called ‘Maradona’ by Nigerians for nothing. He was exceptionally gracious to his hostess throughout the evening, and after he casually let it drop that he was considering creating more states in Nigeria, one of which would be an Osun State, he asked her where she thought the capital should be located. Common sense would ordinarily have dictated Ile Ife. It was clear IBB had something else in mind.

‘What do you think, Shade?’ he asked his hostess pointedly, giving her the air of someone invested with responsibility for an earth-shaking decision.

She took the bait.

The President jumped at the answer.

‘Ibrahim, you have already made up your mind’ Wole Soyinka remarked wryly – or words to that effect.

Itse Sagay is a man with a daunting reputation in legal circles, and in civil society. He is also a man with a strong mind of his own. When he elected to serve the Buhari government as Chairman of a Presidential Advisory Committee Against Corruption (PACAC), many eyebrows were raised among his former students, who thought they knew him as an apolitical stickler for law and order. Up close now, as he took his turn on the microphone, he spoke about the edifying experience of studying at Government College, Ughelli. The boarding houses were named after Europeans who had played important parts in the history of the famous College. After Independence, local bigwigs changed the names of the houses to their own. Then when a military coup came, the military governor changed the names all over.

‘The morality of those days can never be regained’ he asseverated, referring to the days when he was in school, and comparing them to the morass of the present day.

Ogunbiyi talked about the experience of coming back after lecturing at Ife to become the Chairman of the Governing Council of the University. He had once asked the VC to calculate the difference between the University’s annual subvention from government and what it would take to run a really good university. The shortfall was more than twenty billion naira. Not one to sit on his hands, Ogunbiyi led the Council to negotiate international finance for a gargantuan agricultural scheme that would have earned the University billions in IGR annually. There was only one condition the financiers stipulated. The Council had to stay in place at least four years to see the project to maturity. A few months later, the Council was sacked.

Sagay softened his stance as questions flew in from the audience. Nigerians can improve, will improve. He was optimistic about the future. Ogunbiyi accepted that creativity, not ideology, would solve the problem of university finance, with his story as a case in point. Sam Omatseye had read both biographies and was worried journalists and the public did not know enough about their past to give informed opinion. Femi Falana chided some Yoruba activists who did not know that it was Obasanjo, not the Fulani, who took over their region’s showpieces – WNBS – ‘First in Africa’, and UNIFE. A lawyer quipped that Prof Sagay had been a teacher much dreaded by his students at Ife, but that one of his peers with whom he learned Contract Law from Sagay was now teaching the world Contract Law at Oxford University.

It was a jolly good evening of conversation. Everyone said so.